Image for representation only
CHENNAI: When a few psychiatrists handed out questionnaires to 900 people in five Indian cities to explore public attitude towards them, the response made them cringe: At least one in every three said doctors treating psychiatric patients were mentally ill themselves, while one in five couldn’t decide.

The study published recently in the peer-reviewed Indian Journal of Psychiatry shows that despite greater awareness on mental healthissues, a majority of the respondents who had deep religious beliefs or had less than higher secondary school level education still viewed psychiatrists with suspicion

The survey covered people aged between 18 and 65 years in Chennai, Kolkata, Hyderabad, Lucknow and Mumbai.

Researchers found that public attitude towards the subject was correlated to religion, gender, education level and access to healthcare. “Based on the response received, on a median scale of one to five, we arrived at a mean score of around three – one being positive perception and five, negative,” said neuro-psychiatrist Dr A K Tandon of AKT Neuropsychiatric Centre, Allahabad, who conducted the survey with 11 other psychiatrists and psychotherapists, including from Germany and Austria. 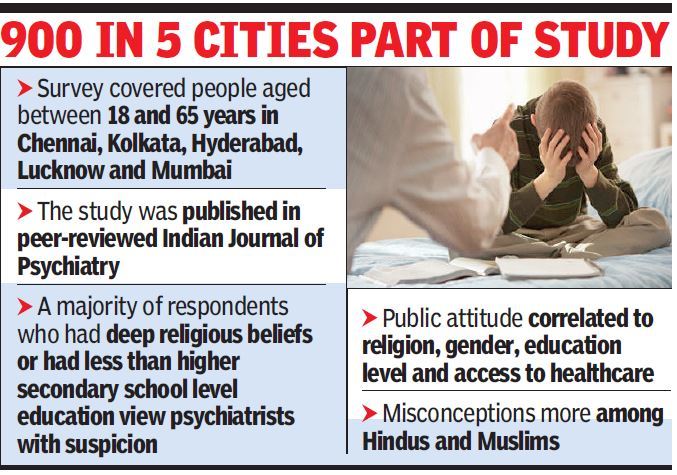 Even for the educated, the study found, psychiatrists are the first call for help for less than 10% of the people. The rest first go to general practitioners, faith healers, astrologers and alternative medicine practitioners before finally approaching a qualified shrink.

The rest first go to general practitioners, faith healers, astrologers and alternative medicine practitioners before finally approaching a qualified shrink. Dr Tandon said a previous survey by the team to explore public perception in Chennai and Kolkata furnished similar results: Close to 40% said psychiatrists choose the profession as they have personal problems; one in three doubted if psychiatrists were genuinely interested in patients’ well-being, while 60% felt the medicines prescribed are to calm and not heal. The study attributes such perceptions to media which portrays psychiatrists in poor light, while faith healers are shown as having the power to heal. Mental ailments are linked to the supernatural.

The team found misconceptions are more prevalent among Hindus and Muslims, attributing the trend to their attitude which considers non-biomedical therapies more effective. “Many respondents believed prayer alone is sufficient treatment for psychiatric disorders,” said Dr Tandon. Two-thirds of psychiatric patients attributed their symptoms of schizophrenia to religious causes. “If this is the state in metros, in rural areas, the situation could be much worse,” he said. Psychiatrists say they don’t discourage magico-religious modes of treatment as long as patients receive simultaneous help from qualified doctors.

“Religion is a way of life. Many of my patients follow both simultaneously with positive results,” said Dr R Tara, director of Chennai-based Schizophrenia Research Foundation. National Institute of Mental Health Neuro Sciences director B N Gangadhar, said he now had patients who introduce him to their guests as their psychiatrist. “This was unthinkable a decade ago,” Gangadhar said.https://timesofindia.indiatimes.com/india/1-in-3-indians-thinks-shrinks-are-mentally-ill-says-survey/articleshow/61601592.cms