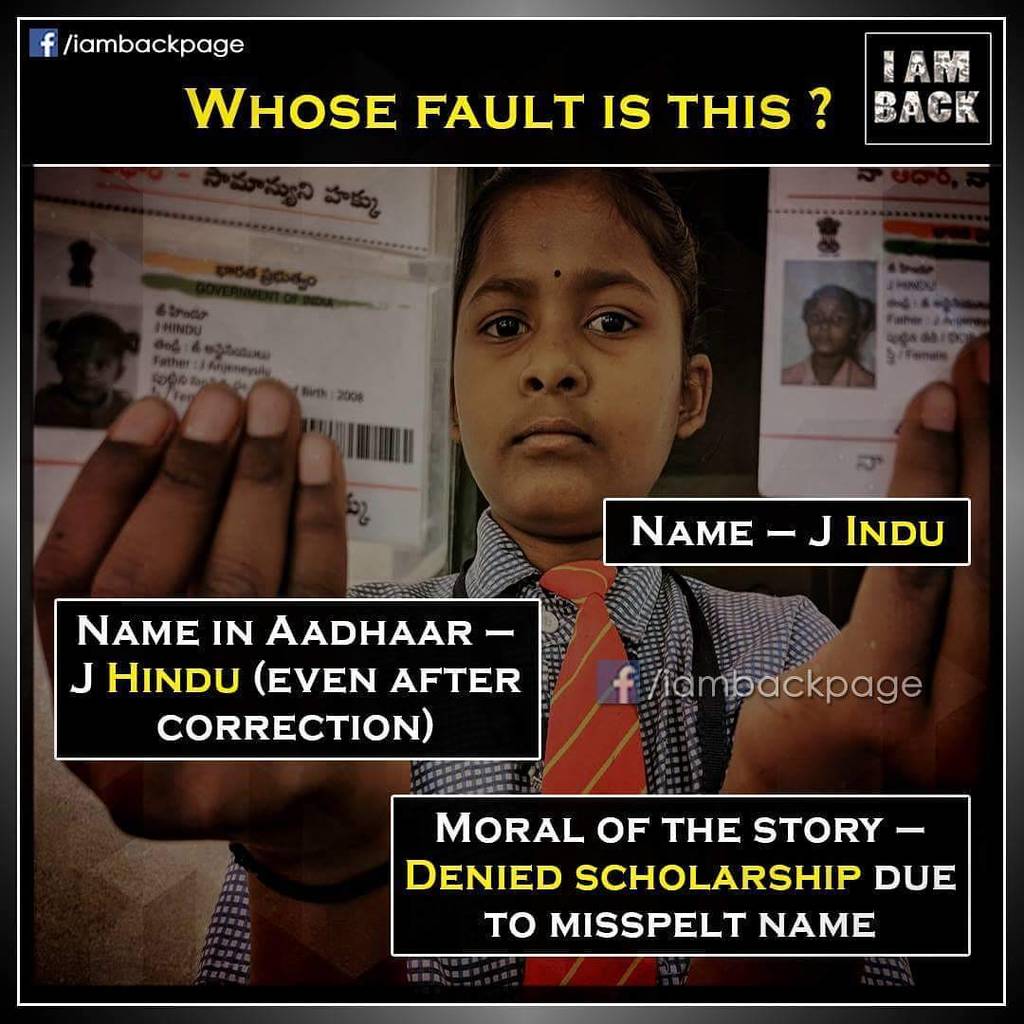 A 10-year-old Dalit girl besides four other children, all students of class V in Andhra Pradesh, won’t get their scholarship this year owing to misspelled names on their Aadhaar cards

A 10-year-old Dalit girl J Indu and four other children, all students of class V studying in a government primary school at Amadagur in Anantapur district of Andhra Pradesh, won’t get their annual scholarships this year. Reason: Their names are wrongly spelled on their Aadhaar cards.

“Three of the other four students are, like Indu, Dalits. One is a Muslim,” according to a report published by People’s Archive of Rural India (PARI). “Amadagur is one of the poorest mandals in Anantapur district of Andhra Pradesh.” The parents of the children at this school are mostly marginal farmers or agricultural labourers, who occasionally migrate to Bengaluru for work, the report says.

So J. Indu and four other students in the fifth standard of the government primary school at #Amadagur, won’t get their scholarships this year, simply because their names are wrongly spelt on their #Aadhaar cards. #AadhaarMythBuster#DestroyTheAadhaar

“My name is Indu, but my first Aadhaar card made it ‘Hindu’. So I applied for a new card (seeking a correction), but they made it ‘Hindu’ again,” the girl has been quoted as saying.

When the trouble began, according to report, Jagarasupalli Indu’s school and family had sought a new card for her. “Her date of birth and a new photograph were registered again and an updated Aadhaar card was indeed issued. But her name, on this card too, remained ‘Hindu’. This prevents Indu’s school from opening a bank account on her behalf – an Aadhaar card with her correct and matching name is mandatory for that purpose,” the report claims, adding that the four other students, all boys, face the same predicament.

The PARI report further adds: “Students of scheduled caste, scheduled tribe and backward class backgrounds in Andhra Pradesh are entitled to a government scholarship of Rs. 1,200 per year from the fifth standard onwards. Of the 23 students in this standard in the Amadagur school, only one belongs to an upper caste. The scholarship money for Indu and 21 other students would normally be deposited in their bank accounts sometime this coming February. Only, these five children have no accounts.”

Stating that this is no happy new year for Indu and her four classmates, the report quoting school headmaster S Roshiah adds: “parents use the scholarship money to buy their children those ‘things the government doesn’t provide, like pens, extra books and sometimes even clothes’”.