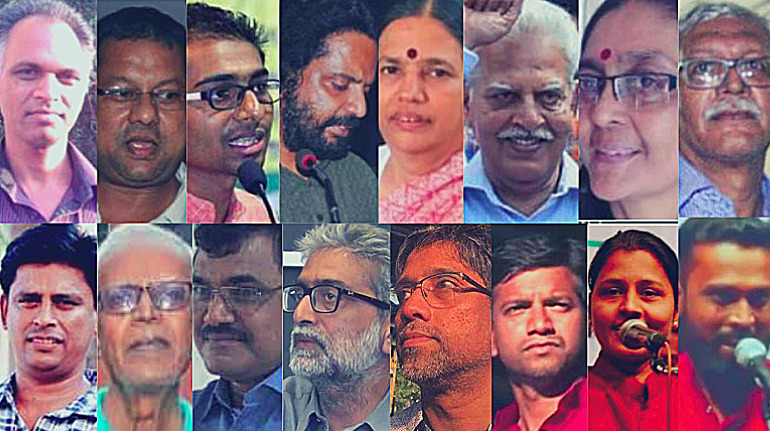 Over 100 academics, activists, and writers issued a statement on Tuesday demanding immediate and unconditional release of all those arrested in connection with the violence at Maharashtra’s Bhima Koregaon in 2018 and the Elgar Parishad event before it. They condemned the continued incarceration.

Jesuit priest Stan Swamy, 84, the oldest of 16 activists and lawyers arrested on charges of conspiring to foment violence at Bhima Koregaon under an anti-terror law, died in July after spending over eight months in jail awaiting trial.

The National Investigation Agency has claimed the Bhima Koregaon violence was a “well-chalked-out strategy” for which the accused were in touch with Maoist leaders. In February, Wilson moved the Bombay high court seeking the quashing of criminal proceedings against him after an American digital forensics consulting company concluded that fabricated evidence was planted in the electronic evidence including a laptop and thumb drive. The devices were seized from his residence in April 2018, and he was arrested two months later over it.MORE FROM THIS SECTION

The statement said all the arrested have worked for the assertion of the most oppressed and marginalised in society and “spoken out against majoritarian Brahmanical Hindutva forces, Brahmanical patriarchy and upheld the right to life, land, livelihood and dignity.” It added Swamy died as an undertrial due to “apathy and sheer criminal neglect”.

“Along with timely justice, it is imperative that his co-accused are guaranteed the fundamental right to a life with dignity.”

The signatories to the statement include writer Amitav Ghosh, filmmaker Anand Patwardhan, and academic Zoya Hasan. They accused the government of “protecting” the perpetrators of violence against marginalised and oppressed communities. “These are the actions of a retributive regime, a regime that upholds Brahmanical Hindutva fascism beneath the veneer of a constitutional democracy.”

The statement referred to the Pegasus snooping controversy and condemned the “use of digital surveillance as a weapon by the government”. It said digital surveillance “makes a mockery of the principles of democracy and exposes the vacuity of the claims of national security”.

“The use of highly advanced and tailored digital attacks on human rights activists, journalists, judges, lawyers, politicians and a broad range of citizens of this country shows the desperation of a government teetering on the edges of the law and the manipulation of the state machinery to serve its ends.”

The government has neither confirmed nor denied the use of Pegasus spyware to hack the phones of ministers, politicians, businessmen, activists, and journalists.