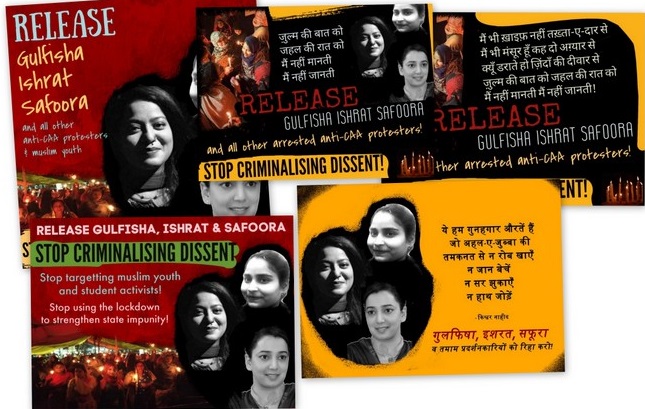 About 1, 100  from all over India – organisations and individuals across religion, class, caste, ethnicity, ability, sexuality and genders – have issued a solidarity statement condemning what they have called “the targeted crackdown on Muslims and women activists in Delhi”, who were at the forefront of protests against the Citizenship Amendment Act (CAA), National Register of Citizens (NRC) and National Population Register (NPR).

The statement notes, “The Delhi Police, at the behest of the Union Home Ministry is brazenly rounding up people under the cover of the Covid lockdown”, denouncing “false narratives that try to link anti-CAA protests with the violence in Delhi”, even as demanding action against those who whom they consider as “actual instigators and perpetrators of communal violence”, including BJP leaders Anurag Thakur, Kapil Mishra and Pravesh Verma.

Seeking “full disclosure of arrests and detentions from Delhi Police”, and “withdrawal of false cases and immediate release of all political prisoners”, the statement particularly takes strong exception to “sedition charges” against three young Muslim women “who were at the forefront of peaceful democratic protests and not involved with violence in any way, unlike what the Delhi Police is alleging.”

These are: Gulfisha, 25, an MBA student, who was reportedly arrested by the police on April 9, but continues to languish in judicial custody “without proper access to her family or lawyer”; Safoora Zargar, 30, a member of the Jamia Coordination Committee, arrested despite being three months’ pregnant, and Ishrat Jahan, former municipal councillor, in jail for over a month now and is allegedly “subjected to custodial torture.”
Prominent among the signatories include activists Annie Raja, Medha Patkar, Farah Naqvi, Aruna Roy, Shabnam Hashmi, Kavita Krishnan, and Meera Sanghamitra; academics Zoya Hasan and Jayati Ghosh; authors Meena Kandasamy and Gita Hariharan; journalist Pamela Philipose; theatre personality Maya Rao; and film maker Aparna Sen.

We, the undersigned, strongly condemn the brazenly malicious attacks, arrests and intimidation by the Delhi Police of Muslim women, students and activists, as well as other citizens who have spoken up against the unconstitutional moves of the present ruling dispensation.
Media reports that about 800+ anti-CAA protesters have been detained or arrested since the Covid 19 lockdown, which means they have had little or no access to lawyers and legal aid, and their families given no information of their whereabouts for extended periods after they were in custody.
The impunity with which the Delhi Police is carrying out this sweep under direct orders from the Home Ministry is facilitated by the reduced media, public and legal scrutiny under the lockdown.
As feminists we decry this systematic crackdown on, and misrepresentation of, the peaceful and constitutional anti-CAA-NRC-NPR movement. Led so powerfully by Muslim women across the country, these protests witnessed a new wave of women stepping out in their own neighbourhoods in huge numbers, defying social structures and asserting their rights as citizens of a secular, democratic republic — one of the most historic moments and movements, since independence.
In Delhi itself, from the Dadis of Shaheen Bagh to the spirited women from Jamia, Hauz Rani, Jama Masjid, Nizamuddin, Seelampur, etc, the women’s spectacular leadership and the solidarities they formed across communities and locations inspired millions across the world, but evidently, also shook the foundations of the ruling elite.
After all, until these women organised themselves with such clarity, and commitment to democratic values, the only use the government had for them was as symbols of repression to be ‘saved’ from Muslim customary practices such as the Triple Talaq.
Gulfisha, 25, is one such young Muslim woman who emerged a leader in the Seelampur anti-CAA protest. An MBA student, Gulfisha has reportedly been arrested by the police on 9th April, but until this day, the details remain blurry. She has been languishing in judicial custody under false charges of sedition, without proper access to her family or lawyer.

The Covid lockdown has brought jail mulakats to a standstill, and no alternative means of communication such as telephonic contact are available to be apprised of her state of health or well-being. The same holds for numerous men from Seelampur who were allegedly picked up by the police at about the same time as Gulfisha, although their exact whereabouts are not known.
Safoora Zargar, 30, member of the Jamia Coordination Committee has been arrested despite being three months’ pregnant — at a time when overcrowding in prisons and have become a huge concern worldwide.
Former Municipal Councillor, Ishrat Jahan, active in the Khureji protest has been in jail for over a month now, and been subjected to custodial torture. Her co-accused, Khalid Saifi emerged from police custody with both his legs as well as two fingers broken—indicating brutal torture.
We have good reason to fear for the rights and safety of Gulfisha, Safoora, Ishrat and others like them: as women, as undertrial prisoners, and as those falsely charged under the draconian Unlawful Activities Prevention Act (UAPA).
Some of the other student activists arrested and slapped with draconian charges and sent to judicial custody include Meeran Haider (President, RJD Youth Wing, Delhi), Sharjeel Imam (JNU scholar), Shifa-Ur-Rehman (President, Jamia Alumni Association). Dr Umar Khalid of United against Hate has also been reportedly slapped with UAPA and is ‘under investigation’.
In an unprecedented and shameless move, the Delhi Police has now even booked Zafarul Islam Khan, chairman, Delhi Minorities Commission under sedition charges!
We must remember that inspired by Shaheen Bagh, sit-in protests led by Muslim women were held in 200+ locations across the country.
Holding up images of Savitri Bai, Fatima Sheikh, Babasaheb Ambedkar, painting protest graffiti and reading the Preamble, reciting poetry and slogans upholding constitutional values and communal harmony, this was a tremendously powerful assertion of rights and resistance, of historically marginalized women creating the possibility of a new nation of emancipation, justice, equality and dignity.

In response, the majoritarian forces of the Hindu right, shifted the register of contestation by unleashing multiple attacks on these gatherings, culminating in a pre-planned communal pogrom targeting the Muslims in North-East Delhi.
The government, unwilling to dialogue with the women, chose the masculinist response of trying to crush them. Its message is clear — those who dare challenge its fascist, patriarchal, communal, classist and casteist nature will be meted the harshest State sanctions.
Countless detentions, interrogation and intimidation of women and student activists from many anti-CAA protest sites and Universities like Jamia, bear testimony to how brazenly the State is using everything, including the pandemic, to silence more than just one Gulfisha or Safoora; to warn all Muslim women who dare to speak out.
For minority communities to exist in India today seems to be a provocation, for them to question and think seems to be a greater trouble, and of course, to protest and sing songs of azaadi is apparently just too much.
Not surprisingly, a malicious and false narrative that ‘the peaceful protests by women were the cause of the violence in Delhi’ has been propagated by the police, fanned by sections of the media and vested interests to camouflage the explicit political nature of the violence, carried out with the collusion and participation of security forces.
Despite claims by the police of ‘finding the real culprits’, the organized and premeditated nature of the violence on the minority community and the great asymmetry in losses and deaths between affected communities is yet to be accounted for.
Right-wing leaders of the BJP such as Kapil Mishra and Anurag Thakur who openly threatened violence have not even been named in FIRs. Those who fired at gatherings are out on bail. Reports of ‘out-of-towners’ brought in to perpetuate the violence have yet to be subjects of investigation.
After all of this, the community which bore the brunt of the communal violence most, including the peaceful women protesters and men, is being projected as the ‘aggressor’ and demeaned in numerous ways through vicious propaganda. Hundreds of Muslims are being picked up and incarcerated.

Led so powerfully by Muslim women, these protests witnessed a new wave of women stepping out in their own neighbourhoods

There is no clarity on the total number of FIRs, arrests and detentions. Muslim women and other activists who worked with them in solidarity towards a shared concept of citizenship and feminist sisterhood are also being systematically vilified.
Media reports that in the last some days, the police has seized the phones of AISA activist Kawalpreet Kaur and few activists of Pinjra Tod. Worrying accounts of women students who were active in the peaceful protests being targeted are also coming also to the fore.
Taking cognizance of such ground realities, the Delhi High Court as recently as on April 27, directed the Delhi Police to comply with the DK Basu guidelines regarding arrests and detentions.
In the long run, these attacks by the State will affect far more than members of just one community. Much like the NRC project that is bound to deprive the poor and marginalized across religious groups of citizenship rights, the present focus on terrorizing Muslims instead of tackling the Covid-19 pandemic reveals a deep apathy towards safeguarding the lives and well-being of millions of toiling poor across the country, many of whom belong to the ‘majority’ community.
We remember with hope and inspiration the vibrant anti-CAA protests across the country from December to February. We remember that while the state was firing tear gas shells in libraries and mercilessly lathi-charging peaceful protesters and students, while the police stood by as vigilante gunmen opened fire, these protesters stood strong and fearless in their determination against the Hindutva project.
They are the conscience keepers of the nation, and we salute them! The actions of the State only reveal how much it fears such voices, and how far it will go to subvert the cause of truth and justice. We declare our unflinching solidarity with the Muslim women, students and activists who worked together as harbingers of peace and shall defeat sinister attempts to project them in bad light by the state and vested interests.
We demand:

To this oppressive regime, we say yet again: