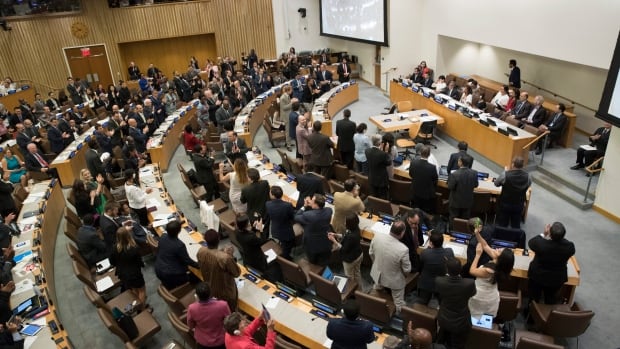 Delegates give a standing ovation after a vote by the conference to adopt a legally-binding instrument to prohibit nuclear weapons Friday at United Nations headquarters. (Mary Altaffer/Associated Press)

(Note: CBC does not endorse and is not responsible for the content of external links.)

More than 120 countries approved the first-ever treaty to ban nuclear weapons Friday at a UN meeting boycotted by all nuclear-armed nations.

To loud applause and cheers, Elayne Whyte Gomez, president of the UN conference that has been negotiating the legally binding treaty, announced the results of the “historic” vote — 122 nations in favour, the Netherlands opposed, and Singapore abstaining. Canada did not take part in negotiations.

“The world has been waiting for this legal norm for 70 years,” since the use of the first atomic bombs on Hiroshima and Nagasaki in August 1945 at the end of the Second World War, she said.

The treaty is “the first multilateral nuclear disarmament treaty to be concluded in more than 20 years,” Whyte Gomez said.

It will be opened for signatures in September and come into force when 50 countries have ratified it, she said.

In December, UN member states overwhelmingly approved a resolution calling for negotiations on a treaty that would outlaw nuclear weapons, despite strong opposition from nuclear-armed nations and their allies who refused to participate in the talks. 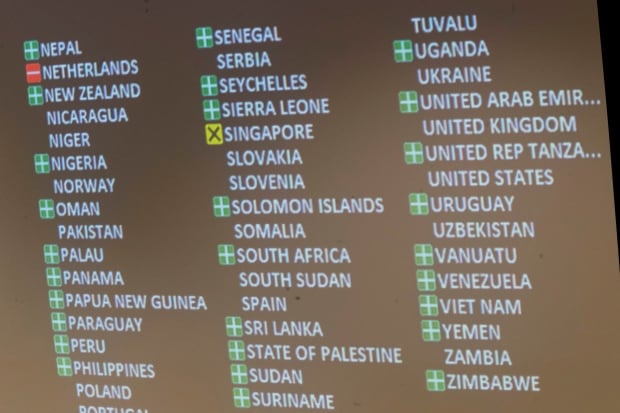 Friday’s vote was 122 countries in favour with the Netherlands opposed and Singapore abstaining. Canada did not take part in negotiations. (Mary Altaffer/Associated Press)

Whyte Gomez said 129 countries signed up to take part in drafting the treaty, which represents two-thirds of the 193 member states. But all nuclear states and NATO members have boycotted the negotiations except for the Netherlands, which has U.S. nuclear weapons on its territory and was urged by its parliament to send a delegation to the negotiations.

Canada has long been critical of this attempt to ban nuclear weapons and did not take part in the negotiations, saying they “will not address concrete measures to eliminate nuclear weapons,” according to a statement today from Global Affairs Canada.

The U.S., U.K. and France said in a joint statement on the treaty, “We do not intend to sign, ratify or ever become party to it.” They argue “the ban treaty is incompatible with the policy of nuclear deterrence” and therefore it ” will not enhance any country’s security, nor international peace and security. It will do the exact opposite.”

The treaty requires of all ratifying countries “never under any circumstances to develop, test, produce, manufacture, otherwise acquire, possess or stockpile nuclear weapons or other nuclear explosive devices.”

It also bans any transfer or use of nuclear weapons or nuclear explosive devices — and the threat to use such weapons. 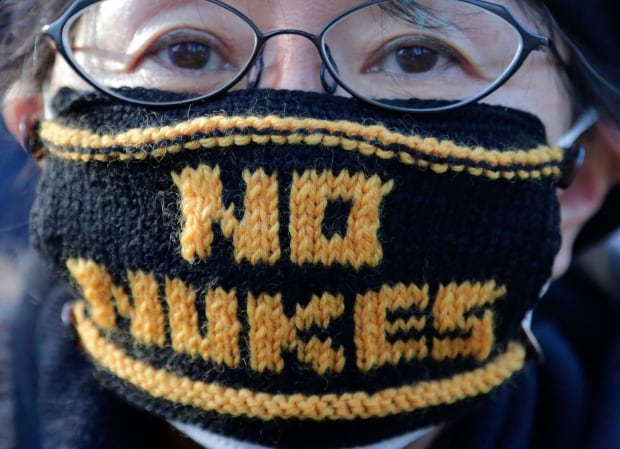 An anti-nuclear protester wears a mask with a slogan ‘No nukes’ as she participates in a march in Tokyo in December 2013. (Shizuo Kambayashi/Associated Press)

Retired British Royal Navy Cmdr. Rob Green, who flew nuclear strike aircraft and is now co-director of the Peace Foundation’s Disarmament and Security Centre, said earlier this week that “the heart of this treaty” is the prohibition on threatening to use nuclear weapons.

Richard Moyes, managing director of Article 36, a British-based organization that works to prevent harm from nuclear and other weapons, said it isn’t plausible to think the world can maintain security based on mutually threatening to incinerate hundreds of thousands of people with nuclear weapons “when we know there have been near-misses, errors of judgment — there’s been accidents — and there’s a degree of instability in the political leadership in the world.”

None of the nine countries known or believed to possess nuclear weapons — the United States, Russia, Britain, China, France, India, Pakistan, North Korea and Israel — is supporting the treaty.

The United States and other nuclear powers instead want to strengthen and reaffirm the nearly half-century-old Nuclear Nonproliferation Treaty, considered the cornerstone of global nonproliferation efforts.

That pact sought to prevent the spread of atomic arms beyond the five original weapons powers — the U.S., Russia, Britain, France and China. It requires non-nuclear signatory nations to not pursue atomic weapons in exchange for a commitment by the five powers to move toward nuclear disarmament and to guarantee non-nuclear states access to peaceful nuclear technology for producing energy.

North Korea’s nuclear and ballistic missile tests, including its July 3 launch, have become a timely argument for proponents and opponents of the treaty to ban atomic weapons.

Beatrice Fihn, executive director of the International Campaign to Abolish Nuclear Weapons, said 15,000 nuclear weapons around the world have not managed to deter Pyongyang’s nuclear ambitions and a new approach is needed starting with prohibition as the first step to eliminate nuclear arms.