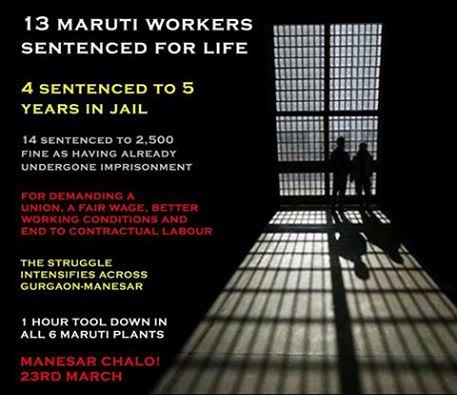 13 of our brothers have been given ‘life sentences’ – including 12 Maruti Suzuki Workers Union body members – on the baseless charge of ‘murder’ on 18 March afternoon by the Gurgaon Additional Sessions Court. 4 workers given 5 year sentences. 14 workers given 3 years, but have already spent 4 years in prison, so released. Of the earlier acquitted 117 workers who spent over 4 years in Jail, we do not yet know as to who will return the lost years. 148 already spent 4 years in Jail without bail since 2012 without bail and 2500 workers were earlier illegally terminated and then faced continual State repression.

We reject the falsehood that this is an ‘objective judgement’. The Prosecution Case and Judicial Sentence is based on no evidences, false-witnesses and pure class hatred. See here for details of the arguments. Workers had no involvement in the unfortunate death of the pro-worker manager who helped in registering the Union, Mr Avanish Kumar Dev – this is conclusively proved in the legal case from the Defence. The conflict on the day of 18 July 2012 started with a supervisor attacking a Dalit worker Jiyalal – who was later made into ‘prime accused’ in the case – with caste-based abuse, and the worker’s suspension. The entire case is part of management conspiracy to finish off the Union, an attack on the Right to Union Formation itself, and the demands–particularly of abolition of Contract Worker System–it was raising and symbol it became for workers struggle.

The nature of the legal case was informed from the outset by the vitriolic repressive manner in which thousands of workers were continually hounded after 18 July 2012 by the nexus of the management and government, including the Police, administration and labour departments. This Judgement – made in between turning Gurgaon and Manesar into Police camps – is directly anti-worker and heavily influenced by the interests of the Company management, to ‘set an example’, to sow fear and terror among all industrial workers in the country, particularly the belt of Gurgaon to Neemrana in Haryana and Rajasthan. The Prosecution in its final arguments – much similar to the Chandigarh HC order of May 2013 rejecting bail for workers – arguing for ‘death penalty’ for workers, talked of the need of restoring ‘confidence’ of capital, and the Prime Minister’s initiative of inviting global investors for ‘Make in India’. The confidence of these foreign and national capitalists depend on one thing: a cheap and compliant labour force, so no Unions or any raising of demands.

By specifically targeting the entire Union body, this Company Raj wants to tell us that the workers movement, the Right to Union Formation and other Trade Union rights as well as Human Rights of workers in the country will be simply (with illegal and legal means) crushed by capitalists and the State. The attack on our Union body members is been simply because they have been the leadership of the struggle against the management practices of exploitation of labour in the factory and waged a legitimate long struggle for trade union rights and dignity since 2011 with the unity of permanent and contract workers, demanding the abolition of the contract worker system, dignity in the workplace, and an end to exploitative practices by the management. And finally registered our Union on 1 March 2012. This workers assertion was not acceptable to the management and they wanted to crush our Union, especially after submission of the Charter of Demands in April 2012 which argued for abolition of contract worker system. So they conspired and escalated the conflict on 18 July 2012.

The struggle full of vitality and hope gave positive energies for other workers to fight similar exploitation in the industrial region and beyond from Honda to Rico to Asti to Shriram Pistons to Daikin AC to Bellsonica name a few. This collective workers assertion needed to be crushed and ‘taught a lesson’ in the interests of the company managements. Similar conflicts and cases of repression on workers movements have happened from Graziano Transmissions Noida, Regent Ceramics Puducherry, Pricol in Chennai and so on. This Judgement comes in the trail of these repression, increasing its tempo. And so, the industrial areas are being turned into Police Camps.

Maruti Suzuki CEO RC Bhargava has said this is a ‘class war’. And what the government is doing is to turn workers disputes with management into a ‘Law & Order problem’, to criminalize workers fighting for their Rights of Union formation and against the Contract System. We condemn this criminalization of workers.

We are not afraid, nor tired with so much continuous repression. IT is only by increasing the tempo of the unity of workers beyond the divisions of permanent and contract, and independent class assertion against the continuous attacks of the current Company-State regime of exploitation-repression, that we can take the struggle forward. Lakhs of workers in industrial areas are already doing solidarity actions since 9 March, and on 16 March, over a lakh workers in Haryana, Rajasthan, UP, Tamil Nadu did hunger strikes. On 18thimmediately after the Judgement, 30000 workers in 5 Maruti Suzuki factories did an hour of ‘tool down’ solidarity strike even though the management tried to crush it as always by pressure to work and notice of 8 days pay cut. Since 16th March, there have been protests by various workers, students, human rights and other democratic organizations in over 20 cities, and deputations and solidarity positions and actions in 21 countries.

On 23rd March – the day of martyrdom of Shaheed Bhagat Singh – the Maruti Suzuki Mazdoor Sangh (MSMS), the joint platform of all 6 Maruti Suzuki factories have given the call of ‘Chalo Manesar’, for thousands of workers to gather and do a Protest rally in Manesar. We call upon all pro-worker forces to participate in this Protest. We also feel the need for a National Day of Protest, tentatively on 4th April. In this decisive and crucial hour, we appeal to all workers and pro-worker forces to stand with the demand to free the convicted workers, and wage a protracted struggle to ensure justice and workers rights, and show solidarity in whatever ways possible.

End the Regime of Exploitation-Repression in the Industrial belts.