165 years ago, first female Dalit writer wrote about the ‘grief of the Mangs and the Mahars’ 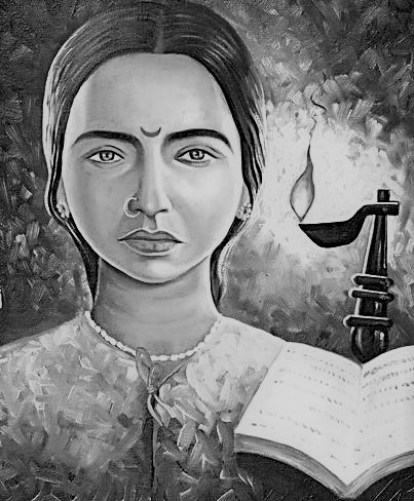 Here is a historical piece of writing by India’s first female Dalit writer Mukta Salve. At the time of writing this essay, she was merely 14 years old and a student at the school run by Jotirao and Savitribai PhuleBY MUKTA SALVE मुक्ता सालवे ON FEBRUARY 15, 2020

(Jotirao Phule, Ambedkar and others have written plainly about the plight of India’s Shudras-Atishudras – how much they have suffered due to the brahmanical system; how they have been forced to live like animals. But Mukta Salve gives us the perspective of a 14-year-old Dalit girl on this oppression. This first female Dalit writer vented her anger 165 years ago, in an essay she wrote for the Marathi fortnightly Gyanodaya. It was published in two parts under the title ‘Mang Maharachya Dukhvisayi’. The first part was published on 15 February 1855 and the second part on 1 March 1855. On this special occasion, we republish below the English translation of essay by Braj Ranjan Mani. )

ABOUT THE GRIEF OF THE MANGS AND THE MAHARS

It humbles me to realize that God has filled the heart of an untouchable girl like me, considered to be even lower than an animal, with the pain and suffering of my people – the Mahars and Mangs. The Creator of all beings has put this in my heart and while invoking His name, I dare to pen this essay with the strength I have now received. The Creator is the one who created the Mangs, the Mahars and also the Brahmans and He is the one, who is filling me with wisdom to write. He will bless my labour with a fruitful outcome.

If we attempt to refute, on the basis of the Vedas, the argument of these gluttonous Brahmans, who hate us and consider themselves vastly superior, they say that the Vedas are their own domain, their exclusive property. Now apparently, if the Vedas are only for the Brahmans, they are obviously not for us. If the Vedas belong only to the Brahmans, then it is an open secret that we do not have the Book. We are without the Book – we are without any religion. If the Vedas are for the Brahmans only, then we are not bound to act according to the Vedas. If merely looking at the Vedas can get us into grievous sins (as the Brahmans claim), then would not following them be the height of foolishness? Muslims lead their life according to their Koran, English people follow their Bible and Brahmans have their own Vedas. Because they all have their own good or bad religion that they follow, they are somewhat happier than us who are without any religion. Oh, God, please tell us, what is our religion? Teach us, O God, your true religion so that we all can lead our lives according to it. Let that religion, where only one person is privileged and the rest deprived, vanish from the earth and let it never enter our minds to boast of such a [discriminatory] religion.

These people drove us, the poor Mangs, and Mahars, away from our own lands, which they occupied to build large buildings. And that was not all. They would make the Mangs and Mahars drink oil mixed with red lead and bury our people in the foundations of their buildings, thus wiping out generation after generation of our poor people. The Brahmans have degraded us so low; they consider people like us even lower than cows and buffaloes. Did they not consider us even lower than donkeys during the rule of Bajirao Peshwa? You beat a lame donkey, and his master retaliates. But who was there to object to the routine thrashing of Mahars and Mangs? Under Bajirao’s rule, if any Mang or Mahar happened to pass in front of a gymnasium, they would cut off his head and play “bat and ball” with their swords as bats and his head as a ball, on the grounds. When we were punished for even passing by their doors, where was the question of getting education, getting freedom to learn? When any Mang or Mahar would learn somehow to read and write, and if Bajirao came to know about this, he would say: education of a Mang or Mahar amounts to taking away a Brahman’s job. He used to say, “How dare they get educated? Do these Untouchables expect the Brahmans to hand over their official duties to them and move around with their shaving kits, shaving the heads of widows?” With such remarks he would punish them.

Secondly, were these Brahmans satisfied with prohibiting us from learning? Not at all. Bajirao went to Kashi and died an ignominious death there. But the mahars here, no less untouchable than the Mangs, also avoid the company of the Mangs. They have acquired some brahmanical traits, and consider themselves to be superior to the Mangs – they also get polluted by the shadow of Mangs! Do the stony-hearted Brahmans, who proudly roam around in their so-called holy clothes to proclaim their superiority, ever feel even a frisson of compassion for us when we suffer so much on account of being labelled Untouchables? Nobody gives us employment because we are Untouchables. No job means no money. We have to endure grinding poverty. O learned pandits, fold up your selfish priestcraft and stop the prattle of your hollow wisdom and listen to what I have to say. When our women give birth to babies, they do not have even a roof over their heads. How they suffer in the rain and the cold! Please try to understand it from your own experience. If they get some disease while giving birth, where will they get money for the doctor or medicines? Was there ever any doctor among you who was human enough to treat such people free of cost?

The Mang and Mahar children never dare lodge a complaint even if the Brahman children throw stones at them and injure them seriously. They suffer silently because they know they have to go to the Brahmans’ houses to beg for the leftover food. Alas! O God! What agony this! I will burst into tears if I write more about this injustice. Because of such oppression, the merciful God has bestowed on us, this benevolent British government. Let us see how our pain has been mitigated under this government.

Earlier, Gokhale, Apate, Trimkaji, Andhala, Pansara, Kale, Behre, etc [all Brahman surnames], who showed their bravery by killing rats in their homes, persecuted us, not sparing even pregnant women, without any rhyme or reason. This has stopped now. Harassment and torture of Mahars and Mangs, common during the rule of Peshwas in Pune, have stopped. Now, human sacrifice for the foundation of forts and mansions has stopped – now, nobody buries us alive. Now, our population is growing in numbers. Earlier, if any Mahar or Mang wore fine clothes, they would say that only Brahmans should wear such clothes. Seen in fine clothes, we were earlier accused of stealing such clothes. Their religion was in danger of being polluted when Untouchables put clothes around their bodies; they would tie them to a tree and punish them. But, under British rule, anybody with money can buy and wear clothes. Earlier, punishment for any wrongdoing against the upper castes was to behead the guilty Untouchable— now, it has stopped. Excessive and exploitative tax has stopped. The practice of untouchability has stopped in some places. Killing has stopped on the playground. Now, we can even visit the marketplace.

Under the impartial British rule, many such things have happened. As I write this, I am amazed that the Brahmans who earlier used to treat us like dirt, as I have written above, want to free us from our suffering. Not all the Brahmans though. Those who are influenced by Satan continue to hate us like before. They target and outcaste the Brahmans who are trying to liberate us. Some noble souls have started schools for Mahars and Mangs, and such schools are supported by the merciful British government. O, the Mahars and Mangs, you are poor and sick. Only the medicine of knowledge will cure and heal you. It will take you away from wild beliefs and superstitions. You will become righteous and moral. It will stop your exploitation. People who treat you like animals, will not dare to treat you like that any more. So please work hard and study. Get educated and become good human beings. But I cannot even prove this. For example, those who have received good education also sometimes surprise us by doing very bad deeds!