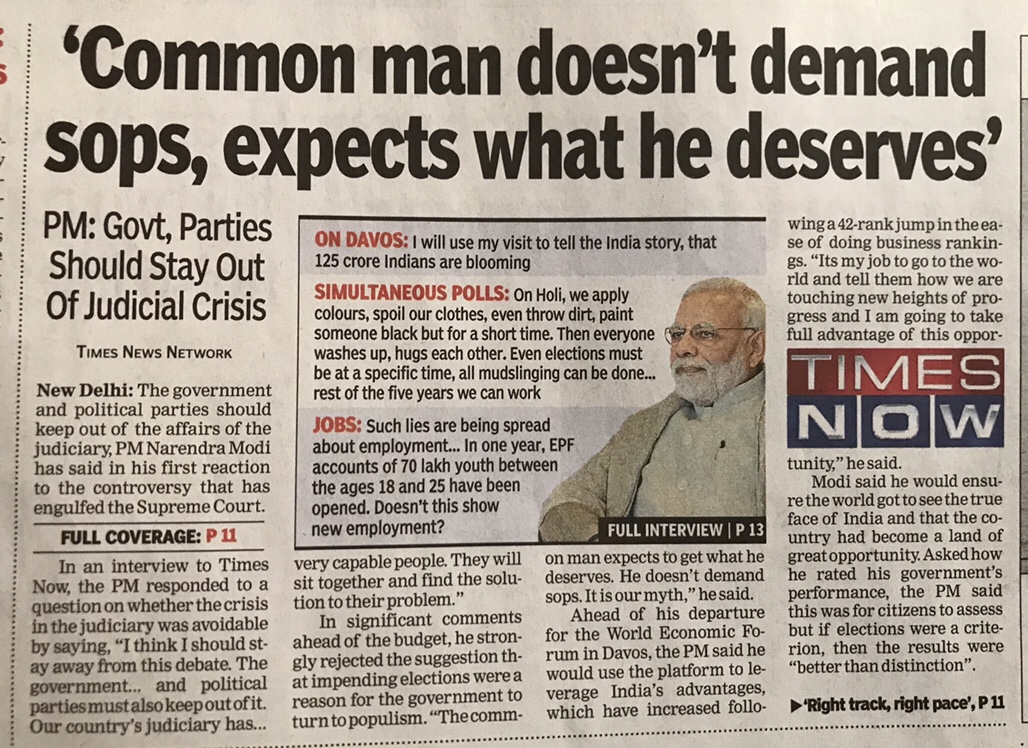 Partial and continuing proof of it comes in the form of Prime Minister Narendra Modi’s “interviews” with Sudhir Chaudhury of Zee, and Rahul Shivshankar and Navika Kumar of Times Now.

Hacks and flacks from Government-run Doordarshan and Press Information Bureau should be blushing at the mild and innocuous questioning given the state of the country, the economy, and the institutions.

Which should surprise nobody given the state of “independent” media and the BJP’s attitude towards its independence.

Here are 21 questions Modi’s interrogators glossed over in the excitement of meeting the Pradhan Sevak in flesh and blood.

Obviously, given the terms and conditions that are imposed before modern-day interviews, it is impossible for such questions to be asked, but it is useful to remember the gap between hype and reality.

1.Pradhan Sevak ji, is ‘Achhe Din’ already here, as you promised, or has it been postponed to 2022? Is Rs 15 lakh going to be transferred by NEFT or RTGS?

2.In the recent elections in your home state, Dalits, Muslims, Kshatriyas, tribals, students, farmers, jewellers, businessmen, traders were all against you. Your party narrowly won but does this state of affairs really suggest you are doing a great job?

3.Why has the “independent” CBI not filed an appeal over the sudden discharge of BJP president Amit Shah, less than a month after the mysterious ‘death’ of judge Brijmohan Loya in 2016?

4.Key police officers who were in Gujarat in 2002 or those who provided a clean chit to you have all been reinstated or rewarded by your government. What makes you think that the people of India do not notice these acts of patronage and come to their conclusions?

5.Would you agree that despite all its faults, UPA presided over a more peaceful, harmonious, socially cohesive and more inclusive India?

6.India has survived as a democracy because of its institutions. Why does your government consistently disgrace the “temple of our democracy” by sneaking in key legislation as money bills, without proper debate and discussion?

7.Despite falling short of a majority in Goa and Manipur, BJP has formed governments by “buying up MLAs” in these states. Are you proud of these tactics? Or is everything OK in the quest for a Congress-mukt Bharat?

8.How do you sleep soundly at night when you could have done more when Mohammed Akhlaq was murdered, when Pahlu Khan was lynched, when Najeeb went missing?

9.Why is your government hellbent on killing institutions of excellence like JNU and the IITs?

10.Where did you pick up this gem about Lord Ganesha being a product of plastic surgery? And where do your colleagues learn about Charles Darwin and the origin of species?

11.Have you ever asked your esteemed colleagues M.J. Akbar, Mukhtar Abbas Naqvi and Shahnawaz Hussain for their expert, first-hand views on “love jihad”?

12.Is it fair to say you have allowed yourself to be turned into a 31% prime minister, a “prime minister of a party” rather than that of every section of the country, especially the poor, marginalised and disenfranchised?

13.Every known index—growth, jobs, agriculture, manufacturing, exports, etc—under you is way down compared to Manmohan Singh. Were the people of India fooled by the Gujarat Model? Or did they overestimate your abilities?

14.On what basis do you claim that you run a taint-free government when the Rafale deal involving Anil Ambani, the abnormal rise of the Adanis, the parcelling of state land for Baba Ramdev’s Patanjali, etc, point to a new and obvious kind of crony capitalism

15. You were vehemently opposed to Aadhaar before the 2014 election Why did you change your mind after becoming PM? Will Nandan Nilekani stand for the 2019 elections as a BJP candidate?

16.RBI has put an official seal on the disaster that was demonetisation. Why have you not said sorry to the millions whose lives were wrecked and ruined by your ill-advised decision?

17.Has your party come to power “only to change the Constitution”, as claimed by your ministerial colleague Anantkumar Hegde? If so, is “New India” a euphemism for a ‘Hindu Rashtra’?

18.How has a “Hindu nationalist party” like BJP managed to make enemies of all its neighbours, including the last Hindu kingdom on earth, Nepal?

19.Why are you afraid of addressing a formal, open press conference even after 44 months in power? Why do you choose a one-way medium like Twitter or ‘Mann ki Baat’?

20.What do you do after work? What are the 44 books have you read in the last 44 months? What movies, plays have you watched? What music do you listen to? Do you have a life, or do you just watch reruns of ‘Tarak Mehta ka ulta chashma’?

21.Do you think the RSS is already preparing the ground for Yogi Adityanath as the next PM if BJP is reelected in 2019?

URGENT APPEAL: A Palestinian Detainee on 52nd day of hunger strike denied examination by an indepen...
Bhima Koregaon case -Uddhav Thackery should follow the footsteps of Hemant Soren
Can the World Come to Its Senses on Nuclear Weapons?
Indian Govt to ensure security of NE students: Chidambaram