3 yrs after : Radioactive waste piles up in Tokyo area 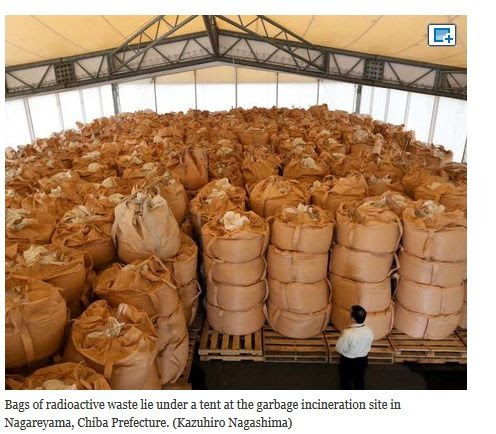 Kikuji Enomoto wanted to live his retirement in peace while helping to beautify his neighborhood, but he is now stuck residing near more than 500 tons of radioactive waste.

The waste, consisting of incinerator ash, is being stored at the Teganuma disposal site, about 800 meters from Enomoto’s home in Abiko, Chiba Prefecture. It is part of the thousands of tons of radioactive waste that remain in temporary storage in the Tokyo area nearly three years after the triple meltdown at the Fukushima No. 1 nuclear power plant.

Enomoto, 73, has run out of patience waiting for the prefecture to decide on a final disposal site for the waste.

He heads a group of 32 residents who filed a lawsuit in January against the Chiba prefectural government, demanding that the radioactive waste temporarily stored in their neighborhood be removed immediately.

“A major problem would arise if the incinerator ash leaked out due to the effects of a natural disaster and contaminated the surrounding rice fields,” Enomoto said.

The temporarily stored waste contains more than 8,000 becquerels of radioactive cesium per kilogram and has been designated for special processing.

At the end of last year, 12 prefectures were storing a total of 140,843 tons of the waste. The basic rule is to have each prefectural government find a final disposal site for radioactive waste produced within its jurisdiction through garbage incineration or sewage treatment.

The central government plans to build final disposal sites in five prefectures–including Chiba–that have a dearth of storage sites, but no significant progress has been made. The other seven prefectures have still not decided how to handle radioactive waste within their boundaries.

Chiba Prefecture designated 3,612 tons of radioactive waste, mainly from the northwestern part of the prefecture, where many hot spots with high radiation levels were detected following the 2011 Fukushima nuclear accident.

The three cities of Kashiwa, Matsudo and Nagareyama incinerated a large part of that waste, producing 2,564 tons of ash that could not be sufficiently stored. The prefectural government allowed 526 tons of the ash to be brought to the Teganuma site at the end of 2012.

Incineration does not destroy radioactive substances, so the ash still falls under the designation for special disposal.

The central government plans to construct a final disposal site in Chiba Prefecture by the end of March 2015, the deadline set under an agreement between the prefectural government and the three municipal governments to end temporary storage at Teganuma.

However, the selection process has not gone smoothly, and the residents filed the lawsuit because they feared the temporary storage site would become the permanent one.

Enomoto, who has won an award from the Abiko government for his efforts to beautify the city, said the central government must become more involved.

“Unless a final disposal site operated by the central government is constructed, there would be no place to keep the incinerator ash,” he said. “I want them to take back this waste as soon as possible.”

Kashiwa Mayor Hiroyasu Akiyama stressed the urgency of the situation.

“If a location for the final disposal site is not chosen by around September, we will have to begin considering a temporary storage site for the waste that will be returned,” Akiyama said.

The Tokyo metropolitan government has designated about 982 tons as radioactive waste. All but one ton is now being temporarily stored at a land reclamation site.

“We were lucky to have a disposal site surrounded by the ocean,” an official in charge said. “There has been no strong opposition from residents. We want to now wait for the central government to take care of the matter.”

Saitama is the only prefecture in the greater Tokyo area that has not designated any radioactive waste. But that does not mean there is no such waste in the prefecture just north of the capital.

In fact, the prefecture is temporarily storing 245 tons of incinerator ash with radiation levels that would qualify it as radioactive waste at its sewage processing facility in Toda.

Saitama Prefecture has not applied for the designation to avoid being obliged to process the waste within the prefecture.

“If we received the designation, we would have to ask a municipality to bear the burden of being chosen for the final disposal site,” a prefectural government official said.

An official with the prefectural government section in charge of sewage management said if radiation levels of the waste decreased to a certain level, it could be turned over to a company handling industrial waste for transport outside of Saitama.