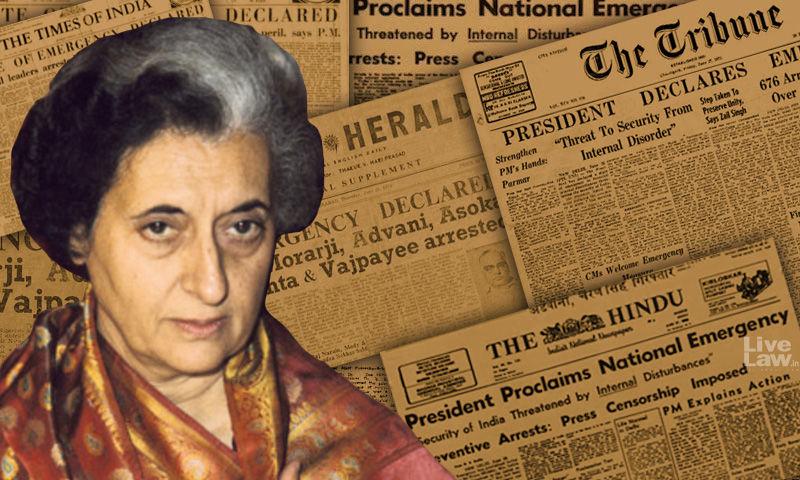 Every democratic experiment has its dark spots, detours and about-turns. India, the “biggest democracy in the world”, is no exception. The bold experiment it began more than seventy years ago was unique for the sheer number of poor and underprivileged it affected and the entrenched social divides they inherited.

In the Internal Emergency declared on 25 June 1975—within a few short decades of this experiment—thousands of oppositional figures were detained, democratic rights were suspended and the press faced a clampdown. It could be called the first dark spot on free India. The Prime Minister Indira Gandhi regime wanted to save itself from the crisis brought on by decisions of the Supreme Court that were not in its favour, amid growing mass discontent over its policies.

This dark chapter completed 46 years this month, but few are ready to accept that its shadows have refused to get washed away. Events of the time have, instead, become arsenal for the majoritarian Hindutva forces that wish to convert the sovereign, independent, secular, socialist republic into a Hindu Rashtra.

Would it then suffice to restrict our attention to the prime movers of the Emergency phase, their supposed hunger for power and their alleged psychological insecurities? Perhaps not. The Emergency is when power began to be centralised in the hands of the chief executive of the country and when institutional procedures were violated and a close coterie of advisers ruled the roost. It became a template for future authoritarian incursions into the democratic project.

Surprisingly, anniversaries come and go but some aspects of this period never receive the attention they deserve. For example, the Janata Party won only a handful of seats in the southern provinces in the post-Emergency election. It is in these states that the Congress party won a majority of its 153 seats in that election. Two, the Janata experiment fizzled out within three years too, and Indira Gandhi returned to power with a majority. Three, after three decades of post-Independence democracy, there was a blatant assault on democracy, but it did not face mass resistance.

Elections took place, education and employment spread, and multiple nation-building projects were taken up after Independence, and still, the Emergency was imposed. Does it mean democracy and its consciousness were merely formal in India, and there was a long way to go before it could become substantial and vigorous? It is possible that since a motley non-Congress combination took over 21 months later, it numbed the populace to their apathy during the Emergency months?

We fail to note that the same infirmities of democracy remain unresolved and unaddressed then and now. For example, the fact that the Hindutva Right exposed its cowardice when its activists were put behind bars is also not discussed or challenged today.

Tapan Basu, Pradip Datta, Sumit Sarkar and other writers, in their 1993 collection, Khaki Shorts and Saffron Flags: A Critique of the Hindu Right, explain how top RSS leaders reacted during the Emergency. The monograph notes, “RSS attitudes under the Emergency revealed a curious duality, reminiscent of the 1948-49 days.” While the RSS was banned and Sangh supremo Balasahab Deoras was put behind bars, he, like Golwalkar in 1948-49, “…quickly opened channels of communication with the Emergency regime, writing fairly ingratiating letters to Indira Gandhi in August and November 1975 that promised cooperation for lifting a ban (on RSS). He tried to persuade Vinoba Bhave to mediate between the RSS and the government and sought also the good offices of Sanjay Gandhi.”

Bapurao Moghe, in an article in the 24 July 1977 edition of the Sangh mouthpiece, Panchajanya, acknowledged that such letters had been written by the Sangh supremo. Lawyer and political commentator AG Noorani in his 2000 book, The RSS and the BJP, also tells us that these letters were “placed on the table of the Maharashtra Assembly on 18 October 1977”. He adds, “He wrote to the prime minister, first, on August 22, congratulating her on her speech on Independence day” and begged her to lift the ban on the RSS. He next congratulated her “as five judges of the Supreme Court have upheld the validity of your election.”

Though Indira Gandhi had won the case, it was not based on merit but a constitutional amendment with retrospective effect. In these letters, Deoras underlined that the RSS “has no connection with the movements” in Bihar and Gujarat. He ends by offering the services of “lakhs of RSS volunteers….for the national upliftment.” So, Deoras was concerned with the RSS alone in these letters, and to save his organisation from an autocratic regime, he was ready to declare that if the ban is lifted his men would be at its service. He does not ask for the release of all detenues nor to lift the Emergency, as Noorani has noted. It seems the only problem the RSS supremo had was that his organisation was banned.

When Indira Gandhi refused to budge, the Sangh supremo shot off another letter dated 16 July 1976, in which he congratulated her for her “efforts to improve relations with Pakistan and China” and declared that she has been given some wrong information about his organisation.

Whether or not Deoras and Indira Gandhi reached an agreement, one thing is clear: RSS workers were instructed from the top to give an undertaking for their release from jail. The undertaking went like this: “[Detenue so-and-so] agrees on affidavit that in case of my release I shall not do anything detrimental to internal security and public peace…I shall not do anything prejudicial to the present Emergency.” This is recorded in Sanghachi Dhongbaji, written in 1977 by socialist activist Baba Adhav. According to Adhav, Deoras acknowledged at a press conference in Delhi that he wrote twice to Indira Gandhi. Madhu Limaye, a towering figure of the socialist movement, spent 19 months in three jails that were in RSS areas and also said he knew of the RSS detainees’ letters.

Understandably, the Hindutva brigade would like to forget this past episode, when instead of demonstrating uncompromising defiance its members cringed. Still, the organisation had no qualms projecting itself as a fighter against this dark period. The “dark chapter” therefore proved a bonanza for the Hindutva Right, as it not only hid its “curious duality” of opening channels of communication with Indira Gandhi later while also projecting itself as a leader of the “second freedom struggle”.

It also helped the Sangh Parivar gain the legitimacy it sorely lacked because of its behaviour during the anti-colonial struggle and the role of its ideology in the assassination of Mahatma Gandhi. At the time of Emergency, people had not forgotten that the Hindutva Right had stayed aloof from the anti-colonial struggle. Nor that they did not have any qualms in sharing power with the Muslim League during the Quit India Movement, when the Congress had resigned from state Assemblies.

Quite like the infirmities of democracy that can facilitate an authoritarian turn, this curious behaviour of the Hindutva Right has not got the attention it deserves.

The author is a freelance journalist. The views are personal.