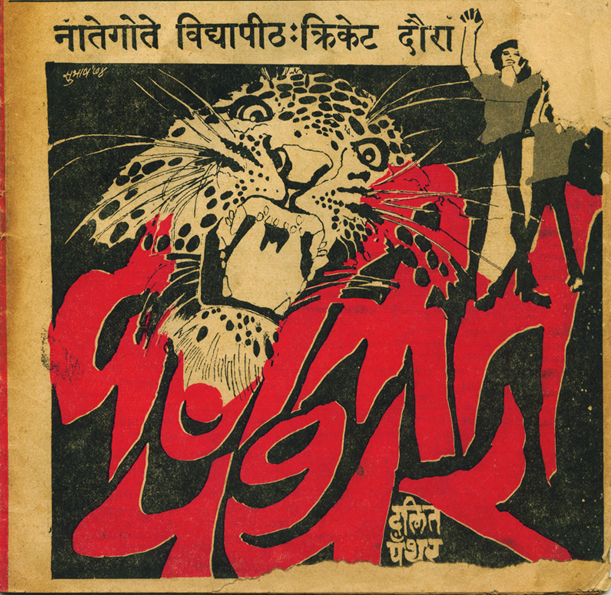 Dalit Panther poster in conjunction with a cricket match on the cover of Manohar magazine, February 17, 1974.

Dalit Panther was a spontaneous and aggressive reaction to the atrocities against dalits in Maharashtra. It changed the political landscape of the state and had an undeniable impact on the dalit politics of India.Amey Tirodkar 09 Jan 2022

“We were angry. The atrocities against Dalits were committed acrossMaharashtra. We were young, well-read and ready to take to the streets. We had read about the Black Panther movement from the US. It was a movement of young rebellious intellectuals. We could relate to them and that’s how Dalit Panther started,” says JV Pawar, one of the three founders of India’s first aggressive Dalit youth organisation, Dalit Panther. The year 2022 marks the 50th year since its inception.

The year this all started was 1972. Not all years have the fortune to be remembered by thousands of people. But 1972 was different. Indian independence was 25 years old and the youth and students’ movements had taken to streets across the globe. Mumbai’s youths too, especially from the Dalit community, were reading about the conflicts and protests worldwide.

The conflicts taking place in India were not much different. India was freed from the British but not from the atrocities, ill treatment of a large part of its population. Dalits and tribals were facing the worst kinds of attacks from upper castes. There was atrocious case of Dhakali, Akola where eyes of two Dalit brothers were ripped out by upper caste people from the village. A dalit woman was paraded nude in Parbhani’s Bramhangaon village around the same time. Dalits were socially boycotted by the entire village of Bavda in Pune. All these cases were provoking the young, newly literate Dalit youths of Mumbai and Pune.

And who were these youths? Their most famous and celebrated leader was Namdev Dhasal, a rebel Marathi poet. His poems such as Golpitha had garnered attention from across India. His style was magnetic and provocative. Namdev, who was a dalit himself, drove taxi on the roads of Mumbai. Raja Dhale was also part of the founding trio. He was a young author, intellectual and known to be articulate. His article on the eve of 25th anniversary of Indian independence  published in the Marathi weekly Sadhana stirred the conscience of many in the state. He asked what is the use of this ‘freedom’ for him or lakhs like him? “What is to be done with this tricolor?” he questioned in his article pointing to the lack of improvement in the lives of dalits despite 25 years of independence. This article led to quite an uproar and started a completely new debate in Maharashtra.

After Dr Ambedkar changed his religion to embrace Buddhism in 1956, the generation that followed him was one of the first literate generations among dalits. Namdev, Raja, and Pawar represented this generation. “The dearth of dalit and tribal seats in government jobs and conspicuous rejection of new learned dalit youths from various posts were clearly visible. The youths, especially from the cities like Mumbai and Pune, were disturbed and wanted to stand against this discrimination. Dalit panther was their way of taking on the mighty system,” says JV Pawar in one of his books.

Dalit Panther came up with a manifesto after its foundation. “We do not need space in the Bramhan area. We want power from all India. We are not just looking at human beings as individuals. We are here to change the system. We believe that atrocities against us won’t stop by changing the hearts of the oppressors. We will have to rise against them,” said this manifesto. This also took a clear stand against the capitalist powers; it stated that justice and equality will come only after defeating capitalist powers.

The impact of Dalit Panther on national political as well as social landscape is immense. Very few know that the Bahujan Samaj Party founder Kashiram – someone who took dalit politics to new heights in North India – was inspired by Dalit Panther. Once Namdev Dhasal wrote in his column in the daily Saamana, “Kashiram used to meet us in Pune. That time, he used to come riding a cycle. We had long discussions on differences in caste politics of Maharashtra and North India.” (His column ‘Sarva Kahi Samasthisathi [Everything for my people] is available in Marathi.)

By 1977, differences in Dalit Panther emerged and manifested on various levels. That year, Ramdas Athavale – who is now the minister of state for social justice of India – along with Professor Arun Kambale, SM Pradhan, Preeramkumar Shegaonkar, and others started ‘Bharatiya Dalit Panther’. The differences on the issue of core ideology also hit the organisation. Dhale and his supporters believed and reportedly accused Namdev Dhasal of being pro-communist. Later on, dalit politics in Maharashtra got fragmented into multiple parties, organisations and groups. By 1996, Namdev Dhamal even joined hands with Shiv Sena. And almost 15 years later, in 2011, Ramdas Athavale had a deal with Shiv Sena and BJP for municipal elections in Mumbai. Now Athavale is with the BJP, the political front of Rashtriya Swayamsevak Sangh – against which Athavale spoke passionately back in late 1970s.

But these developments do not undermine the importance and contribution of Dalit Panther to Maharashtra’s and Indian social and political landscape. “Panther was against discrimination, injustice, atrocities and fascism. Today’s situation is no different. The spirit of Panthers can can be seen in various dalit organisations across India. The poems of Namdev are an inspiration even for today’s youth. That’s why Panther is still relevant in its 50s,” said Subodh More, political activist and convenor of golden jubilee committee of Dalit Panther.

The political analyst believes that Dalit Panther created a space in socio-cultural-political arena and no one can deny that. “It (Dalit Panther) was mainly a political movement. But their leaders were well aware of their cultural duties. Through poems and novels and later on through plays, street plays and other art forms, Dalit Panther challenged then the so-called mainstream cultural politics and created an undeniable parallel movement. This movement gave space to dalits and workers. It is the most remarkable achievement of Dalit Panther,” said senior journalist Vijay Chormare.

For today’s Maharashtrian youths, especially dalit youths, Panther is an iconic movement. The celebration of the 50th year of Panther is being organised and is planned by youths. Bhagyesha Kurane, a granddaughter of Raja Dhale, believes that to visit the days of Panther through these programmes will re-energise today’s youths. “Dalit Panther re-energized the youth after Ambedkar. Today, when fascism is on a rise, youths across India can revisit the history of Dalit Panther to know how to build an organisation, how to fight for one’s own rights, how to create political as well as cultural impact on society. I think the celebration of Dalit Panther in its 50th year can be an opportunity to mobilise youths and get them ready in fight against fascism,” said Bhagyesha.

Imagine a world with no religion, no partition and no 9/11
Why Greenpeace is first on the chopping block ?
Malegaon blasts case: Implications of SC conclusions in Lt Col Purohit's bail judgment
#India - New state of poverty #Telengana