8 June: International Day of the Oceans

The theme of World Oceans Day 2020 is ‘Innovation for a Sustainable Ocean’. The oceans are facing unprecedented pressures from factors ranging from pollution to climate change

Oceans cover 71 per cent of the Earth’s surface, and they hold 97 per cent of our planet’s water. World Oceans Day, celebrated across the world on June 8, is an annual event designed to encourage people to celebrate the oceans and take steps to protect ocean health.
With the ongoing issues related to water bodies, such as plastic waste, decreasing level of water, impurities in water and others, it is the utmost necessity to preserve and conserve our oceans. They are the lungs of our planet and provide most of the oxygen we breathe. Being a major source of food and medicines, oceans are needed to be preserved for their beauty and wealth.

World Oceans Day 2020 theme
The theme of World Oceans Day 2020 is “Innovation for a Sustainable Ocean”. The oceans are facing unprecedented pressures from factors ranging from pollution to climate change. And these pressures are projected to only rise in the future. The need to balance the preservation of a healthy ocean and ever-increasing economic activities requires a fresh approach and rethinking in many areas. 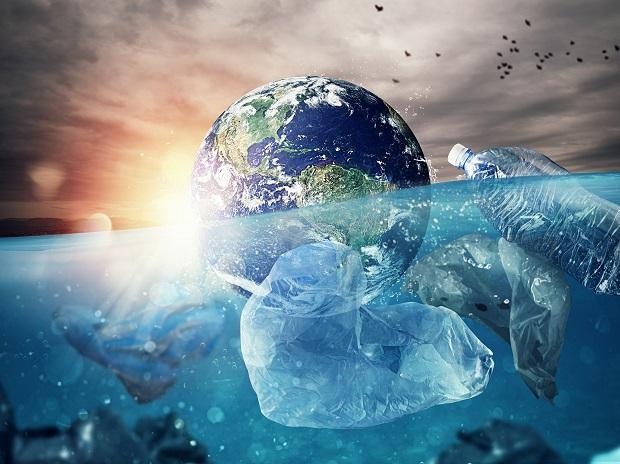 Representative photo by Shutterstock: The Earth floats in the sea full of plastic

Need for Sustainable Oceans
More than half the people on Earth live within 193 kilometres of the ocean, but even those who live nowhere near the sea are dependent on the massive saltwater ecosystem that covers nearly three-fourths of our planet. Scientists warn that the sea is changing rapidly and that our many uses of its bounty must be managed far more sustainably.
About World Oceans Day
Canada first proposed the concept for World Oceans Day in 1992 at the Earth Summit in Rio de Janeiro. Then, in 2004, the Ocean Project and World Ocean Network launched a four-year petition to the United Nations to officially recognise 8 June as World Oceans Day. Fours years later, in December 2008, a United Nations resolution designated the day for the oceans.
Importance of Oceans
Oceans cover 71 per cent of the Earth’s surface and hold 97 per cent of the planet’s water. They help feed the world and provide most of the oxygen.
Oceans also play a key role in regulating the weather and climate. Water evaporating from the oceans falls inland as rain, which we then use as drinking water and for growing crops. A variety of life-saving medicinal compounds, including anti-inflammatory and anti-cancer drugs have been discovered in the oceans. The oceans also provide us with abundant opportunities for recreation and inspiration. The ocean is vital to the world’s economy, with more than 90% of trade using sea routes and as a source of jobs for millions of people. The ocean is also the stage for a growing range of new ocean-related economic activities and constant innovations. The sea’s biodiversity is astounding. Scientists have identified some 200,000 marine species but suspect that millions more actually call the oceans home. Ocean biodiversity is astounding. Photo: Shutterstock
Threat to Oceans
Threats to oceans include pollution, overfishing, invasive species, and rising ocean acidity due to the extensive use of fossil fuels. And we’ve all heard of the threat to the ocean from plastic waste. The problems are daunting, and this day is marked to remind global citizens that we should do our part in protecting our oceans with all that it and the rest of nature have given us.

Nevertheless there are maritime delimitation disputes that are currently dangerous and require good-faith negotiations to prevent increased tensions.  World Citizens have played an important role in the Law of the Sea Conference (UNCLOS) negotiations and in the creation of the International Seabed Authority and its Tribunal on maritime deliberation issues.(1)

There are currently two major geographic areas in which there are maritime delimitation issues: the Arctic and the China Seas. The China Seas tensions are the most politically sensitive.  Territorial sea disputes can be heated up by governments and cooled off at will when other political issues require attention elsewhere.  Currently, we are in a “heating up” stage between China and Japan, and to a lesser degree between China and Vietnam, China and Taiwan, and China and the Philippines. The China-U.S.A. tensions also color the South China Sea issues.

There are both economic and geo-strategic aspects to these tensions, and both need to be addressed if good faith negotiations are to lead to cooperation for the benefit of all.(2)

Progress in maritime geology and predictions of metal shortages in the decade ahead have made seabed mining a concern of governments such as China, Japan and South Korea.  Minerals such as copper, gold and many other industrial minerals as well as oil-natural gas are thought to be available through sea mining in this Pacific area.

The strategic-geo-political aspects are less clear but they focus on the Chinese Navy creating permanent islands around what had been only rock formations of land that was visible only part of the year.  There is a drive for influence in the area among China, Japan, the USA, and to a lesser extent, India.  The drive has no doubt to do with the vision each State has of its leadership role, its growing or declining position, its ability to limit the influence and access of other States, and its “core interests.”  Such political speculations are “immaterial” but can easily lead to mistaken calculations and consequent actions.

Factions in both Japan and China are playing a “nationalist card” concerning the maritime delimitations disputes, no doubt for reasons which go beyond the specific aspects of the disputes. Although the Chinese “nationalist” focus is directed toward Japan, there is a vision among some Chinese that the USA is the cause of the continuing problems with Taiwan and Japan.

Therefore, it is important that “non-nationalist” voices be heard, stressing cooperation for mutual benefit. The Association of World Citizens  is among such voices, stressing that the settlement of maritime delimitation disputes through adjudication by the World Court is the ideal approach. For World Citizens, the quality of the Law of the Sea is of special significance. The greater part of the oceans is considered res communis, a global common beyond national ownership.  Furthermore, the physical nature of the oceans suggests world rather than national solutions to the increasing need for management of marine resources and the marine environment.

Although most maritime delimitations are, in fact, achieved without recourse to adjudication and are settled by bi-lateral negotiations, submitting a dispute to the World Court can better ensure that the results of the delimitation process conform to the rules of international law.

The International Day of the Oceans can serve as the start of a strong mobilization of voices calling for good-faith negotiations and for a vision of cooperation among the States of the China Seas.

1) See the writings of the world citizen Louis B. Sohn, in particular his course at the Hague Court legal summer school “Settlement of Disputes Relating to the Interpretation and Application of Treaties” Recueil des cours Vol.150. 1976 II, pp. 205-294.   For a useful approach to the delimitations issues see A.O. Adede The System for Settlement of Disputes under the UNCLOS (Martinus Nijhoff Publishers, 1987)

2) Delimitation disputes are not new but reappear when politically useful for some reason. For a good overview of the history with maps of the disputed areas see Douglas Johnston and Mark Valencia Pacific Ocean Boundary Problems (Martinus Nijhoff Publishers, 1991).