DECCAN CHRONICLE. | V ASHOK KUMAR
Not a single case ends up in conviction as family members are involved. 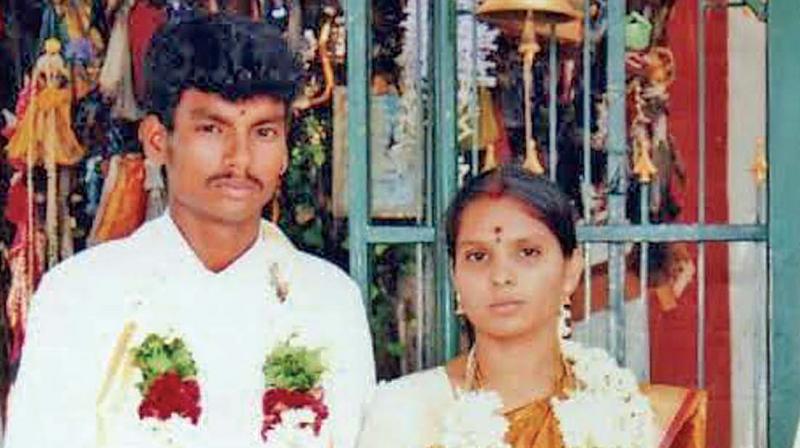 Dalit youth Shankar and wife Kausalya at the time of their marriage. (Photo: DC)

Coimbatore: In less than three years, Tamil Nadu has witnessed 81 incidents of honour killings with the ghastly murder of Dalit youth Shankar in Udumalpet in neighbouring Tirupur district being the latest.

The Dalit youth Shankar was attacked with machetes and sickle by a gang of five men in full public view near the crowded Udumalpet bus terminus on Sunday afternoon for marrying a caste Hindu girl Kausalya from Palani defying opposition by her parents.

“Though honour killings are on the rise, not a single case has ended up in conviction in the state as family members are involved in such murders,” said A Kathir, managing director of the NGO, ‘Evidence’.

Of the 81 incidents of honour killings, 80 per cent of victims are women and 20 per cent are men.

“Caste Hindu women, who love or marry a Dalit are murdered by their family members. On the other hand Dalit women, who marry caste Hindu men, are ditched due to societal pressure. Almost 84 per cent of Dalit women, who are into inter-caste marriage face humiliation due to marital discord,” said Kathir.

Gokulraj, who was in love with a girl from Gounder community, was murdered and his body was abandoned on the railway track at East Thottipalayam near Pallipalayam in Tiruchengode on June 24 last year.

In a similar tragic end to a love story, in 2012, Dalit youth E Ilavarasan, whose marriage to a Vanniyar girl triggered caste tension with torching of over 200 huts of Dalit families, was found dead near a railway track in Dharmapuri.

Though incidents of honour killings have been in prevalence for long, the culture of mob violence and daring murders in full public view have been sowed by caste-based outfits that are growing in popularity.

“Ghastly murders of Dalit youths only indicate that caste-based violence and politics are intertwined in Tamil Nadu. Those who unleash violence for the sake of community tend to enjoy the backing of caste-based outfits. It is hence Yuvaraj turned into a hero and was given rousing welcome when he arrived to surrender in Gokulraj murder case,” said R Athiyamaan, founder president of ‘Adhi Thamizhar Peravai’.http://deccanchronicle.com/nation/crime/150316/81-honour-killings-in-three-years-in-tamil-nadu.html

Book by Sowvendra Shekhar Hansda -The Adivasi Will Not Dance banned
The Population Myth -‘Islam is the pioneer of the concept of family planning '
Indian Politicians Making Sexist Remarks On Hathras Case Must Be Called Out
Mumbai lawyer got Dabholkar murder weapon destroyed: CBI