© Provided by The IndependentA nine-year-old-girl is launching legal action against the British government in a bid to bring her kidnapped father home.

Menabe Andargachew is the daughter of Andy Tsege, a joint British-US citizen who was kidnapped in 2014 in Yemen while waiting for a connecting flight by people believed to be working for the Ethiopian government.

Since then, he has been held in Ethiopia under a death sentence imposed in absentia in 2009, having had almost no contact with his family.

The Foreign and Commonwealth Office (FCO) has admitted to The IndependentMr Tsege’s detainment was “unacceptable”.

His daughter now wants to sue the government so they do more to get him back.

Mr Tsege was a secretary-general of a political group, called Ginbot 7, who are opposed to the current Ethiopian government. He was granted asylum in Britain on political grounds in 1983 and became a citizen in 2006.

Ginbot 7 claims to stand for “democratic and human rights [and] achieving economic prosperity and social justice,” according to their website. Their name means 15 May, the date of 2005 elections marred by fraud allegations and violence. But the Ethiopian government has branded them a terrorist group set on destabilising the country, although no other nation has recognised them as such.

The British government has been criticised for not pushing for Mr Tsege to be released, despite the circumstances of the trial reportedly being criticised by British officials in Ethiopia.

Menabe’s legal team said the British government’s approach – which has made “overtures” to the Ethiopian government but stopped short of demanding a full release – is “unlawful” and hoped a legal challenge would lead to Mr Tsege’s release.

Human rights group Reprieve, which has championed the case, said the 2009 in absentiatrial of Mr Tsege was described by observing American diplomats as “political retaliation” which “lacked basic elements of due process”.

British officials said they “have not been shown any evidence [against Mr Tsege] that would stand up in a UK court”. Other official British documents seen by Reprieve show British officials believed that the rendition and detention of Mr Tsege was “completely unacceptable”, with some papers asking if the UK had grounds for a “legal challenge”.

The UK has, in similar cases, asked for the release of individuals but has so far not done so to the Ethiopian government. Menabe and her lawyers believe this constitutes unlawful behaviour.

A spokesperson for FCO told The Independent: “The Foreign Secretary has raised Mr Tsege’s case with the Ethiopian Government repeatedly, making it clear the way he has been treated is unacceptable.

“The Prime Minister has also written to Prime Minister Hailemariam on two separate occasions regarding this case. While we welcome the improvement in access to Mr Tsege following the British Government’s intervention, it must include access to a lawyer and we will keep pressing for this. We will also continue to provide consular support to Mr Tsege and his family.”

However, when pressed on whether the FCO would be asking for the release of Mr Tsege, the spokesperson said there was “nothing further to add from us”. 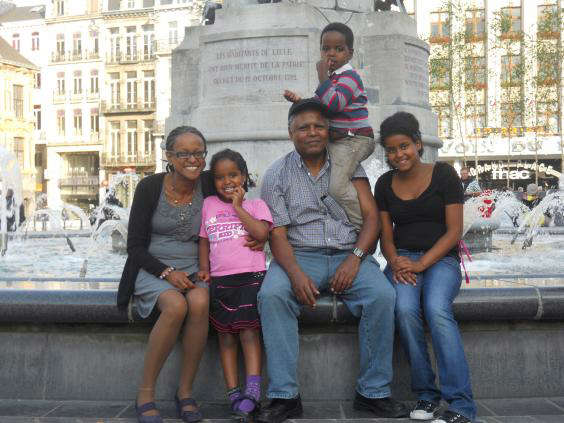 © The Independent Andy Tsege with his partner, Yemi Hailemariam, and their three children

Maya Foa, director of the death penalty team at Reprieve, said: “Andy Tsege has been subjected to a series of shocking breaches of international law by a supposed UK ally – from kidnap, to rendition, to an in absentia death sentence – simply because he expressed criticism of the Ethiopian regime.”

“It’s deeply disappointing, and simply irrational, that the British government refuses to ask for his release and put an end to these abuses. Enough is enough – ministers must call on Ethiopia to free Andy, and return him to his family without delay.”

The Ethiopian Embassy in London did not return The Independent’s phone calls on Friday. However in a statement to NBC, they said: “The stated intent of Andargachew Tsege’s organization — Ginbot 7 — is to overthrow the constitutional order through violent means and disrupt the national peace and stability of Ethiopia.

“Tsege was serving as a Trojan horse, assisting the Eritrean government’s repeated and ongoing attempts to wreak havoc and instability in the sub-region.”http://www.msn.com/en-gb/news/world/the-nine-year-old-suing-the-uk-government-because-they-wont-help-her-see-her-father/

The God Argument- Case against Religion and For Humanism
Canada has NO place for poor Activists from India #discrimination #mustread
#India- Women don't need mobile phones as they get distracted #WTFnews
Gujarat - Big Scam With Small Car, Nano