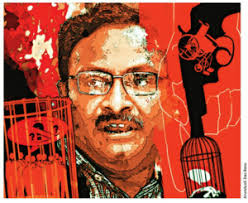 Serving life sentence for links with Maoists, GN Saibaba writes to governor; says he is unable to cope with conditions there

Unable to cope with the adverse conditions, including the biting cold, in Nagpur central jail, former Delhi University professor GN Saibaba, who is serving life sentence for links with the Maoists, has written to the Governor Ch Vidyasagar Rao for a transfer.

The deputy inspector general of prisons, (Nagpur), Yogesh Desai, confirmed that Saibaba had applied for transfer and that the file was with the government. Jail sources said that he wanted to be shifted to either Delhi or Hyderabad.

Saibaba was sentenced to life imprisonment by a sessions court in Maharashtra’s Gadchiroli district on March 7 this year. The court had also found four others guilty of waging war against the country and supporting the ideology of the banned organisation – CPI (Maoist). Gadchiroli Sessions Judge Suryakant Shinde sentenced Saibaba and four others – JNU student Hem Mishra, former journalist Prashant Rahi, Mahesh Tirke and Pandu Narote – to life, while the sixth accused Vijay Tirke was sentenced to 10 years’ rigorous imprisonment.

Saibaba, who is wheel-chair-bound with 90 per cent disability, was picked up from his Delhi residence in 2013 after Mishra and two others were caught with some letters and a memory card which, according to police, contained incriminating documents about CPI (Maoist). A raid was also conducted at Saibaba’s house and more such incriminating material found, according to police.

The Maharashtra Police arrested Saibaba in May 2014 on charges of links with Maoists.

According to the prosecution, Hem Mishra, Mahesh Tirki and Pandu Narote had taken Rs 5 lakh from a top Maoist commander Narmada Akka from the jungles of Gadchiroli. That money was allegedly to be delivered to Saibaba in Delhi for spreading the Maoist ideology in urban areas. Public prosecutor had presented 23 witnesses and 41 articles, including about 3 TB of data contained in hard disks recovered from Saibaba’s residence, in the court.

In October, the former DU professor in a letter to his wife Vasantha said he was frightened to think of the coming winter in the jail. “I am already shivering with fever. I don’t have a blanket, sweater or jacket. As the temperature goes down, I feel excruciating pain in my legs and left hand. It is impossible for me to survive the winter that starts from November,” he said in the letter.

In the letter Saibaba urged his wife to finalise his legal counsel and file for bail application at the earliest, warning that if this was not done, the situation would go out of hand.

Why Muslims vote for the BJP #NOMOre_2014
Joint Statement on Sixth meeting of the India-Pakistan Judicial Committee on Prisoners to Pakistan
A Six-Year-Old’s Death, After Rape, Roils Nepalese Town
Sunny Leone CNN IBN interview reeked of misogyny and misplaced moralising