A Conversation With: Journalist Naveen Soorinje 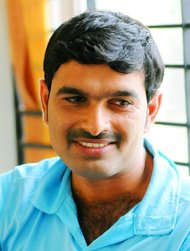 On July 28, 2012, Naveen Soorinje, a journalist with the Kannada television network Kasturi Newz 24 in Mangalore, Karnataka, covered an attack by a mob from the right-wing group Hindu Jagarana Vedike on a group of boys and girls having a birthday party at a suburban resort. A cameraman, Seetharam, who goes by one name, filmed the brutal assault, which lasted half an hour.

Widely known as “the homestay attack,” it was only one of a rising number of incidents of sectarian moral policing in the developing and modernizing city of Mangalore. But when Mr. Soorinje and Mr. Seetharam were arrested in November, along with 43 others, and charged with conspiracy, rioting and unlawful assembly, the case inspired an intense campaign for media freedom and Mr. Soorinje’s release from jail. Mr. Soorinje was freed on bail on March 23, and the charges against him and Mr. Seetharam were finally dropped on Friday.

In an interview with India Ink, Mr. Soorinje spoke about what he learned during his time in jail and the dangers he sees in extremist groups and in the complicit police in Mangalore.

Since your arrest in November 2012, you maintained that you only recorded the attack and were not a participant. What led to charges being dropped now?

Civil society groups and journalists appealed to the Karnataka chief minister’s office for charges to be dropped. They had approached the earlier B.J.P. [Bharatiya Janata Party] regime, but that was the government that in a way put me in jail, so we didn’t expect them to release me. It was only after the new C.M. from the Congress Party took charge that he signed the petition to drop charges against me. Of course, when the Congress was the opposition party earlier, they didn’t do anything then.

How were your five months in Mangalore jail?

This might sound odd, but it was good that I saw the inside of a jail. As a journalist, my view of crime stopped at the arrest, police and trial. The life of imprisonment was a blind spot. I found that the increase in communal tensions in Mangalore has led to even the jail being segregated. In the A block, are the Muslims and Dalits, largely convicted or accused of terrorism, smuggling or theft. The B block is the Hindu block, with thugs from right-wing groups — people who attacked girls for talking to boys, or for drinking. I’m Hindu, but since the attackers I filmed and thereby got arrested were in B, the cops thought I’d be safer with the Muslims and Dalits.

I stayed in different wards every few weeks, chatting with whoever was willing to talk. It was eye-opening, the abysmal conditions, the twisted interrogations, the stories of so many innocents or one-time petty criminals that languish in prison for ages while their trials go on for decades.

Have threats and intimidation against journalists grown in the past few years in Mangalore?

Yes, it has been a crucial part of the communal groups’ intention to intimidate society. After the pub attack of January 2009 — I was a print reporter then — [the Hindu extremist group] Sri Ram Sena upped its violent projects. Hindu boys and Muslims girls can’t eat ice-cream together, can’t sit together in a bus. The attacks on college kids were all over.

I’m lucky to have a secular, fair editor. I’d reported on all this with a group of like-minded reporters. We shared tip-offs, created maximum coverage. We were disgusted with the random attacks on women and even more ashamed by most media that focused on the so-called moral degradations — girls’ drinking and smoking and going with boys — than the assaults by these communal thugs.

We got life threats. People came around my house, screamed on the phone. They burned the press of the local paper I worked at, set fire to the editors’ chair. My editor was arrested; I was chased a few times. The head of Sri Ram Sena, in a press conference, said that it is not enough to kill one fellow. Openly, he said,” We should take out one more journalist, then Mangalore will be fixed.”

What have the police done to stop this?

These lumpen elements have free rein because of two things: people’s discomfort with modernity and westernization, and police complicity. In the homestay attack, when the police turned up, they conversed with the attackers for over half an hour. One victim tried to escape, but the police caught him and brought him back. In custody, the police allowed the attackers to beat him.

Why did they detain the victims? The Mangalore police do this — take the scared, assaulted kids to the station, call their parents, and then give them advice. “Don’t send your girls with boys, don’t let Muslims and Hindus interact in college, why is your child drinking, don’t you know Indian culture?” This is moral policing, what else? Beat, and then give unsolicited advice to the wrong person.

The police blamed you for not informing them about the attack even when you were tipped off earlier by a source.

That is untrue. I repeatedly called the inspector of the local police station, Ravish Nayak, from my official number. Nayak did not pick up. The attacks had begun by then, and there was mayhem; the poor girls were screaming. I asked my friend Rajesh Rao of channel TV-9 to call the police. He also called Nayak, again in vain.

My cameraman and I were the first people there, and we tried to record everything. Other journalists came in minutes. We all shot, but we couldn’t stop the drunk, crazy goons attacking the young boys and girls.

It was a birthday party. When I got there after a local source tipped me off — not one of the attackers, as my phone call record shows — a girl was sitting on the porch, and two boys were playing games on their mobile phone. There was no rave party, as the goons alleged.

You were also accused by the police of abetting the attack because you didn’t stop it.

This is an old dilemma in journalism: do you stop the action or do you report it? But here, I had no dilemma. I was screaming and requesting, “Don’t hit the girls.” The camera has caught my voice, but the attackers were unwilling to listen. They were like a pack of lions. I couldn’t physically stop them. No one could. [Read a translated version of Mr. Soorinje’s full account of the attack here.]

It is common today in India for mobs to call the local media informing them of a planned raid or attack. This is their way of getting publicity. Just 20 days before this homestay attack, a girl was molested publicly by a gang in Guwahati, Assam. In that, the cameraman was egging the attackers on, instructing them. So it may seem like I was in the same situation, but I was not.

How do the people of Mangalore react to this? Have the sectarian groups influenced their actions?

Mangalore is both modern and conventional. That friction is being exploited. People live their lives as they please, but in private. In public spaces like buses, colleges, restaurants, there is a lurking fear.

The homestay incident was in July 2012. After that, there have been 10 other assaults. None have been investigated, and visual evidence is limited. Moreover, some tabloids — why, even big dailies — mangle the issue. If the Bajrang Dal [a Hindu fundamentalist group] has slapped a girl who was smoking, the headline will say “Smoking girl slapped.” It’s a combination of right-wing ideology and power driving the police, goons and some of the media.

You are still with Kasturi TV, and still in Mangalore. Has this experience changed the way you report or live now?

There is an angle of caste that I’ve begun to understand. For example, all the boys and girls attacked in the homestay are Muslims or from backward castes. The accused goons are also from backward or lower castes, barely educated until third or fourth grade. All the leaders — of Sri Ram Sena and of the Vedike — are high caste, sitting happily in Bangalore, never arrested, only giving wildly inflammatory speeches on Hindutva to their minions without any consequence. I’ve realized that accountability must go further than the immediate actors.

I used to always try and do balanced reports — you know, quote both sides. But now I want to expose the attackers even more strongly. There is nothing to redeem them.

Rohini Mohan is a journalist based in Bangalore. She is working on a book about the civil war in Sri Lanka.

[This interview has been lightly edited and condensed.]