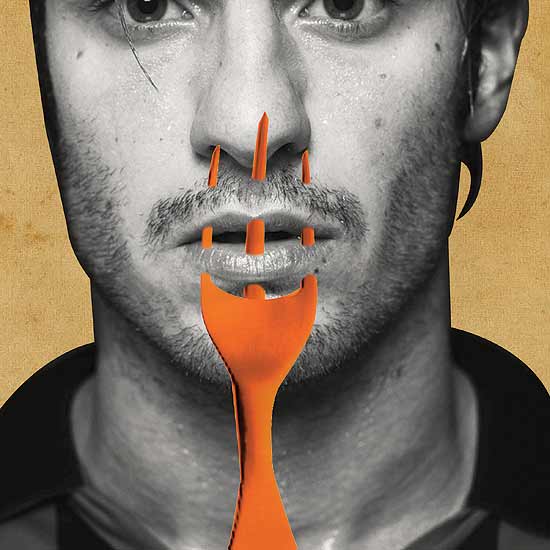 ILLUSTRATION BY SORIT
OPINION
A Cowed-Down Nation
Why kill over a people’s dietary preference for beef?
MEENA KANDASAMY in The Outlook
“The university and all teaching systems that appear simply to disseminate knowledge are made to maintain a certain social class in power, and to exclude the instruments of power of another social class…. The real political task in a society such as ours is to criticise the workings of institutions, which appear to be both neutral and independent; to criticise and attack them in such a manner that the political violence which has always exercised itself obscurely through them will be unmasked, so that one can fight against them.”

It looks like Foucault’s “real political task” is what the organisers of the recent beef-eating festival at Osmania University set out to do: they fought the “food fascism” that kept beef out of the menu, reminded the secular state that a university hostel mess was not Sankara math, and criticised the imposition of caste-Hindu dietary diktats on Dalits from within the confines of a seemingly neutral educational institution. When they rapped “Beef is the secret of my energy” with all the soul of an outlaw anthem, it sounded like the secret heartbeat of an anti-caste cultural revolution.

But the stone-pelting, vehicle-torching ABVP hooliganism and the OU vice-chancellor S. Satyanarayana’s statement that beef would not be served in hostels unmasked a pattern of political violence. Tucking into beef biriyani behind the smokescreen of the teargas firing at OU, one could imagine the rage of a caste-Hindu mob that lynched five Dalits in Jhajjar, Haryana, in 2002 for skinning a dead cow. A week earlier, Hindu extremists had triggered communal disturbances in Hyderabad’s Old City area by hurling beef in the Hanuman temple at Kurmaguda. Both these incidents highlight the ideological framework of Hindutva mobilisation using a certain female quadruped political player who is capable of igniting riots, whose dead flesh could cause a city to disintegrate into communal violence.

Instead of acknowledging the beef-fest as an act of Dalit assertion, right-wing commentators said it was a ploy to dent the Telangana struggle. They propped up pork to silence other minorities and cast this as a Hindu-Muslim stand-off when it was actually about untouchability. Dr Ambedkar had theorised that broken men (and women) rebelling against caste became untouchables because they were Buddhists and beef-eaters. Beef, being a Dalit food, was kept away from caste-Hindus and stigmatised. To enforce the strict regimentation of caste codes, beef-eating was prohibited for Hindus. And not just in the Manusmriti.

Because India is a Hindu state at heart despite all apparitions to the contrary, Article 48 of the Constitution requires the State to take steps to prohibit the slaughter of cows. Anti-cow slaughter laws in most states promise prison terms. In implementing Hindutva, nobody outdoes Narendra Modi. He sparked off the state-aided slaughter of Muslims a decade ago, but now tries to balance his karma by conducting dental and cataract surgeries for cows. Note: Hinduism only asks of a ruler to protect cows from slaughter. While Muslim victims of the Gujarat riots still languish in relief camps, Modi gloats that no cow has to travel more than three kilometres to reach a health camp. In this animal farm, Her Holiness Mother Cow is a first-class citizen with health insurance and a pension plan. Dalits, Adivasis, Muslims and Christians, being beef-eating minorities, cannot press for similar privileges.

She hasn’t always been treated with motherly respect, though: D.N. Jha’s book The Myth of the Holy Cow documented the problematic (and under-appreciated) history of Brahmin/Hindu beef-eating in ancient India, before the taboos evolved, while Manish Jha’s film Matrubhoomi: A Nation Without Women depicted the sexual abuse of a cow by sex-starved men. Perhaps that’s why when the BJP was in power, the National Cow Commission (2002) suggested forming a Central Cattle Protection Rapid Task Police Force and wanted amendments to pota to enable detention of those smuggling cows.

There is no point getting offended if someone enjoys beef in all its juicy glory. Since nobody is being force-fed, tolerance means digesting the idea that just as cows are meant to be milked, cows are also meant to be meat. There cannot be a shred of doubt that in a racist nation which advertises vaginal skin-lightening creams, the large, naive eyes and flawless complexion make the cow an attractive mother. Men take pride in being mummy’s boys, but it is high time Hindutva organisations and secular, state-run universities stop being swayed by bovine sex appeal, step out of their Oedipus complex and remind themselves that cows, at least the fertile ones, are only mothers of calves. Why kill for a cow, when you aren’t born of one?