A federal judge on Wednesday stopped President Trump’s second attempt to temporarily ban visa holders from several majority-Muslim countries — and nearly all refugees — from entering the United States, hours before it was supposed to take effect. The ruling found that the order likely violates a constitutional prohibition against religious discrimination.

It was a scathing rebuke for an order that administration officials spent weeks reworking, in hopes of avoiding the judicial blockade that the first attempt sailed into in January.

Trump immediately panned it, in a speech in Tennessee. “This is, in the opinion of many, an unprecedented judicial overreach,” he said.

The temporary restraining order came from federal judge Derrick K. Watson, of the District of Hawaii. It prevents the Trump administration from going forward with its plan to stop issuing visas to residents of Iran, Libya, Somalia, Sudan, Syria, and Yemen; to stop allowing refugees to enter the US for 120 days; and to cut the US’s total refugee quota for the current fiscal year (which ends in September) in half.

The worst news for the administration is that the ruling suggests future revisions of the ban won’t help its chances of survival. Watson declared that the travel ban is, for all intents and purposes, a Muslim ban — that its reason for being fundamentally violates the First Amendment:

A reasonable, objective observer—enlightened by the specific historical context, contemporaneous public statements, and specific sequence of events leading to its issuance—would conclude that the Executive Order was issued with a purpose to disfavor a particular religion, in spite of its stated, religiously-neutral purpose.

The refugee and visa ban was the first major policy that Trump put into effect — but at this point, it’s been tied up in court for much longer than it was actually in force. After a week of widespread airport chaos and detentions, and contradictory legal interpretations from within the federal government, the original version of the order was put on legal hold.

After a series of defeats in the Ninth Circuit Court of Appeals (the same circuit where Wednesday’s ruling came down), the administration took the unusual step of all but conceding defeat, and the even more unusual step of seeking input from the rest of the federal government in order to tighten the legal and policy case for the ban.

It does not appear to have worked. Unless overturned by a higher court, Watson’s ruling means the administration won’t get the chance to demonstrate a smoother rollout of the travel ban, as it was planning to do Tuesday. And it might never get the chance to put visas and refugees on hold, at all.

The temporary restraining order, like those issued by other federal judges against the original ban (which ultimately inspired the Trump administration to give up and try again with this version), is designed to keep the status quo in place while the case against the order makes its way through the courts. It’s not a ruling that the executive order is unconstitutional.

But the text of Watson’s order makes it pretty clear that he thinks the order violates the First Amendment’s establishment clause.

This was something judges were a little more leery of during the first round of travel ban fights. The state argued that Trump’s executive order should be seen as the “Muslim ban” that candidate Trump promised on the campaign trail. The federal government has denied this at every turn — pointing out, for example, that most Muslim visa holders don’t come from the six blacklisted countries.

Judge Watson was not having it:

The notion that one can demonstrate animus toward any group of people only by targeting all of them at once is fundamentally flawed. The Court declines to relegate its Establishment Clause analysis to a purely mathematical exercise.

But the federal government can’t write the allegation of animus out of the text of an executive order. And if Judge Watson, and the other judges hearing challenges to travel ban 2.0, sides with the state of Hawaii and the other travel ban challengers, the first big policy of the Trump administration will be permanently sunk.

The federal government is likely to try to get the hold revoked by a higher court — just as it did with the original executive order. Trump’s Department of Justice refused to commit to such a step Wednesday, but Trump himself told a crowd, at a Nashville rally, that he was going to fight the case all the way to the Supreme Court if he needed to.

Trump also said that he preferred the first version of the travel ban — and called the revised version, the one that his lawyers had painstakingly worked to put together, merely a “watered-down” version of the original.

In other words, he continued to make Watson’s case — that the revised executive order, despite its efforts to make a national-security case for selecting the 6 blacklisted countries, is just a further attempt to make a Muslim ban look constitutionally passable — for him. 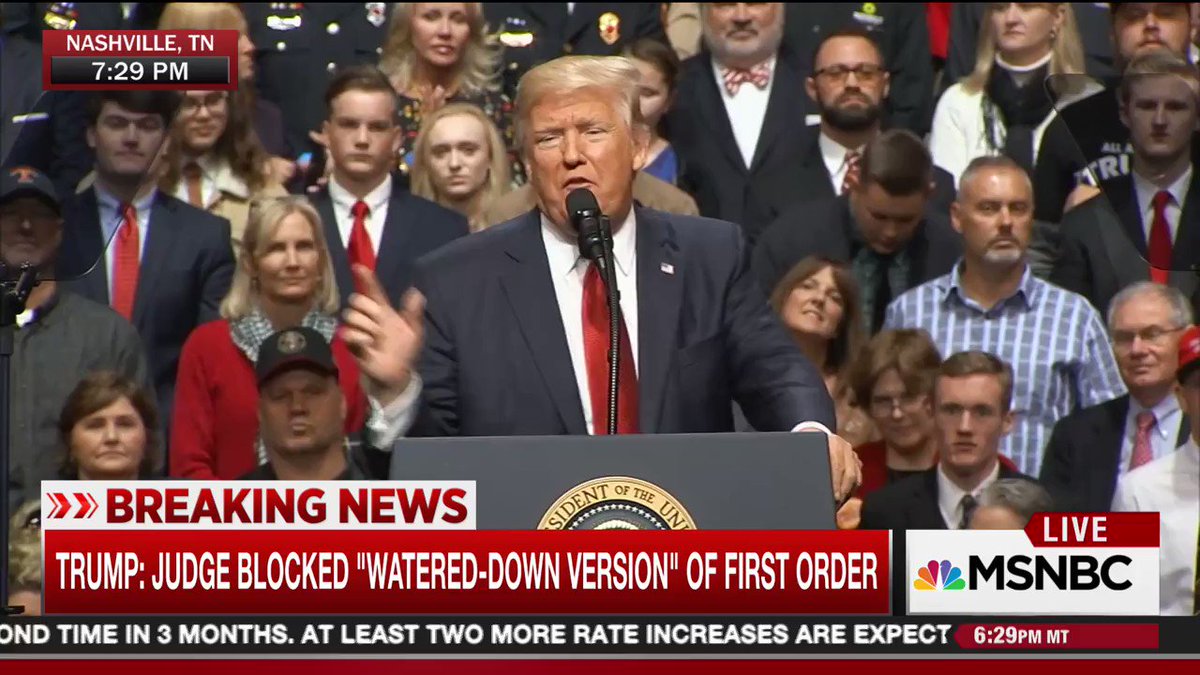 Trump says he wanted to bring the first travel ban that was blocked to the Supreme Court. “We ought to go back to the first one!”

If Trump wants to keep fighting for the “watered-down” ban, he’s going to have to go through the Ninth Circuit Court of Appeals — the very same court that kept the first travel ban on hold. On Wednesday, the Ninth Circuit announced that it had decided not to reconsider that ruling with a fuller panel of judges (at least one judge on the bench had asked for it, but the majority of judges on the circuit wanted to let the first ruling stand).

In other words, the whole Ninth Circuit, more or less, agreed that the first version of Trump’s travel ban was impermissible, just as the president himself said the second one was just an inferior version of the first.

Taken together, Watson’s order, Trump’s reaction, and the Ninth Circuit’s retrenchment aren’t a final shutdown of the visa and refugee ban. But they’re not a simple pause either.http://www.vox.com/2017/3/15/14940586/travel-ban-unconstitutional-muslim-hawaii