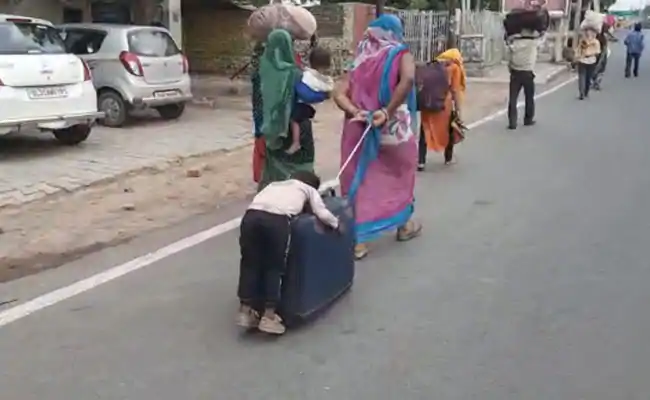 This letter of apology will never reach you. You perished last month. You were walking from a Telangana chilli farm to your home in a Chhattisgarh village. Your 12-year-old exhausted legs could not carry you for all those hundreds of kilometres in the scorching sun.

Yours is not the only tragedy. A database — Thejesh GN — shows that until May 11, while walking thousands of kilometres towards home, 29 have died of exhaustion and 83 have died in accidents on the road. This week, 17 died in 24 hours, hit by speeding trucks on the highway. In Aurangabad, train tracks have turned red with blood — 16 weary workers, walking from Maharashtra towards Madhya Pradesh, lay down to doze off on the tracks. The people felt the elevation of the tracks would protect them from wild animals but were cut down by a goods train. With public transport cruelly shut off, workers even piled into an airless concrete mixer to travel some distance towards home.

We, the so-called urban middle class, the prosperous, the educated, have collectively failed you. We are the beneficiaries of the new economy, we are the aspirational Indians, we love our malls, our penthouses, our swimming pools. You built all of these, yet we could not see you. You were invisible to us, hidden away behind the metallic jungle of scaffolding. Today you walk on the six-lane highways you built for our SUVs.

We see the bewildered pain in your eyes. It makes us realise that however much charity we throw at you, make you line up for food packets or herd you into camps, we can never make up for the fact that all of us — politicians and civil society alike — have snatched away the most fundamental of all democratic rights: your self-respect, your dignity. As skilled breadwinners, asking for food is terrible humiliation.

You built our houses, but we never asked that you get low-cost housing. We have never demanded that you get any form of social security. As we gazed out of our skyscrapers at the slums outside, we wanted to blank you out and pretend you weren’t there.  We wanted slums to be demolished, or to build walls between us and you.

What did we argue in our defence? We have no powers, what can the helpless middle class do, given the scale of the deprivation? It’s the state and the politician, surely, who must be the provider.

But sadly, most politicians couldn’t care less. Politicians have always seen you as a vote bank, regularising slum colonies only before elections but making little effort to provide basic amenities.

Promises of Swachh Bharat were made, but the website Indiaspend records that in 2015-16, 10% of urban households mostly in slum colonies, still practised open defecation because of lack of access to functioning toilets.

If the politicians ignored you, so did civil society. Yes, workers who were earlier called “maidservants” are now called “domestic help”, but the change in nomenclature has hardly resulted in a change in mindset. Across middle-class India, the relationship with domestic workers continues to be exploitative and transactional. RWAs have attempted to stop domestic helps from coming to work as they fear they are corona carriers, ignoring the fact that most of those who carry the virus are those who have travelled abroad.

We speak imperiously of social distancing, but such measures are meaningless for families living in 6×8 feet tenements. For many of “us”, the lockdown is almost an elite privilege: we can catch up on Netflix shows and learn new hobbies. Today the international buzzword is work from home (WFH), but for you the construction site was your home. You lived in dark, dingy, temporary basements while building gleaming mansions. What does WFH mean to you?
Sooner or later the lockdown will end and workers from villages will once again stream back to the city. Will they be condemned to the same lives living without proper shelter or security? Surely, it’s time for a new contract between “you” and “us”, for a new relationship, a new way of looking at each other. There can be no going back.

You cannot go back to being simply statistics without faces or names. Greater institutional protection is an urgent necessity. It’s time “we” recognise your legal constitutional status as citizens equal to “us”, in no way lesser, however ragged your clothes.

Perhaps that would be the best way to remember you, Jamlo Makdam, and to seek your forgiveness. You, the lonely 12-year-old, who died walking hundreds of kilometres to somehow reach your mother.

Dalit who complained of bias barred from village
India - The blurring line between corporate and national interests
Jairam Ramesh launches SADP project in Malkangiri , Orissa
Essar Tapes- conversation between Ambani- Seth and others