A long march of the dispossessed to Delhi 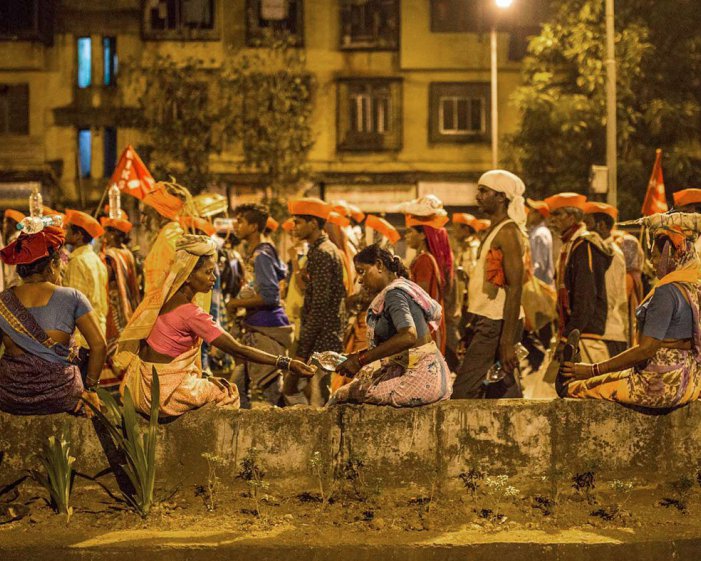 Imagine a democratic protest where a million farmers, labourers and others march to the capital and compel discussion of the exploding crisis of the countryside in a special three-week session of Parliament

India’s agrarian crisis has gone beyond the agrarian.

It’s a crisis of society. Maybe even a civilizational crisis, with perhaps the largest body of small farmers and labourers on earth fighting to save their livelihoods. The agrarian crisis is no longer just a measure of loss of land. Nor only a measure of loss of human life, jobs or productivity. It is a measure of our own loss of humanity. Of the shrinking boundaries of our humaneness. That we have sat by and watched the deepening misery of the dispossessed, including the death by suicide of well over 300,000 farmers these past 20 years. While some – ‘leading economists’ – have mocked the enormous suffering around us, even denying the existence of a crisis.

The National Crime Records Bureau (NCRB) has not published data on farmers’ suicides for two years now. For some years before that, fraudulent data logged in by major states severely distorted the agency’s estimates. For instance, Chhattisgarh and West Bengal and many others claimed ‘zero suicides’ by farmers in their states. In 2014, 12 states and 6 Union Territories claimed ‘zero suicides’ among their farmers. The 2014  and 2015 NCRB reports saw huge, shameless fiddles in the methodology – aimed at bringing down the numbers.

And yet they keep rising.

Meanwhile, protests by farmers and labourers are on the rise. Farmers have been shot dead – as in Madhya Pradesh. Derided or cheated in agreements, as in Maharashtra. And devastated by demonetisation, as in just about everywhere. Anger and pain are mounting in the countryside. And not just among farmers but amongst labourers who find the MNREGA being dismantled by design. Amongst fisherfolk, forest communities,  artisans, exploited anganwadi workers. Amongst those who send their children to government schools, only to find the state itself killing its own schools. Also, small government employees and transport and public sector workers whose jobs are on the anvil. 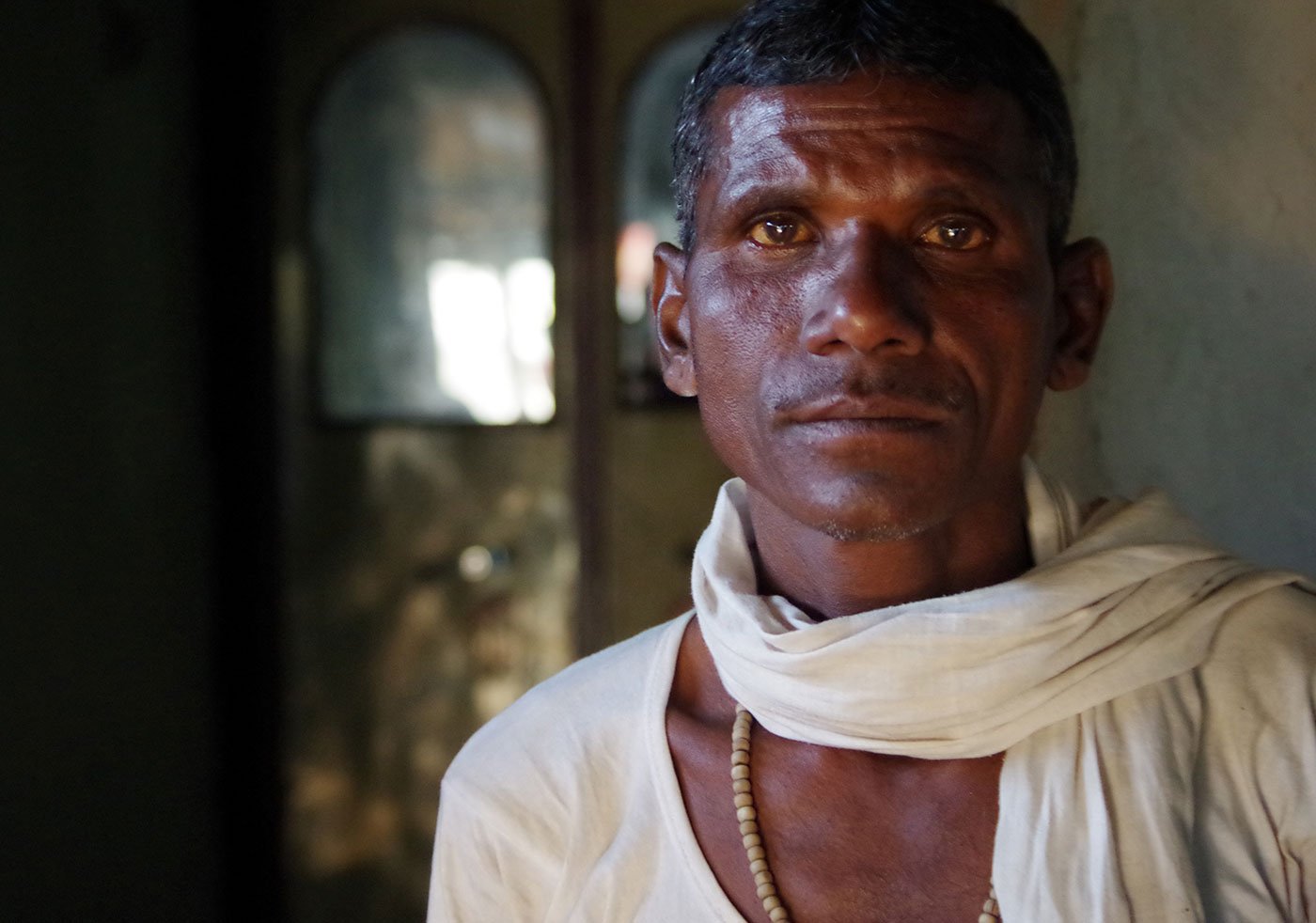 And the crisis of the rural is no longer confined to the rural. Studies suggest an absolute decline in employment in the country between 2013-14 and 2015-16.

The 2011 Census signalled perhaps the greatest distress-driven migrations we’ve seen in independent India. And millions of poor fleeing the collapse of their livelihoods have moved out to other villages, rural towns, urban agglomerations, big cities – in search of jobs that are not there. Census 2011 logs nearly 15 million fewer farmers (‘main cultivators’) than there were in 1991. And you now find many once-proud food-producers working as domestic servants. The poor are now up for exploitation by both urban and rural elites.

The government tries its best not to listen. It’s the same with the news media.

When the media do skim over the issues, they mostly reduce them to demands for a ‘loan waiver.’ In recent days, they’ve recognised the minimum support price (MSP) demand of farmers – the Cost of Production (CoP2) + 50 per cent. But the media don’t challenge the government’s claims of already having implemented this demand. Nor do they mention that the National Commission on Farmers (NCF; popularly known as the Swaminathan Commission) flagged a bunch of other, equally serious issues. Some of the NCF’s reports have remained in Parliament 12 years without discussion. Also the media, while denouncing loan waiver appeals, won’t mention that corporates and businessmen account for the bulk of the non-performing assets drowning the banks.

Perhaps the time has come for a very large, democratic protest, alongside a demand for Parliament to hold a three-week or 21-day special session dedicated entirely to the crisis and related issues. A joint session of both houses. 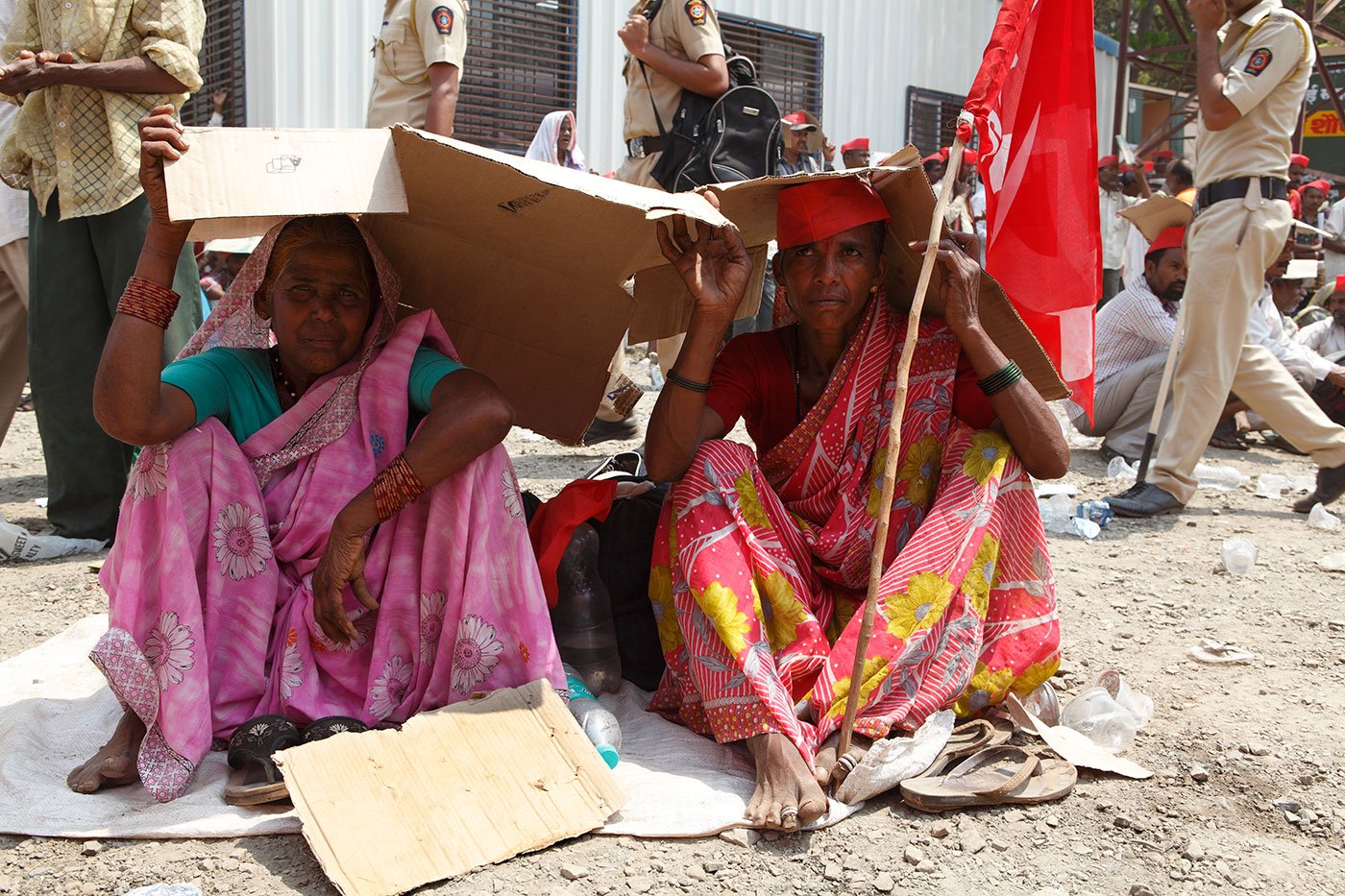 On what principles would that session be based? The Indian Constitution. Specifically, the most important of its Directive Principles of State Policy. That chapter speaks of a need to “minimise the inequalities in income” and “endeavour to eliminate inequalities in status, facilities, opportunities….”   The principles call for “a social order in which justice, social, economic and political, shall inform all the institutions of the national life.”

The right to work, to education, to social security. The raising of the level of nutrition and of public health. The right to a better standard of living. Equal pay for equal work for men and women. Just and humane conditions of work. These are amongst the main principles. The Supreme Court has more than once said the Directive Principles are as important as our Fundamental Rights.

An agenda for the special session? Some suggestions that others concerned by the situation can amend or add to:

3 days: Discussion of the Swaminathan Commission report – 12 years overdue. It submitted five reports between December 2004 and October 2006 that cover a multitude of vital issues and not just MSP. Those include, to name a few: productivity, profitability, sustainability; technology and technology fatigue; dryland farming, price shocks and stabilisation – and much more. We also need to halt the privatisation of agricultural research and technology. And deal with impending ecological disaster.

3 days:  People’s testimonies. Let victims of the crisis speak from the floor of Parliament’s central hall and tell the nation what the crisis is about, what it has done to them and countless millions of others. And it’s not just about farming. But how surging privatisation of health and education has devastated the rural poor, indeed all the poor. Health expenditure is either the fastest or second fastest growing component of rural family debt.

3 days:  Credit crisis. The unrelenting rise of indebtedness. This has been a huge driving factor in the suicide deaths of countless thousands of farmers, apart from devastating millions of others. Often it has meant loss of much or all of their land. Policies on institutional credit paved the way for the return of the moneylender.

3 days:  The country’s mega water crisis. It’s much greater than a drought. This government seems determined to push through privatisation of water in the name of ‘rational pricing’. We need the right to drinking water established as a fundamental human right – and the banning of privatisation of this life-giving resource in any sector. Ensuring social control and equal access, particularly to the landless.

3 days: The rights of women farmers. The agrarian crisis cannot be resolved without engaging with the rights – including those of ownership – and problems of those who do the most work in the fields and farms. While in the Rajya Sabha,  Prof. Swaminathan introduced the Women Farmers’ Entitlements Bill, 2011 (lapsed in 2013) that could still provide a starting point for this debate.

3 days: The rights of landless labourers, both women and men. With mounting distress migrations in many directions, this crisis is no longer just rural. Where it is, any public investment made in agriculture has to factor in their needs, their rights, their perspective.

3 days: Debate on agriculture. What kind of farming do we want 20 years from now? One driven by corporate profit? Or by communities and families for whom it is the basis of their existence?  There are also other forms of ownership and control in agriculture we need to press for – like the vigorous sangha krishi (group farming) efforts of Kerala’s Kudumbashree movement.  And we have to revive the unfinished agenda of land reform. For all of the above debates to be truly meaningful – and this is very important – every one of them must focus, too, on the rights of Adivasi and Dalit farmers and labourers.

While no political party would openly oppose such a session, who will ensure it actually happens? The dispossessed themselves. 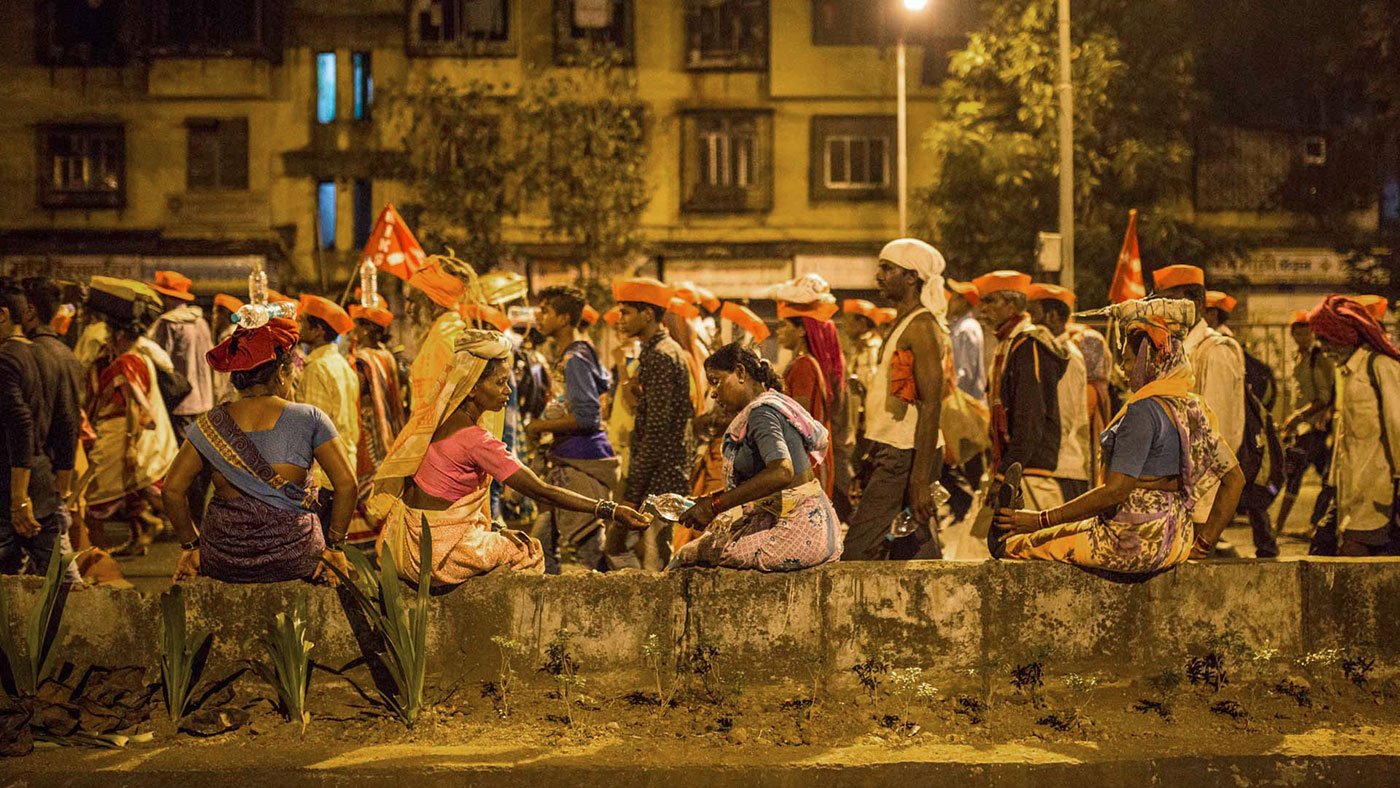 The morcha of farmers from Nashik to Mumbai in March has to go national –  not just of farmers and labourers, but also others devastated by the crisis

In March this year, 40,000 peasants and labourers marched for a week from Nashik to Mumbai making some of these very demands.  An arrogant government in Mumbai dismissed the marchers as ‘urban Maoists’ with whom it would not talk. But caved in within hours of the multitude reaching Mumbai to encircle the state legislative assembly. That was the rural poor sorting out their government.

The highly disciplined marchers struck a rare chord in Mumbai. Not just the urban working class, but also the middle classes, even some from the upper middle classes, stepped out in sympathy.

We need to do this at the national level – scaled up 25 times over. A Long March of the Dispossessed – not just of farmers and labourers, but also others devastated by the crisis. And importantly, those not affected by it – but moved by the misery of fellow human beings. Those standing for justice and democracy. A march starting from everywhere in the country, converging on the capital. No Red Fort rallies, nor skulls at Jantar Mantar. That march should encircle Parliament – compel it to hear, listen and act. Yes, they would Occupy Delhi.

It might take many months to get off the ground, a gargantuan logistical challenge. One that has to be met by the largest and widest coalition possible of farm, labour and other organisations. It will face great hostility from the rulers – and their media – who would seek to undermine it at every stage.

It can be done. Do not underestimate the poor –  it is they, not the chattering classes, who keep democracy alive.

It would be one of the highest forms of democratic protest – a million human beings or more showing up to ensure their representatives perform. As a Bhagat Singh, if alive, might have said of them: they could make the deaf hear, the blind see and the dumb speak.