A Modi win can make Muslims ‘irrelevant’ in Indian politics 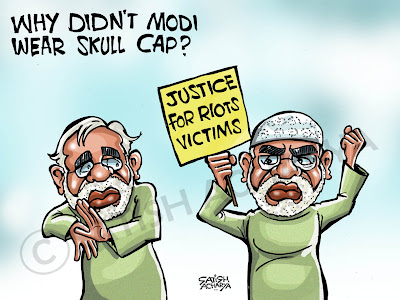 Indian democracy is at a crossroads. There is a real danger that the 2014 general election may propel it on a perilous path. If opinion polls are to be believed, come May 16 and Narendra Modi may lay his claim to be the next Prime Minister of India. Whether Modi as PM will be good or bad for India may be a matter of debate, but the “anointment” of Modi would certainly widen India’s “democratic deficit”. A Modi win will mean that a party or leader may or may not get Muslim votes and still get to rule over India. It is a scary prospect.

In a first-past-the-post voting system, not getting the support of the country’s largest minority population and still being able to form a government is always a possibility, but it is definitely not “desirable”. And if you are carrying the baggage of history like Modi, then it becomes much more significant. By all accounts, a very sizable population of Muslims is not likely to vote for Modi and the BJP in this general election. What if Modi still becomes Prime Minister? If you are on the “right” side of demographics, you may not bother at all. But if you are a Muslim, it is a worrisome thought.

If BJP wins, Muslims may be justified in having a sense of “powerlessness”. It may sound harsh and a bit of over-exaggeration, but it is the sad reality that the electoral success of BJP is tantamount to “disempowerment” of Muslims in Indian politics — this is more true in states where BJP is a dominant player. Wherever BJP is a primary player, all other so-called “secular” parties take it for granted that a significant majority of Muslims will not vote for the saffron party, rather they will vote for a party which is in the best position to defeat it. The assumption that to win Muslim votes one needs to be seen as a frontrunner to defeat BJP has created a sort of passive or rather negative outlook among political parties. A party need not have a positive agenda to win the support of Muslims — it should just be seen to be best placed to defeat BJP. The concept of “secularism” has been simplified and reduced to a kind of competition among parties to project themselves as being the most anti-BJP. They think it is sufficient to win them Muslim votes.

The antagonistic electoral relationship between Muslims and BJP has created a lose-lose situation for both. BJP starts its electoral fight with a reasonable amount of negative votes in areas where Muslims are in a position to play an important role. Muslims, on the other hand, are in no position to vote for a candidate and party of their choice. They are rather compelled to vote for a candidate who can ensure the defeat of BJP.

At times, the winnability of a BJP candidate forces Muslims to even practise “sly” politics. They fear that too much open polarization of Muslims may lead to consolidation of Hindu votes. This is what is likely to happen in Varanasi this time. Going by media accounts, Muslims are keeping a low profile for fear of polarization of Hindu votes. Working behind the scene, some Muslim leaders impressed upon local don Mukhtar Ansari to withdraw his candidature against Narendra Modi to stop a division of community votes. But Muslims are unlikely to openly vouch their support for a particular candidate till the last moment. They are expected to wait and watch to guess who is most likely to give a fight to Narendra Modi and then vote accordingly — that too without being too vocal and open about it.

It is an unsavoury commentary not only on BJP but on all other parties too. They have forced India’s largest minority community to practise the politics of fear. In fact, more disappointing is the politics of “secular” parties. True, BJP is not helping its cause and the fear of the saffron party is genuine among Muslims. At the same time, these “secular” parties are competing with one another to create a bogey of Modi and BJP among Muslims. Some of these parties are hoping to cash on these BJP-versus-Muslims sentiments and are even doing their bit to communally polarize the electorate. Others have become spectators or are trying to get Muslim clerics to issue fatwas in their favour. Unfortunately, these “secular” parties have placed the burden of stopping Modi from coming to power solely on Muslims. At the cost of sounding reductionist, one can say that these “secular” parties have framed the political debate in a way that if Modi came to power, it would be the fault of Muslims — for, they failed to vote “tactically” to defeat BJP.

BJP and Narendra Modi have further muddled the electoral field for themselves and Muslims. BJP is sending mixed signals and is working at two levels: trying to win over the support of Muslims while keeping its Hindutva base intact. To win their support, BJP president Rajnath Singh is ready to offer an apology to Muslims for any mistakes committed by the party in the past. Reaching out to Muslims, Rajnath Singh said, “Try us once. If we don’t come up to your expectations, don’t look at us ever again.”

Even Narendra Modi has been measured and conciliatory in his election speeches. At a public rally in Patna, Modi said that it was for Hindus and Muslims to decide whether they wanted to fight each other or together against poverty. Unlike previous elections, Modi also has been avoiding using phrases like “Maulana Mulayam” in his rallies. But at the same time, Modi is contesting from Varanasi, trying to send a signal to his hardcore Hindu supporters. Being  BJP’s PM candidate, it would have been befitting for Modi had he decided to follow in Atal Bihari Vajpayee’s footsteps and contest from Lucknow. Instead, Modi has chosen Varanasi as his second seat. Though a city in itself can’t be held secular or communal, if one were to describe Lucknow and Varanasi, the first can be said to represent more of the Ganga-Jamuna culture while the latter is primarily known as an ancient Hindu holy city. Thus by opting for Varanasi over Lucknow, Modi is again sending a subtle message to his supporters. Moreover, Modi has been wearing all kinds of headgear during his campaign trails across India, but he has reiterated his decision not to don a “skull cap”.

Then there is Amit Shah — a close aide of Narendra Modi and election-in-charge of BJP in UP. Amit Shah is working to polarize the atmosphere on the ground level in the state. He was issued notice by the Election Commission for his “revenge speech” in Muzaffarnagar. Finally, leaders like Pravin Togadia and Giriraj Singh are further queering the pitch for BJP.

This BJP-Muslims fault line has created a structural disjoint in Indian politics. Despite all its efforts, BJP can’t claim to be a true national party unless it starts getting support of Muslims without fear or favour; though, it may increase its reach beyond the Hindi heartland and may become a pan-India party in this election itself, it can’t earn the tag of a real national party. This BJP-Muslims divide is also stopping India from being a functional bipolar polity at the national level. Time and again, regional parties have failed to offer any credible and stable coalition. This has given rise to the notion of TINA (there is no alternative) and has lulled Congress into believing that only it can rule India at the central level. Much of the smugness of Congress leaders in UPA-2 was a reflection of their buying into the TINA argument.

The question is, how to deal with this BJP-Muslims gulf in Indian politics. The burden of making the first move lies with Narendra Modi and BJP. If Modi becomes Prime Minister —  though it is still a very big “if” — he should reach out to Muslims. Modi will be in a “position of strength” to do so. He is already signalling his desire to this effect — whether it’s electoral posturing or genuine, we don’t know. In a recent interview, Modi said that it is his “responsibility” to reach out to all sections of society, which includes Muslims. The BJP PM candidate also said that the Constitution, not the RSS, would guide his actions.

If a “victorious” Modi is able to bring about BJP-Muslims rapprochement, he may be said to have atoned for his inaction during the Gujarat riots.