A people’s court in the middle of a jungle: How journalists helped secure CRPF jawan’s release 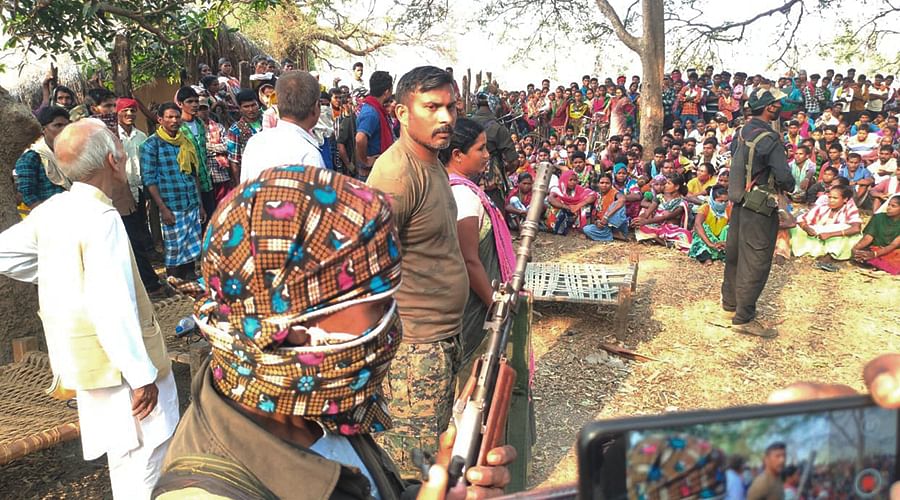 Manhas at the jan adalat.

It was a long journey to bring Rakeshwar Singh Manhas home.

Manhas being untied by Maoists before being handed over to the delegation.

It was late evening on April 4. Ganesh Mishra, a freelance reporter, was sitting in his office in Gaurav Path Marg in Chhattisgarh’s Bijapur. The camp of the CRPF’s 170 battalion was across the road, and Mishra was filing a story on the gunfight between security personnel and Maoists on April 3.

Suddenly, Mishra’s phone rang. It was Komal Singh, the deputy inspector general of the CRPF, and he sounded concerned. He told Mishra that a CRPF jawan had been missing after the attack and asked if Mishra could help find out whether the jawan was dead or alive.

“I immediately made inquiries with my sources but could not get any lead,” Mishra told Newslaundry. “So, I broke the news on social media.” Other media houses swiftly followed suit. The jawan was identified as Rakeshwar Singh Manhas.

On April 5, Mishra went to Cherpal village to report on a story related to the funeral of a slain security personnel. When he was traveling back to Bijapur, he received a call from an unknown number at around noon.

“The caller identified himself as Vikap and said he is a Naxal spokesperson,” Mishra said. “He said the jawan reported missing was in their custody and is safe; he said the jawan was injured by splinters but that the Naxals had given him proper treatment and they would release him. When I asked when, he said he would inform me and would also release a press note and disconnected the phone.”

Vikap sent Mishra the press note the next day at around 5.30 pm. Minutes later, an unknown number called him and said the Maoists were ready to release Manhas.

“The caller told me to ask Bastar’s inspector general of police, P Sundarraj, and the government to form a delegation for talks,” Mishra said. “He said the delegation should come along with me and a few of my journalist friends to a spot decided by the Naxals for the release of the jawan. He specified that Manhas would be released in our presence.”

That’s how Mishra, a group of journalists, and two government-appointed mediators wound up in the forest with a group of Maoists, waiting to bring Manhas home.

After the phone call on April 6, Mishra telephoned Sundarraj, as instructed, who in turn told him that he would talk to the government and form a delegation.

“Everything was kept very confidential as the matter was sensitive,” Mishra said.

At 11 am on April 7, an unknown number sent Mishra a photo of Manhas on WhatsApp. An hour later, he received a phone call from someone who identified himself as a Maoist.

“They asked me to confirm whether or not the administration had prepared a delegation,” he said. “I immediately contacted IG sir [Sundarraj] who confirmed that a two-member team had been made.”

The team comprised Dharampal Saini, a social activist and Padma Shri awardee, and Telam Boraiya, president of an Adivasi community group called Gondwana Samaj. Saini works for the education of Adivasi girls in Bastar, while Boraiya is a former schoolteacher.

Mishra communicated this to his Maoist contact who then called him back with details.

“They told me where the release would happen and asked me to accompany the delegation with four or five journalist friends,” Mishra said. “I said it wasn’t possible to go on the day itself since one member of the delegation lives in Jagdalpur. I asked for more time and they agreed.”

The five journalists whom Mishra selected were Mukesh Chandrakar, Chetan Kapewar, K Shankar, Ranjan Das, and Yukesh Chandrakar, along with a cameraperson named Ravi. The group met up with Saini and Boraiya at Tarrem police station that night. At around 4 am on April 8, they set off for the release location on motorcycles.

The delegation with Manhas.

“We reached Jonaguda around 8 am, as instructed, and waited there for about half an hour,” said Chetan Kapewar. “Two or three Maoists came and took us 10 km into the forest. They had arranged breakfast for us. Slowly, people from 20-25 nearby villages began arriving and gathering under a group of tamarind trees.”

Mishra estimated around 2,000 villagers who had been asked by the Maoists to congregate for a jan adalat, a people’s court, where they would decide whether Manhas should be released or killed.

“At around 2 pm, they served us fish for lunch,” Kapewar said. “Saini sir is vegetarian so they prepared tomato chutney for him.” Meanwhile, the two or three Maoists present verified the names and details of the delegation.

Soon after, around 70 or 80 armed Maoists arrived, Kapewar said; they had been waiting close by but waited until the verification was done. They were members of the Pamed area committee and were led by its secretary, Manila. “They spoke to us, briefed the villagers in Gondi, and after some time, the jawan was brought.”

Manhas’s hands were tied though the Maoists “untied him immediately” when the delegation asked them to do so. His “eyes welled up”, Kapewar said, and the members of the delegation hugged him.

“He told us he was treated well by the Naxalites,” Kapewar said. He added that the Maoists had found Manhas lying unconscious. They took him into the forest, treated his injuries, and administered two bottles of saline.

The jan adalat then began with villagers talking about the issues they face.

“They said police forces beat innocent villagers, that the security forces torture and loot them when they enter their villages,” Mishra said. Some villagers opposed Manhas’s release which was a “tense” moment, Kapewar said, and the delegation asked Manila, the Maoist commander present at the scene, if she could intervene.

“She explained to the villagers very nicely that the CRPF jawan was a warrior and was caught in the battle,” Kapewar said. “She told them their organisation does not approve of killing a soldier caught in battle. She told them there is no question of harming the jawan.”

Three villagers then voted that Manhas be killed; the rest voted for his release.

The people’s court had spoken. Manhas was handed over at around 3 or 4 pm. “They told us it’s now our responsibility to get him safely to the police authorities and make arrangements to get him home,” Mishra said. The most challenging part, Kapewar said, was travelling the 25-odd km back to Tarrem police station, covering difficult terrain through jungles and hills.

“We were worried about something untoward happening while returning,” he said. “But nothing happened and we got him back safely.”

It was 6.30 pm by the time the delegation reached the police station. “We handed Manhas over to the deputy inspector general of the CRPF, Komal Singh, at Tarrem police station ,” Mishra said.

Manhas being untied by Maoists at the jan adalat.

Yet, no salaries for journalists

Interestingly, this isn’t the first time that Mishra’s been involved in securing the release of captured security personnel. In 2012, when four police personnel of the Chhattisgarh armed force were kidnapped by Maoists in Bhopalpatnam, he helped mediate with Maoists for their return. In 2013, he helped retrieve the body of a Greyhound inspector killed during an encounter in Poovarti. Six months ago, he helped in the handover of a captured Chhattisgarh police officer at a jan adalat in Bijapur.

But while journalists often act as mediators, they face threats from both Maoists and security forces.

“Two months ago, Maoists issued a press release and accused me of supporting corporate houses. They said they will punish me in a jan adalat,” Mishra said. “In 2007, a police superintendent issued a shoot on sight order against me. It happens, it’s part and parcel of reporting in conflict zones.” In the first case, journalists protested the press release and a Maoist central committee later apologised to Mishra for “mistakenly” including his name. In the second, the order was reportedly given because Mishra would often meet Maoists for his work; the police, however, later denied issuing it.

Despite the trials of their jobs, most of these journalists are barely compensated for their reporting; they all act as stringers for various news organisations.

“I currently work as a stringer with a news channel but I don’t get any salary,” said K Shankar, 32, a member of the delegation. “News organisations ask us to commission ads for them and they give us a small percentage of the ad money. That’s it. In fact, most journalists in Bastar do not receive salaries from news organisations.”

He continued: “In order to survive, every journalist in Bastar has a side-business – running a paan stall or a general store – because without money, it’s not possible to survive.” Shankar himself farms to cover his expenses.

Mukesh Chandrakar, 27, another member of the delegation, said: “Ninety-five percent of journalists in Bastar are non-salaried. Because of this pathetic system, some work with authorities, some as contractors – but it is not their fault. They don’t have any options.”

Chandrakar earns between Rs 250 and Rs 2,500 per story, and Rs 2,500 is only if it’s a “special story”. “It’s very challenging to work here in a conflict zone,” he said. “Journalists have been killed in the past” – Sai Reddy in 2013 in Bijapur and Nemichand Jain in Sukma in the same year – “and we get threats from both the police and Maoists. Despite that, we work. But what bothers us is not being paid.”

Kapewar, who works as a stringer for a regional Hindi channel, said, “Instead of giving us salaries, channels themselves demand money from us! On occasions like Republic Day or Independence Day, they ask us to get advertisements worth Rs 1-1.5 lakh. We run from pillar to post to achieve this target. If we don’t, they shout at us. It’s frustrating.” Kapewar, who has a degree in civil engineering, runs an architecture consultancy firm to cover his cost of living.

Mishra said he’s been a journalist since the age of 18, working for organisations like Navbharat and Navduniya. He is currently a stringer for ANI, local daily Prathah India and also writes for an Independent news portal Bhumkal Samachar .

“I have worked with reputed organisations but none of them give me a salary,” he said. Like the others, he was asked to “get ads” for the paper and given 15 percent of the proceeds as commission. “We work in small towns and it’s difficult to get big ads,” he pointed out.

The journalists also lack a safety net for their work. “If a reporter runs into trouble while doing his job, the news organisations disown him and issue a statement saying the reporter was removed from the job,” Mishra said. “It’s a very bad situation and stretches across the whole of Bastar.”

Journalists are even sent legal notices if they fail to collect the advertisement money as directed. On the morning that Mishra set off to secure Manhas’s release, he received a legal notice from a news organisation accusing him of failing to collect ads worth Rs 85,000. He now faces the possibility of legal action.