A recipe to tear down trade unions 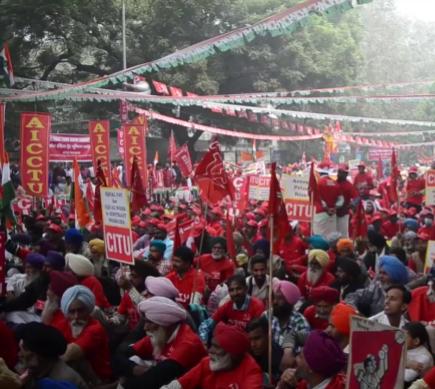 Labour law ‘reform’ has been on the table since 1991 as every government’s favourite solution for economic growth. Yet, there was no consensus between governments, political parties, workers and their trade unions, and employers, on what this meant. Unlike other political formations, the BJP has been in unqualified agreement with employers that the existing labour laws needed to be replaced. During its rule in 1998-2002, the BJP constituted the 2nd National Labour Commission and limited trade union representation in it. The consequent recommendations of the Commission were rejected by trade unions across the country.

This time too, the BJP-led Central government has actively excluded trade unions from pre-legislative consultations on drafting the new labour codes, repealing all existing labour laws and replacing them with four new labour codes. It saw these through Parliament in the absence of the Opposition, whilst ignoring substantive recommendations of the Parliamentary Standing Committee.

The BJP portrayed the now-repealed laws as serving only a small, exclusive section of working people, while claiming that what has now been legislated has a universal reach. This is just political chicanery. What is common to all the four codes is that they dilute workers’ rights in favour of employers’ rights, and together undermine the very idea of workers’ right to association and collective action.

Trade unions first emerged in the 19th century as self-managed organisation of workers in the face of extreme exploitation. They provided, and continue to provide, a collective voice to working people against employers’ exploitative, unfair and often illegal practices.

It is through trade unions that workers have been able to win better wages, fairer employment conditions, and safe and secure workplaces.

In India, workers won the legal right to form trade unions under the colonial rule in 1926, when the Trade Union Act (TUA) was adopted. The law provided a mechanism for the registration of trade unions, from which they derived their rights, and a framework governing their functioning. The TUA also bound workers’ actions within a legal framework by providing for deregistration if a trade union “contravened any provisions of the Act”.

The TUA gave workers the right, through their registered trade union, to take steps to press their claims, and where necessary, as in the case of a malevolent employer, agitate for their claims and advance them before the government and the judiciary. It also provided members (workers) and elected officers of a union a degree of immunity, including against the law on criminal conspiracy. Importantly, the law recognised that actions based on collective decisions by workers were legal and did not constitute criminal conspiracy.

The so-called “simplifying” of labour laws, repealing the TUA, the Industrial Disputes Act, 1947 and the Industrial Employment (Standing Orders) Act, 1946, and creating the Industrial Relations Code (IRC), has a very sinister outcome for workers’ right to association. The code enormously widens the grounds under which a trade union may be deregistered. Under the TUA, deregistration was limited to the internal functioning of a union — in case a union violated the financial rules set down under the law or its own constitution. The Standing Orders Act and the Industrial Disputes Act were concerned with conditions of employment and settlement of disputes respectively. They had nothing to do with the internal functioning, and, therefore, with the existence of a trade union.

Under the new IRC, a trade union can be deregistered for contravention of unspecified provisions of the code. It simply says that deregistration would follow in case of “contravention by the Trade Union of the provisions of this Code”. The possibility of deregistering a trade union in this unspecified manner shifts the balance completely in favour of employers, who continue to enjoy protection under the Companies Act. This violates the principles of equality before the law and of natural justice.

When a trade union is deregistered, it can no longer represent its members (the workers) before the dispute resolution machinery or in court. And, the moment a trade union loses its registration, any collective decision taken by its members and elected officers can be treated as illegal. For example, a decision for strike action would leave employers free to either dismiss striking workers or charge them huge penalties for their claimed losses. It also means that the trade union’s members and elected officers lose their immunity from prosecution for criminal conspiracy for collective decisions and actions, which is exactly what the TUA protected them against. The new code has cut and pasted from the TUA the provisions granting immunity against charges of conspiracy, but this is meaningless if the trade union itself is deregistered. The new code appears to be designed to deter collective action by workers’ unions, and make them fearful of getting trapped in the cross hairs of the new, supposedly “simplified” code.

With the threat of deregistration ever-present, workers and their unions will be pushed to create extra-legal formations like ‘struggle committees’ and ‘workers’ fronts, such as existed before the TUA, in order to advance their demands against unreasonable employers. This would have two outcomes: first, it will push employment dispute resolution outside the legal framework, which, in turn, will lead to the second, even more damaging outcome, which is criminalising working class dissent, since workers’ agitations will have to take place through extra-legal formations. The freewheeling provision for trade union deregistration in the IRC, apart from being an attack on a century-old universal right is, very importantly, also the withdrawal of an absolute right. Once a trade union is deregistered or is effectively silenced by a constant and amorphous threat of deregistration, workers effectively lose their fundamental right to freedom of association.

This has grave implications for the working class’s ability to defend its rights at a time when it is up against a capitalist class whose greed is insatiable, a vengeful government, and a capricious judiciary. Undermining trade unions, as the new code does, bodes ill for democratic rights in this country.

The author is general secretary of the New Trade Union Initiative