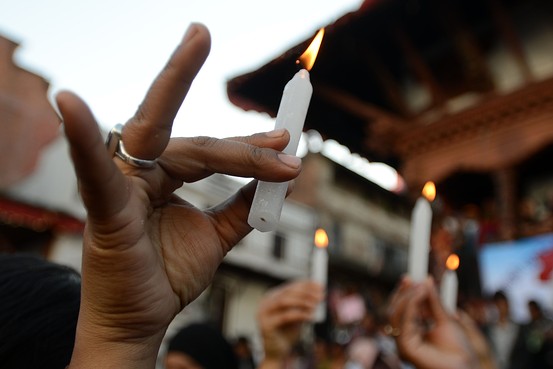 Nepalese activists hold burning candles as they demand justice for a six-year-old rape victim during a protest in Kathmandu on March 11, 2015.

The alleged rape and murder of a six-year-old child has roiled a small district in southern Nepal as hundreds of protesters took to the street demanding death penalty for the accused, refusing to cremate the body until government meets their demands.

Protesters have put the body on the road for five days near the government offices of Bara district in the town of Kalaiya, in an ice-box, chanting slogans against the administration and calling for greater protection for women and children. Local residents and police clashed on Thursday during the protest.

The six-year-old child of a day laborer went missing the evening of February 20; she was found injured the following morning in a local garbage dump, according to Lokendra Bahadur Malla, the chief police officer for the district. Medical examination indicated that rape had occurred, he said.

The police arrested a 28-year-old local man few days later, according police. He remains in custody and doesn’t have legal representation, according to police, who declined to allow contact with him or to provide contact information for relatives.

The girl was airlifted to a hospital in Kathmandu, national capital, a few days later after undergoing treatment at a local hospital. She died March 8.

Pramod Gupta, the protest coordinator, said the government hasn’t sufficiently addressed the issue of safety of women and children. He said that, apart from the death penalty for the accused, the protesters would like to see compensation for the girl’s family and the punishment of people who committed similar crimes in the past.

“We have taken the demands seriously and are addressing them,” said Bal Krishna Panthi, head district administrator. He also pointed out that Nepal is at the forefront of the global campaign for abolishing the death penalty for all types of crimes.

Data on crimes against women and children in Nepal are limited. In the fiscal year ending July 15, there were 912 reported incidents of rape, a considerable increase from 677 in the previous year, according to Nepal Police.