A Story of Displacement in Gujarat Comes to Mumbai #mustsee 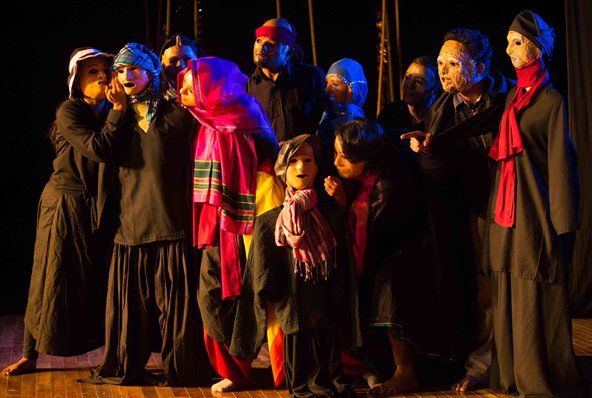 Yadavan ChandranPerformers during the Vikram Sarabhai International Arts Festival in Ahmedabad, India, before its reprise in Mumbai.

AHMEDABAD, India — When the noted Indian classical dancer Mrinalini Sarabhai and her husband, Vikram, founded the Darpana Academy of Performing Arts in 1949, the couple took care to avoid displacing any of the residents who lived next to their property on the western banks of the Sabarmati River in this city.

At the time, most of Ahmedabad’s residents lived on the opposite side of the river, in and around the walled city built by Ahmedabad’s founder, Ahmed Shah, in 1411. Gradually the population of Ahmedabad began shifting westward, as the mills that made Ahmedabad famous as the “Manchester of the East” closed and families began searching for income in other parts of the city.

Last week, the Sarabhais’ 59-year-old daughter, Mallika, a renowned dancer who now runs the academy, stood on the sprawling grass lawn outside the house her father built and pointed to a construction site a few hundred feet away. “There used to be thousands of people who lived right there by the river, but today they almost are all gone,” Ms. Sarabhai said.

It was the disappearance of these people that inspired Ms. Sarabhai, a recipient of the Padma Bhushan, India’s third-highest civilian award, to create a work in their honor.

For the past 38 years, the Darpana Academy has hosted the Vikram Sarabhai International Arts Festival, and when it came time to plan this year’s theme, Ms. Sarabhai knew right away what it would be. “I wanted to pay tribute to the river residents in Ahmedabad, but I also wanted to broaden the theme to include all different types of displacement,” she said.

The three-day festival, which was first presented in Ahmedabad in December, will be reprised at Mumbai’s Nehru Center Auditorium starting Wednesday, sponsored by the Bajaj Group and the Office of the United Nations High Commissioner for Refugees. 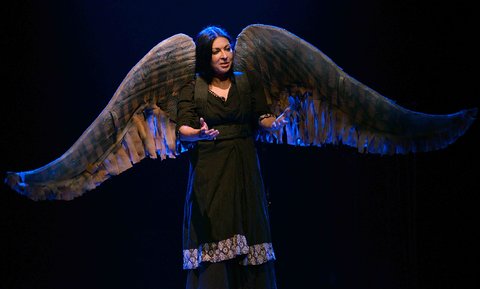 Yadavan ChandranMallika Sarabhai, the head of a performing arts academy, addressing the audience at the festival in Ahmedabad. She wanted to pay tribute to people forced out of homes along the Sabarmati River.

The festival opens with “LDR,” which Ms. Sarabhai called “an examination of what happens when you are displaced from your lover in a long-distance relationship,” hence the name.

Choreographed by Ms. Sarabhai’s 29-year-old son, Revanta Sarabhai, much of “LDR” is lighthearted and humorous, especially in a scene where a couple struggles to communicate over Skype. Other parts of “LDR” allude to same-sex romance and the challenge of finding acceptance as a homosexual in India.

The second performance, to be held in Mumbai on Thursday, is a play called “Unearthed,” written by the filmmaker Yadavan Chandran, which is loosely based on the short story “A Very Old Man With Enormous Wings,” by the Colombian writer Gabriel García Márquez.

Ms. Sarabhai, who acts in the play, described it as an exploration of how “we displace ourselves from ourselves.”

“We become insecure, we lose who we are, and that allows us to see another person as the ‘other,’ ” she said.

But it is the third night of the festival, on Friday, that is the most personal for Ms. Sarabhai. In “The Damned,” created by the Dutch choreographer Naomi Deira, dancers re-enact what it means to be displaced from one’s home.

Ms. Sarabhai is known for her mastery of two styles: the south Indian dance Kuchipudi, which is usually accompanied by Carnatic music; and Bharata Natyam, a dance form that originated in temples in Tamil Nadu.  But neither of these styles was appropriate to tell the story of displacement, Ms. Deira, 28, said in an interview.

Before the Ahmedabad premiere, she stood off to the side of the stage and held her two hands together by her chest. “In classical Indian dance, keeping control is the main thing. But I wanted to break that because when you fall, you do not fall like this, with your hands still in this position,” Ms. Deira said.

She then flayed her arms around and moved her head in a circle. “When you fall because of displacement, I imagine it is like this—uncontrolled, chaotic, traumatic,” she said.

For Ms. Sarabhai, the challenge with “The Damned” was to make the performance specific to Ahmedabad but also universal. Ms. Sarabhai is a well-known activist who has been an outspoken critic of the Sabarmati Riverfront Project. In 1997, the Ahmedabad Municipal Corporation began developing a six-mile promenade on the banks of the Sabarmati, opening it in 2011.

But critics, including Dr. Mathur, say that the number of displaced could reach 100,000 and that many who have had to flee their homes now live in substandard conditions, while others still await homes.

Both Ms. Deira and Ms. Sarabhai said “The Damned” was about the broader theme of displacement. At the conclusion of the December performance of “The Damned” in Ahmedabad, Ms. Sarabhai stood on the stage with tears in her eyes and held up a sign that read, “65 Million Displaced.” The number referred to all the Indians who have had to leave their homes because of development projects, according to a report released in 2012 by the Working Group on Human Rights in India and the United Nations.

The report said that of these displaced, over 40 percent were tribals and another 40 percent were Dalits, one of the lowest castes, and other rural poor. Not taking into account displacement due to armed and ethnic conflict, India is estimated to have the highest number of people displaced annually as a result of ostensible development projects.

Ms. Sarabhai’s sign was meant to highlight the broader problem of displacement across India, but her words after the premiere in Ahmedabad kept returning to the Sabarmati riverfront.

“I grew up with the river residents, and this three-day festival is inspired by them. They were part of my extended family, and I watched them forced out,” she said.

“If you are middle class in India, you may never experience displacement. It is something you read about. But I wanted people to think about what is happening in this country and, for a night, experience what it is like to be displaced,” Ms. Sarabhai said.