Aadhaar: Searching Database with Fingerprints Not Possible, UIDAI Admits before the Bombay HC 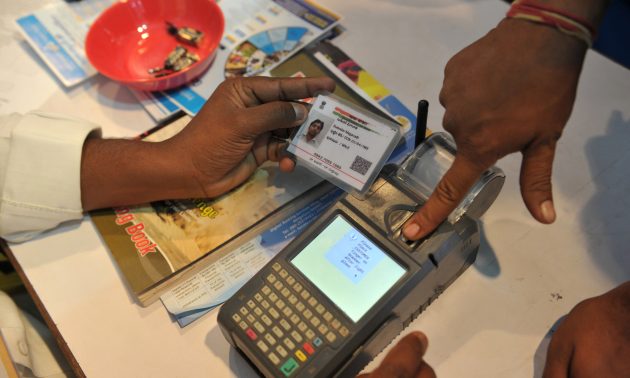 A visitor gives a thumb impression to withdraw money from his bank account with his Aadhaar or Unique Identification (UID) card during an event held to promote digital payment in Hyderabad. Photo: AFP / Noah Seelam

Despite the claims, media stories and myth created about help find missing person by matching fingerprints, the Unique Identification Authority of India (UIDAI), admitted before the Bombay High Court that searching Aadhaar database using latent chance fingerprints is not technologically feasible. This ratifies that Aadhaar is not a magic tool that will put an end to Bollywood’s favourite story line of siblings lost and separated on trains, or fairs or parted from their parents, because a quick scan in an Aadhaar database will find anybody, anywhere!
Get Moneylife’s
Top Stories by Email
In an order issued on 12 October 2018, Justice VK Jadhav from the Aurangabad bench of Bombay High Court, noted, “It has been specifically explained that the UIDAI does not collect biometric information i.e. based on technologies, standards or procedures suitable for forensic purposes. Thus, the matching of the finger prints without mentioning Aadhaar card is not feasible and even the system cannot respond to it.”
The case is related to identifying a dead woman whose body was found at Daulatabad in Aurangabad district. Since the investigating officer (IO) could not identify the dead woman, he filed an application before the District and Session Court seeking permission to compare fingerprints in Aadhaar database. UIDAI’s deputy directed filed his reply, after which the Additional Sessions Judge dismissed the petition.
The investigating officer then decided to approach the high court. VM Kagne, counsel for the IO, submitted that the application filed by the IO is not any adversarial litigation against Aadhaar or UIDAI. “IO is seeking help of the Aadhaar authorities to establish the identity of a dead body of a woman. Nobody has come forward to identify the dead body of the deceased and as such, the IO is helpless to find out any way to identify the deceased woman,” he said.
Bhalchandra Jichkar, deputy director of UIDAI, submitted that it is not at all possible compare the fingerprints with the information stored. BB Kulkarni, counsel for UIDAI, informed the court that, at present ,in all, there are more than 1.22 billion Aadhaar cardholders in the country and technological architecture of UIDAI does not allow matching of the fingerprints without mentioning Aadhaar number.
Mr Jichkar contended that “…the technological architecture of the respondent does not allow for any instance of 1:N matching (wherein fingers print, including latent and chance fingerprints are matched against the other fingerprints in the respondent’s database), except for generation of Aadhaar number where the biometric information has been collected in accordance with the technically laid down procedures. Further, it is reiterated that, the respondent does not collect biometric information, i.e. iris scan and fingerprints, based on technologies, standards or procedures suitable for forensic purposes. Therefore, searching the Aadhaar database using latent chance finger prints, which may be called as 1:N matching, it may not be technologically feasible.”

The HC then dismissed the application filed by the IO.
Finding missing persons by using fingerprints is a hoax created by ‘vested interests’ through media propaganda. The biometrics in the Aadhaar apparently help the authorities re-unite lost family members. Unfortunately, it is simply not possible for UIDAI to match fingerprints of anyone with other members of the person’s family.
Sometimes, Aadhaar holders even face difficulties in matching own fingerprints.
Here are some facts. The UIDAI, which has tagged Indian residents with a number, has repeatedly told the courts that it can only provide a ‘Yes’ or ‘No’ answer to any query on Aadhaar. It also stated that all biometrics and demographic information of Aadhaar holders is never shared with anyone. UIDAI even went up to the Supreme Court to oppose efforts by the Central Bureau of Investigation (CBI) to seek access to its biometric database for investigation in a criminal case.
Under these circumstances, how can anyone claim that a ‘lost’ person was united with his/her family by using Aadhaar?
Biometrics do not provide demographic details, so how is this possible? There are three big holes in this propaganda. One, biometrics of a person keep changing every three years. So a perfect match can only happen if the person is recently lost and not in case of long lost persons. Forget about persons missing for years, the biometric authentication of UIDAI’s chief executive Ajay Bhushan Pandey also failed, as per his submission to the Supreme Court in the Aadhaar hearings.
Documents submitted before the five-judge Constitutional Bench list the attempts at Aadhaar authentication by Mr Pandey. There was only one attempt out of 26 attempts to use biometric authentication. And that failed!
https://www.moneylife.in/article/aadhaar-searching-database-with-fingerprints-not-possible-uidai-admits-before-the-bombay-hc/55659.html

Do you know Famous Patriotic Slogans were Given By Muslims of India ?
Two Supreme Courts With Two Very Different Ideas of Gay Rights #LGBT
U.P -Woman Killed For Objecting To Co-Passenger Smoking In Train #WTFnews
Puttakota Killing Of Adivasi Farmers By Greyhounds Police