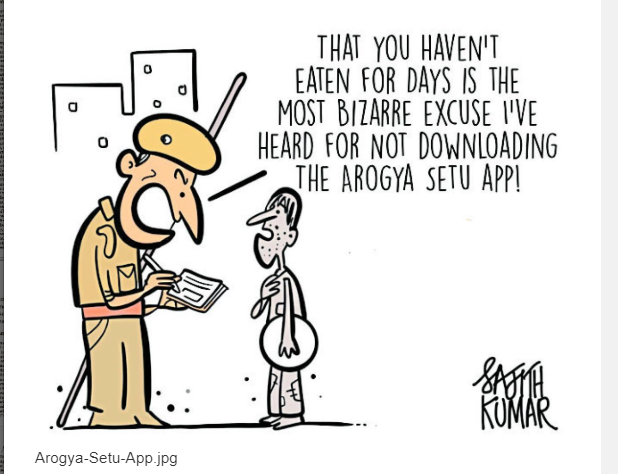 On 2 April, 2020, Government of India launched a mobile app developed in public-private partnership (PPP) to bring the people of India together in a resolute fight against COVID-19. Amidst national security concerns, so far some 5 crore people have downloaded it. In the absence of the promised personal privacy andv data protection law, such apps do not inspire confidence.
According to the government, this App, called ‘AarogyaSetu’ enables people to assess themselves the risk for their catching the Corona Virus infection. It calculates this based on their interaction with others, using cutting edge Bluetooth technology, algorithms and artificial intelligence.

Unless there is transparency about this PPP app., its background ans its beneficial owners and unless Parliamentary Standing Committee on Information Technology examines the national security and privacy consequences of this app and approved its use, there appears to be compelling logic against it’s use.
As per government, “once installed in a smart phone through an easy and user-friendly process, the app detects other devices with AarogyaSetu installed that come in the proximity of that phone. The app can then calculate the risk of infection based on sophisticated parameters if any of these contacts is testedpositive. The App will help the Government take necessary timely steps for assessing risk of spread of COVID-19 infection, and ensuring isolation where required.”

Prior to this biometric Unique Identification (UID)/Aadhaar scheme too had insincerely claimed that it will facilitate the delivery of basic health services. The allocation of less than 1.5 per cent of the gross domestic product (GDP) for health makes India as a country which has one of the lowest public expenditure on health in the world. According to World Health Organization (WHO), India ranks 184th out of 191 countries in terms of GDP% spent on health case. It means on an average India spends Rs 6044 per person per year. The decline in public investments over the years is happening along with growing subsidies to the private sector in health care in a myriad ways. As a consequence, India has the largest, and the least regulated, private health care industry. Access to health care has been on sharp decline. The policy of levying user fees has impacted negatively on access to public health facilities, particularly for the poor and the marginalised communities and women. Instead of addressing these fiscal needs, government seems to be misleading people by promoting applications like Aarogya Setu and UID/Aadhaar.

Can such apps be a substitute for poor public financing for health? India has one of the highest private medical expenditures in the world: out-of-pocket expenditure accounts for 83 per cent of the total health expenditure in the country.

Government itself has admitted that medical expenditure has emerged as one of the leading causes of indebtedness. At the same time, the proportion of people not availing themselves of any type of medical care for financial reasons has increased in both urban and rural areas. Some 20-25  per cent do avail of any type of medical care for this reason. Will Aarogya Setu like applications be of any help to them?

It may be recalled that a Working Paper on Public Health published by Unique Identification Authority of India (UIDAI) noted that the UID/Aadhaar application will help create demand for public health.  There is a huge unmet demand for supply of quality comprehensive health services amidst covid19 crisis. How does Aarogya Setu help with that?

The UIDAI’s Working Paper on public health had referred to what it called the killer application to provide citizens an incentive to obtain a UID/Aadhaar in order to meet health needs. Some 10 years of UID/Aadhaar shows that such claims are bogus. Such insincere claims are made only to promote new apps.

UIDAI’s Working Paper had highlighted lack of good-quality health data and vital statistics. UIDAI failed to rectify this because reliable health data comes from routine health check ups, not from IT applications. Most Indians fail to get quality health care. If they will get quality care, data quality will improve. Neither UID/Aadhaar nor Aarogya Setu are magic bullets. Notably, this paper seems to have disappeared from UIDAI’s website.

Likewise, it is apparent that  AarogyaSetu is not designed to meet the public health challenges in the face of covid19. Aarogya setu has the unique potential of increasing stigma by breaching the anonymity of health data collected. It use constitutes gross violations of health rights including patients’ right to confidentiality.

App developers seem to be using covid19 disaster as a killer opportunity for their apps.

AarogyaSetu like apps has the potential to cause further marginalization of already marginalized groups. Instead of adopting universal health care model, government has been misled to undertake experiments for app based covid19 health care model. In times of pandemic, using humans as guinea pigs for such experiments is unethical.

Any proposal of making AarogyaSetu a condition for health care of present and potential covid19 patients constitutes denial of right to life and right to health.
Aarogya Setu seems legitimize  clinical trials for the app. A government which had opened India as a market for clinical trials of apps and drugs cannot be trusted.

It emerges that AarogyaSetu based covid19 surveillance has little to offer for improvement in the public health situation in the country.  Is it legitimate to create artificial demand for such applications?
If Aarogya Setu is supposedly the answer, there a compelling logic in finding out what is the question it set out to answer. A White Paper on Aarogya Setu revealing the chronology of its development, the identity of developers, potential for misuse of data, trans border flow of data, health rights violations and breach of confidentiality of health information and analysis of the costs and risks of the app is a must before citizens can give their consent. Till than resistance of some sovereign citizens appears legitimate. Although belated several of the concerns expressed by citizens in the matter of UID/Aadhaar has been endorsed by the Supreme Court. The struggle for redressal of other concerns is continuing. Such schemes and related apps promote digital casteism, discredited eugenic thinking, technological determinism. This contaminates social policies which increasingly begin to ignore social determinants of health. Gnawing concerns regarding Aarogya Setu is inherently linked to misgivings regarding unique identifers.

RTI Is A Pillar Of Democracy. Save It!
The NDTV case against Nielsen and Kantar has raised questions about TV ratings- The "Raddi Business"
SC Aadhaar Hearing-Aadhaar represents a complete breakdown of trust as it presumes if you don't have...
7 women petition Times of India, accuse Hyd editor KR Sreenivas of sexual harassment #MeToo