On July 16, 1945 the United States government detonated the first atomic device in the test named Trinity. Less than one month after the Trinity test, the United States dropped two atomic bombs – on the cities of Hiroshima and Nagasaki – that killed over 100,000 people in less time than it took to type a few of these words. As many as 220,000 were dead from the effects of radiation by the end of 1945. Even today, 64 years later, survivors and subsequent generations suffer the effects of radiation.

On August 24, 1949, the Soviet Union conducted its first nuclear test at the Semipalatinsk test site in modern-day Kazakhstan. So too, in the land around Semipalatinsk, have generations of people been horribly affected by radiation exposure resulting from some 450 nuclear tests conducted there. 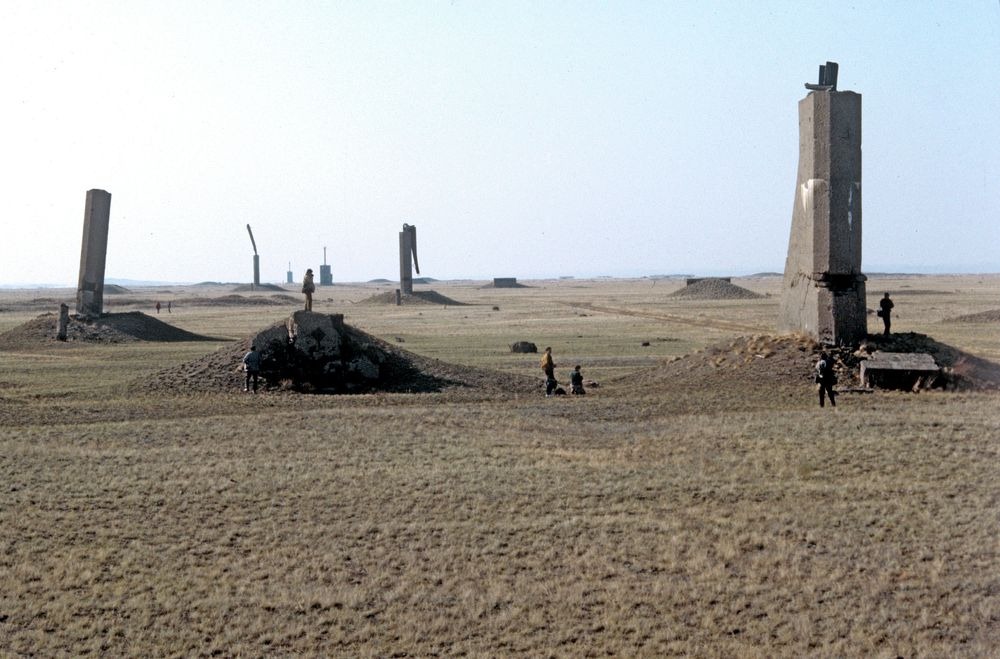 So began a long journey (and nuclear arms race) that has led humanity down the perilous road of preparation for its own destruction. Scientists have continued to seek the power of gods, creating ever more destructive nuclear devices over the years, and military planners have continued asking for more of these awful weapons in every shape and form (and method of delivery).

The nuclear-armed nations have conducted a total of 2054 nuclear tests at dozens of test sites around the world, most of them located on lands occupied by indigenous peoples (in what has been called “nuclear colonialism”). Many tests were conducted above ground, resulting in radioactive fallout contaminating surrounding areas and affecting the people living there. Many underground tests also vented radioactive material into the air.

Yet even as governments pushed forward with their nuclear weapons programs, people pushed back against nuclear weapons and nuclear testing, even in the early days of the Cold War.

In 1958 a crew of anti nuclear weapons activists set sail on a boat named the Golden Rule; their destination was the U.S nuclear test zone in the Marshall Islands; their goal was to stop the government’s atmospheric nuclear testing. Although the Golden Rule‘s crew was arrested, tried and jailed, its example of nonviolent direct action inspired many who followed, and helped pave the way for the Limited Nuclear Test Ban Treaty of 1963.

In Kazakhstan a mass civil society movement that began in 1989, led by poet Olzhas Suleimenov and current President of Kazakhstan, Nursultan Nazarbayev, ultimately led to the closure and decommissioning of the Semipalatinsk test site. President Nazarbayev signed the decree closing Semipalatinsk on August 29, 1991.

The Golden Rule sails again, this time as an emissary of Veterans for Peace, sailing for an end to war and nuclear weapons. I was on board the Golden Rule on August 9, 2016, the anniversary of the atomic bombing of Nagasaki, when she led a peace flotilla sailing past Naval Base Kitsap-Bangor on Washington State’s Hood Canal. Bangor is the West Coast home port of eight of the the U.S. Navy’s fourteen OHIO Class (Trident) ballistic missile submarines. A collaboration with Ground Zero Center for Nonviolent Action, the flotilla’s purpose was a water-based nonviolent protest and witness for peace and an end to the threat of nuclear war.

Located just 20 miles west of Seattle, Bangor represents the largest concentration of deployed nuclear weapons in the U.S. More than 1,300 nuclear warheads are deployed on Trident D-5 missiles on SSBN submarines based at Bangor or stored at Strategic Weapons Facility Pacific (SWFPAC) at Bangor. 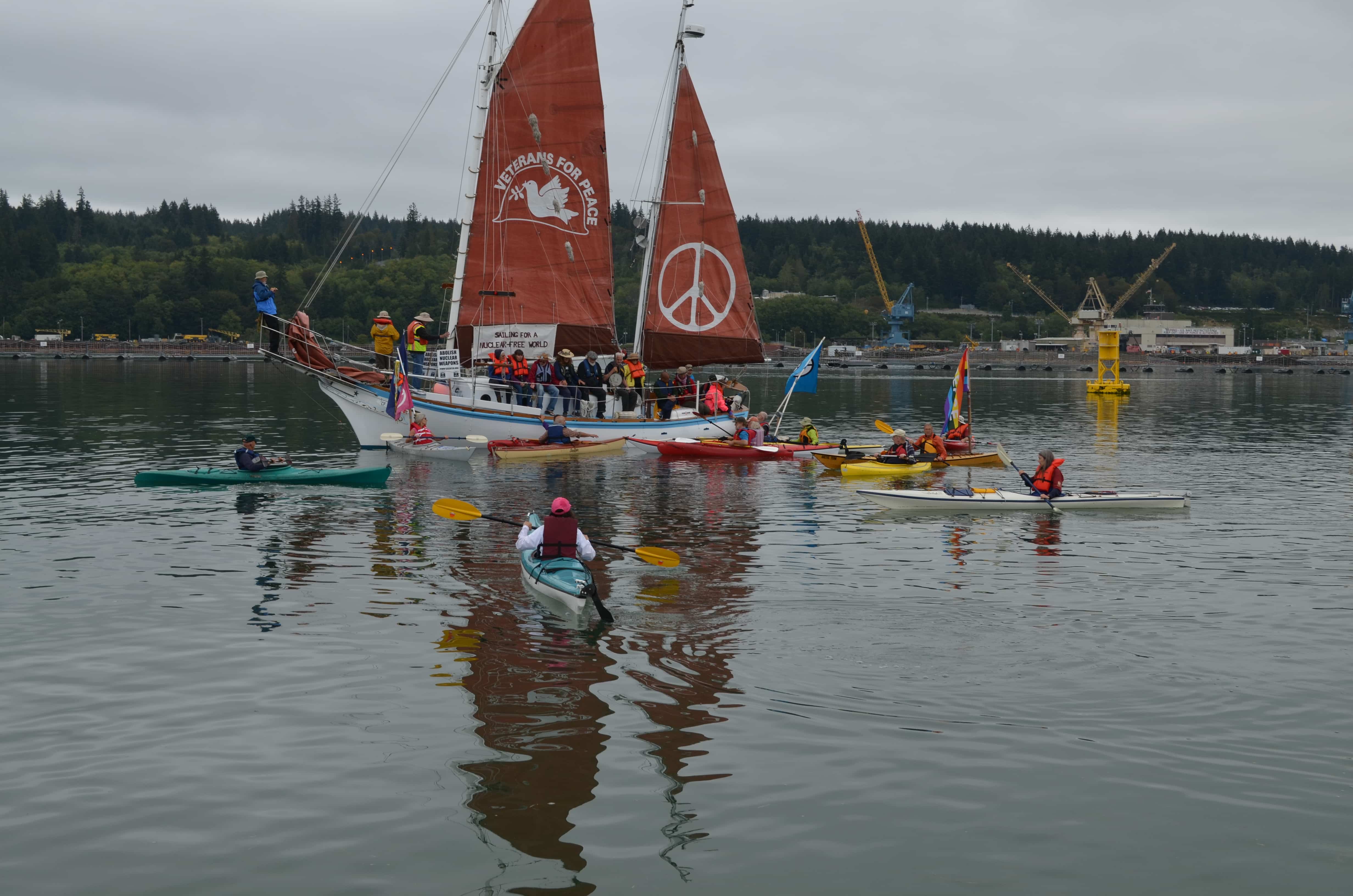 The Golden Rule on August 9th, with a Trident submarine visible at the Delta Pier (beyond the yellow buoy).

As we sailed past the base and the Trident submarine (with some missile hatches open) being serviced at the pier, I thought about the Navy’s ongoing testing of the Trident missiles. Although the tests do not involve nuclear detonations, they do involve launching missiles (loaded with dummy warheads) from submerged submarines to a test site in the Marshall Islands. This is essentially a test to ensure that the missiles will function as intended in a nuclear war.

I also found myself thinking ahead to August 29th, which is not only the historic day on which the Semipalatinsk test site was closed, but also the United Nations International Day Against Nuclear Tests. It was under Kazakhstan President Nursultan Nazarbayev’s initiative that the UN proclaimed the annual August 29th commemoration.

Kazakhstan is preparing to host a major international commemoration and conference in Astana on August 29th, co-organised by Parliamentarians for Nuclear Non-Proliferation and Disarmament. The conference will gather leading parliamentarians, prominent politicians, diplomats and disarmament experts, as well as religious leaders and civil society representatives from around the world to discuss further steps needed to make meaningful advances towards global nuclear nonproliferation and disarmament.

The conference is being held at a time when the nuclear-armed nations are rapidly modernizing their arsenals, while North Korea continues to pursue its own arsenal. The U.S. alone currently plans to spend an estimated $1 trillion dollars over 30 years for rebuilding the nation’s nuclear facilities and modernizing nuclear weapons. The New York Times reported that the U. S., Russia and China are aggressively pursuing a new generation of smaller and less destructive nuclear weapons. The buildups threaten to revive a Cold War-era arms race and increase the probability of nuclear war.

On May 27, 2016, President Obama spoke in Hiroshima and called for an end to nuclear weapons. He said that the nuclear powers “…must have the courage to escape the logic of fear, and pursue a world without them.” Obama added, “We must change our mindset about war itself.” 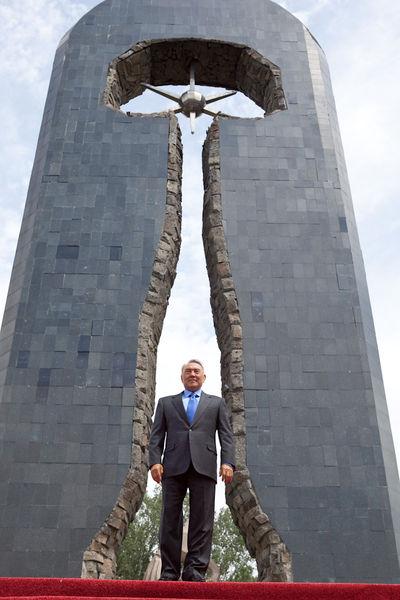 President Nursultan Nazarbayev at a memorial to the victims of nuclear testing in the town of Semey, formerly Semipalatinsk.

As for Kazakhstan, President Nazarbayev long ago moved beyond rhetoric and showed real courage, not only when he closed Semipalatinsk, but also when he returned all of the nuclear weapons Kazakhstan inherited subsequent to its independence to Russia; Kazakhstan was, at that time, the fourth largest nuclear state in the world.

President Nazarbayev continues to demonstrate both courage and vision on the eve of this historic conference that will take place in a nation whose people have suffered greatly from the nuclear madness that has threatened the world since that first test in 1945.

The Astana conference, Building a Nuclear Weapon-Free World, is expected to call for new actions, such as a UN Security Council resolution prohibiting all nuclear tests, the establishment of nuclear weapons free zones in North East Asia and the Middle East, agreement by nuclear-armed States to no first use, and the commencement of United Nations-led negotiations in 2017 to prohibit nuclear weapons globally.

As we prepare for this historic conference, an exerpt from the preface to Epicenter Of Peace, written by President Nazarbayev, seems appropriate: “As a weapon it cannot be easily directed and aimed as the target is yourself, the life and culture of modern humanity. You cannot look into the human dimension of the military atom because there is nothing there but pure evil. Nuclear weaponry cannot be trusted because in the name of freedom it offers not friendship but slavery. What benefit can be gained from the nuclear trust? When will humanity truly move beyond the last stages of the Cold War and regain faith in itself?”

Perhaps when we learn to follow the Golden Rule.

Jago Modi Jago - The Farmer Has Bypassed Delhi
CBI wanted to arrest Narendra Modi, Amit Shah in Ishrat Jahan case: Ex-DIG Vanzara
Modi might be the only world leader whose Twitter use is more problematic than Trump’s
Koodankulam: Statement of Justice A P Shah