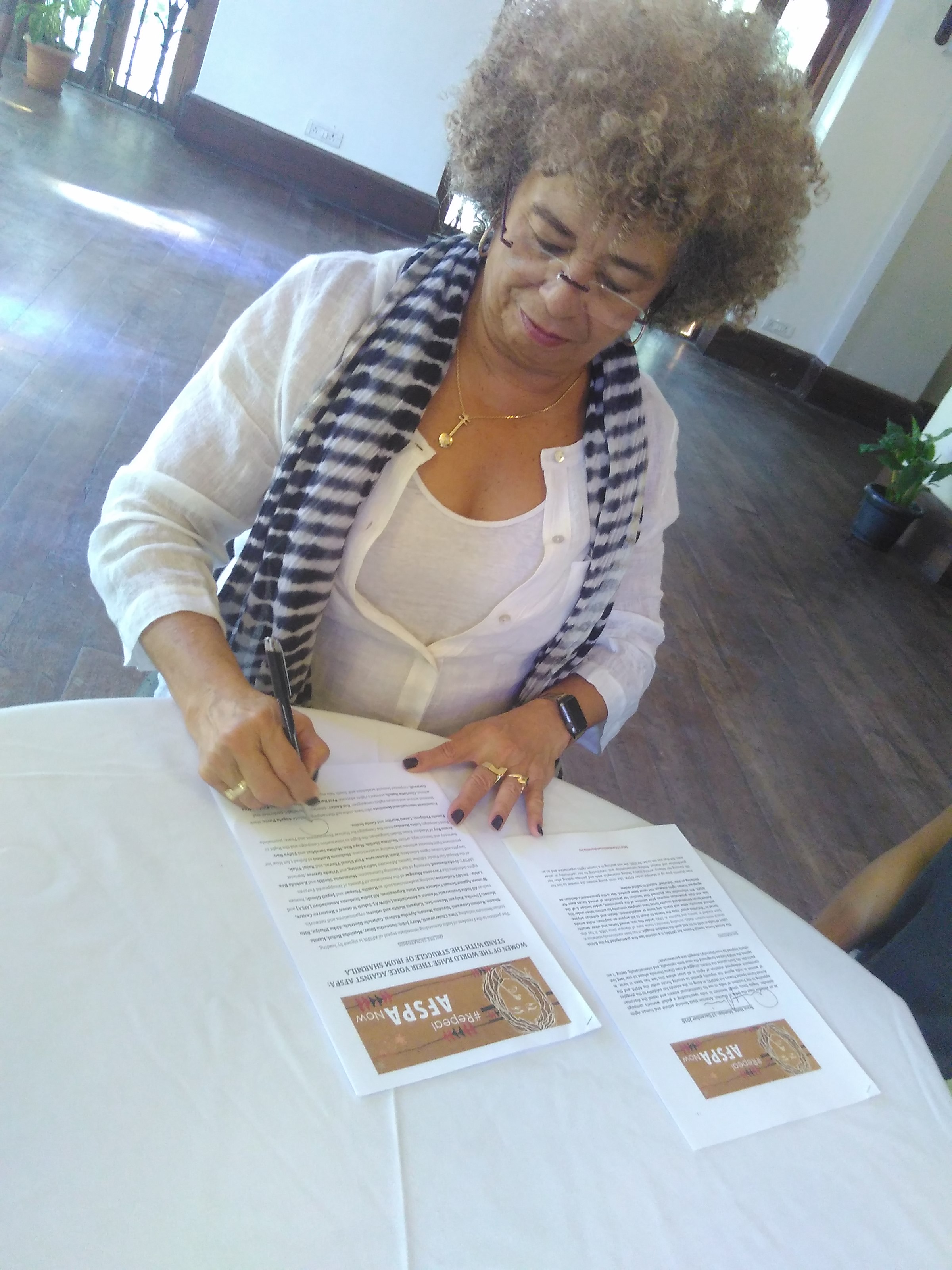 At an exclusive meet-the-press in Mumbai, American black feminist activist and human rights defender, Angela Davis joined feminists in India spearheading a global women’s campaign appealing to the President of India to use his Constitutional powers and repeal the draconian Armed Forces Special Powers Act (AFSPA). In doing so, she extends her solidarity to the struggles of women in India against the impunity granted to security forces under the AFSPA and the consequent widespread violation of rights in all areas where this law has been in force. In particular, Ms Davis salutes the historic struggle of Irom Chanu Sharmila whose 16 year long fast against the AFSPA helped foreground the issue both nationally, and internationally, saying

The Armed Forces Special Powers Act (AFSPA) is a colonial law first promulgated by the British rulers of India in 1942 to try and quell the freedom struggle. It has been continuously operative in several north-eastern states, including Sharmila’s home state of Manipur since 1958. It has also been invoked in Jammu and Kashmir in 1990. Under this law, armed forces and other security forces in “disturbed areas” have the license to shoot to kill anyone on suspicion; make arrests without warrants; enter and search any home or establishment; detain and question anyone. Armed forces personnel and security forces have complete immunity for actions taken under this law, and their prosecution requires prior sanction of the government, under Section 6 of the AFSPA. RTI information has disclosed that Sanction for prosecution of armed forces even for egregious human rights violation has never been granted. Nor is the government’s decision on declaring an area “disturbed” subject to judicial review.

Irom Sharmila grew up in Manipur under AFSPA. Like most young women she wanted to live her life pursuing her dreams: writing poetry, finding meaningful work and perhaps looking after her grandmother and mother, finding companionship and contributing to her community in other ways. But that was not to be. By 2000, she was working in a human rights organisation and as an interpreter at a public tribunal on human rights violations she heard many testimonies of disappearances, fake encounters and sexual violence. She was deeply disturbed by these accounts. Then on 2 November 2000, ten unarmed people waiting for a bus in Malom, a small town in Manipur, were gunned down by a paramilitary patrol on the rampage after a bomb blast near their camp earlier that day. The victims – who included a 60 year old woman and three teenagers – had nothing to do with the blast: they were ordinary citizens going about their daily lives. An explosion of shock and outrage engulfed Manipur. Sharmila, a young poet and activist who describes herself as “an ordinary woman”, acted with extraordinary personal and political courage: she resolved not to eat or drink until AFSPA was struck down. During the 16 years that followed the Malom incident and the hunger strike she undertook the state force-fed her and kept her alive but also incarcerated her in a hospital ward that permitted no one to visit her. After repeated attempts to move the government authorities and failing to have her voice heard, on 9 August 2016, Sharmila decided to change her strategy and find other ways to keep the struggle against the AFSPA going.

In the years that have passed since the Malom massacre, there have been thousands of similar atrocities. In Manipur alone, 8,000 civilians have been killed since 1980, many of them shot in cold blood in full public view for “acting suspicious” or “looking like a militant”.  Human rights groups have documented hundreds of cases of abduction and torture of young men, violent deaths in custody and execution-style shootings of captured militants in staged encounters.  The chronicle of violence against women under AFSPA includes the mass rapes of more than 100 women in Kunan Poshpora, Kashmir in 1991; the abduction, rape, torture and murder of Thangjam Manorama by a search party of soldiers in Manipur in 2004; the abduction, rape and murder of two young women in Shopian, Kashmir in 2004; the sexual assaults and rapes of women in Karbi Anglong, Assam in 2015. Not a single soldier has been brought to book for any of these incidents.

Opposition to AFSPA is growing. It has been criticised as anti-people and anti-democratic by human rights groups and civil society organisations inside and outside the country. It has been repeatedly challenged in the Supreme Court. The legislature in Kashmir has voted against it. In the north eastern state of Tripura, the council of ministers has decided that it is unnecessary and should be withdrawn. Indeed, AFSPA has proved to be an ineffective weapon against separatism and militancy, turning civilian populations against the government and undermining the search for political solutions.

Even among citizens, Sharmila is not the only one who has consistently demonstrated her resistance to  the AFSPA: there is a long history of struggle against the AFSPA by ordinary people in all the areas where the Act has been imposed. Women directly affected by the impunity spawned by this “lawless law” that has been on the statute books since 1958 have come on to the streets repeatedly to demand justice for the women and girls who have been assaulted, raped and murdered in custody wherever AFSPA has been in force. In 2004, a group of Meira Paibis the famous torch-bearing mothers of Manipur, stripped naked and stood in front of the then army headquarters at Kangla Fort, holding a banner saying “Indian Army, Rape Us”, turning the very bodies of women that are targeted, into a powerful symbol of protest. Yet the State remained unmoved.

In a historic judgement on 8 July 2016 regarding 1528 encounter deaths in Manipur that has been under  AFSPA for about 60 years, the Supreme Court of India declared ‘indefinite AFSPA’ a mockery of democratic processes. Over the years, the Justice Jeevan Reddy Committee; Christof Heynes,  UN Special Rapporteur on Extrajudicial, Summary or Arbitrary Executions; Rashida Manjoo,  UN Special Rapporteur on the Causes and Consequences of Violence Against Women, Margaret Sekaggya, UN Special Rapporteur on Situation of Human Rights Defenders; the UN CEDAW Committee; former NHRC member, Satyabrata Pal; the Working Group on Human Rights in India and the UN (WGHR); global human rights bodies and civil society organisations have consistently called for a repeal of AFSPA and an end to immunity for crimes committed under its shadow.

Speaking at an event in Delhi soon after she came out of her forced isolation a few months ago, Sharmila reflected on her struggle and shared her despair at the refusal of successive  governments to recognise her fast as a political act of satyagraha. She said that her decision to  end her fast has freed her from the forced isolation she has been subjected to all these years, and allowed her to take her protest into the larger public arena and link her struggle with that of others. She reiterated her simple question: How can a country that prides itself on being the world’s largest democracy continue to implement a law that violates every tenet of democracy?

Sharmila said that she would like to put this question directly to the President of India. She has sought an appointment with the President, to hand over the campaign appeal and signatures in support, and urge him to act to repeal AFSPA.

In supporting and widening the campaign against the AFSPA women’s rights activists, eminent feminist historian Uma Chakravarti has said “No one should be above the law, no acts of the state should be above judicial scrutinyand no woman in any part of the country should be denied the right to justice which the Constitution of India grants to her. That’s why we stand for the repeal of AFSPA and are taking the global women’s campaign to the President.” As Vrinda Grover, human rights lawyer and feminist, has asserted, “The prolonged application of AFSPA has not only institutionalized militarism and a climate of impunity but has also alienated the public and fuelled a cycle of violence, increasing insurgency rather than dampening it.”

WOMEN OF THE WORLD STAND WITH SHARMILA TO REPEAL AFSPA

Together, we urge the President of India to respond to this international call for justice, peace and accountability.

WOMEN OF THE WORLD RAISE THEIR VOICE AGAINST AFSPA; STAND WITH THE STRUGGLE OF IROM SHARMILA

Hundreds of academicians, students, media persons, lawyers, development professionals and activists and concerned citizens have sent signed postcards and posters from West Bengal, Karnataka, Maharashtra, Kerala and other states all across India to the President to stand up and assert our Constitutional rights to life and liberty that are consistently violated under the AFSPA.

Well over fifteen hundred voices that speak out loud and clear against AFSPA.

Only one question remains: will the President of India listen?