Activist Srikanta Nayak sitting outside the SCB College and Hospital in Cuttack after having forcibly brought there from Kendrapara. Photo: Tejeswar Parida

The Odisha government has filed 1,000 cases and arrested 24 people who ransacked a project to divert water from the Kharosotra river

An environmental activist, on hunger strike since August 10, 2021 to protest a proposal to divert water from the river Kharosotra in Odisha’s Kendrapara district, was dumped outside a Cuttack hospital August 25. Srikanta Nayak is currently in the intensive care unit (ICU), sources have told Down To Earth (DTE).

When DTE called his mobile phone, someone else answered and said Nayak had been admitted at 10 am August 26 in the ICU at Srirama Chandra Bhanja (SCB) Medical College and Hospital in Cuttack.

Tejeswar Parida, the chairman and founder of the Centre for Policy, Governance and Advocacy and Yuva Odisha Foundation, confirmed this to DTE:

I had met him at the Kendrapara district headquarters hospital August 25 morning. In the late evening, he was forcibly sent to the SCB Medical College and Hospital in Cuttack. There was no bed available and the hospital was crowded. In protest, he came out and slept under a tree. Last heard, he was in the medical ward of the hospital August 26.

Nayak, 45, had launched a protest August 10 near the statue of Mahatma Gandhi at Kendrapara.

The Rs 754-crore mega drinking project is backed by the state government. It envisages diverting water from the Kharosotra in Kendrapara district to 0.5 million people in neighbouring Bhadrak district.

The would-be beneficiaries of the project live in 91 Gram Panchayats across four blocks in Bhadrak. The water is being diverted for drinking purposes.

But locals claimed the project will destroy agriculture in 220 villages on the river as it will dry up. Some 0.4 million people live in these villages spread across the Aul and Rajkanika blocks of Kendrapara.

Nayak is part of a local non-profit called Sambhabana, which is part of the movement against the project.

He was removed by officials from his protest site August 15 and shifted to the district headquarters hospital as his condition deteriorated. But he refused to take any food and continued the hunger strike.

“Diversion of water from an already deficient river basin which would lead to the ingress of seawater upstream and injure the district’s agricultural activities. The riverside villagers will become more vulnerable to salinity intrusion due to diversion of sweet water from the river for this mega drinking water project,” Singh said. 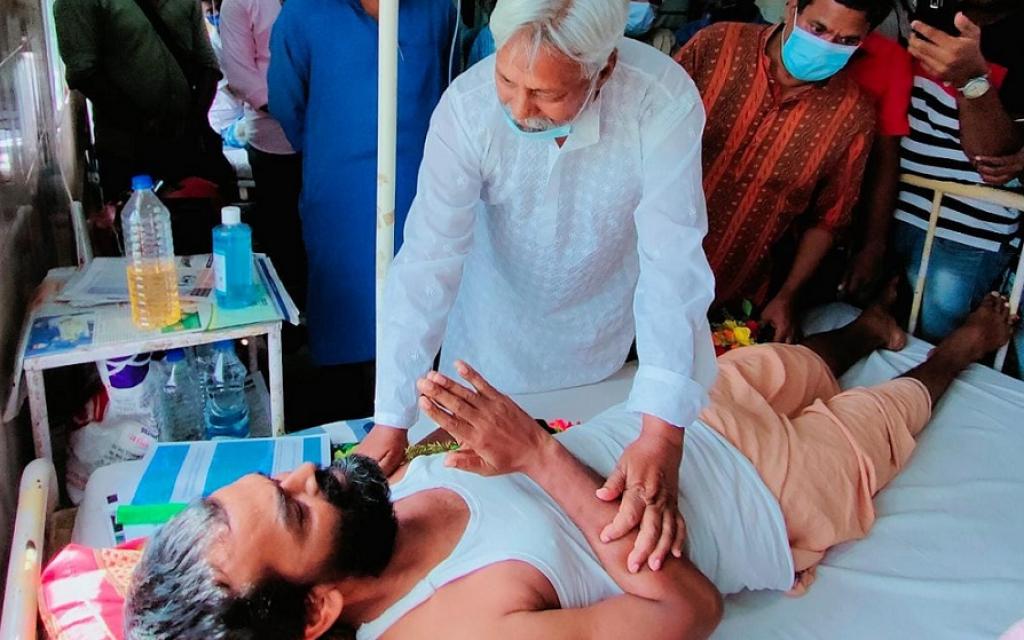 A large number of residents from villages on the banks of the Kharosotra river violated prohibitory orders and marched to the project site at Bharigada village August 12.

They damaged several vehicles, a diesel oil tanker, an ambulance, three earth-moving machines and camp offices of the Rural Water Supply and Sanitation (RWSS) at the project site. They also attacked the police, government and RWSS officials.

In retaliation, police August 13 arrested 24 protestors on the charge of stalling the project work.

Parida gave a number of suggestions to resolve the deadlock. “The construction work should be immediately stopped. The government should agree to build a barrage on the river to store water,” he told DTE.

The Government of Odisha should constitute a committee led by the chief secretary of the state or the development commissioner or any principal secretary rank officer.

It should comprise of all stakeholders and all government departments including forest, environment and climate change, water resources, drinking water as well as environmentalists, especially those who have worked in mangrove ecosystems like the Bhitarkanika National Park.

The Kharosotra passes through the park and the project has also put a question mark on its saltwater or estuarine crocodile population.

The government should unconditionally withdraw cases against protestors. FIRs have been filed against 900-1,000 people. The 24 who have been arrested should be released, Parida said.

The dialogue process should continue. The dialogue should be between protestors, environmentalists and the high-level committee of the government and not the district collector. Unless high officials are involved, it is of no use.

The consultant for the project has to be chosen by the government. The impact assessment report has to be prepared during the dry season.

The protestors do not object to giving drinking water to people in Bhadrak district. But they remain apprehensive that this may be a cover for diverting water to multinational companies. Instead, they propose that desalination of water from some other local rivers can be done.