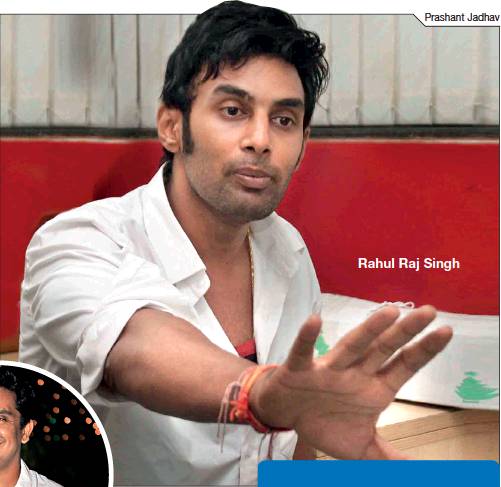 Actor Rahul Raj Singh has accused screenwriter and producer Mushtaq Shiekh of sexual harassment and later destroying his career when he refused to give in, reportsMid-day. Rahul Raj is the first man in the film and TV industry to come out with his account as part of MeToo movement in India.

Rahul is also the boyfriend of late actor Pratyusha Banerjee. He was charged with abetting suicide of the Balika Vadhu actor and is out on bail at present.

I hope more guys like me, who have been sexually harassed, come forward and speak up: Rahul Raj Singh

A day after sharing his experience of being sexually harassed by writer Mushtaq Sheikh on his social media account, TV actor Rahul Raj Singh (late Pratyusha Banerjee’s boyfriend) now plans to register an official complaint against Mushtaq with the writers’ association.

Talking about the incident, which happened between 2006 and 2007, Rahul shared, “I first met Mushtaq in 2006, when I decided to pursue films after modelling. He was a known writer and was well-connected in the Bollywood and TV industry. I would meet people like him, hoping to get a foothold in the industry. I was supposed to do a couple of projects with him, but unfortunately, he was expecting something else in return. He told me, ‘I have thought about you for one project and want to cast you in it. Meet me after office hours and we will discuss the project’. However, I found his body language suspicious when I met him. I didn’t want to judge him by his sexual preferences and emotions. But after a couple of meetings, he started calling me up late at night. I would still take his call, because I was a newcomer and didn’t have any godfather in the industry. He would often tell me how things worked in the film industry and what people did to get work here.

One night he asked me to meet him at 11 pm at a coffee shop in Bandra. Later, he took me to his house and told me that I am going to do something to you, which you are going to enjoy. It will be different, but you will like it. I got scared and told him that he was a friend and that I know his family. I left and eventually lost the film. Then, he stopped taking my calls and would only text me. I didn’t want to lose the film, but I realised that he wanted to only have sex with me. It wasn’t direct; it’s not like he pounced on me, but he would try to come close to me. It was pretty much like, if I didn’t surrender, I wouldn’t get work.”

Rahul further shared, “I couldn’t take it for long and I gave up on my filmi dreams after doing one film, which unfortunately didn’t do well. Then I decided to try my luck in television. I bagged my first show Amber Dhara, which was conceptualised by Mushtaq. While I was under the impression that I got the show for my talent, after meeting him, he told me that I bagged the role because of him. Unfortunately, the show didn’t run for long. I bagged another show, titled Mata Ki Chowki with the same production house, for a channel Mushtaq was then heading.

He extended his offer once again to me (to sleep with him) if I wanted to keep my job, but I refused. Somehow, after that, my character fizzled out of the show. For another show titled Ganesh Leela, I had to deal with him again, as it was for the same channel. He called me to meet him at night and told me to come for a drive. We were driving around Aarey Milk Colony, when he suddenly grabbed my head towards him and started unbuttoning my clothes. I got very angry and upset, and told him that I would stop the car and leave him in the middle of the jungle. It was a tough ride back, and after I refused his advances, he made sure that I was out of work. Eventually, I quit TV because I didn’t want to compromise. My career on TV was cut short because one man got the lust and power equation wrong.”

Talking about why he has spoken about this now, Rahul said, “I didn’t speak about it back then, because we didn’t have social media where we could voice it. Also, I thought no one would believe me because he was well-connected. I don’t want him to be punished nor do I intend to file a police complaint. I want him to feel ashamed about what he has done. I hope more guys like me, who have been sexually harassed, join the #MeToo movement. This will discourage those who misuse their power.”

Rahul, who has approached the writers’ association, said, “I have written to the association and will file an official complaint soon.” Mushtaq Shiekh is yet to respond to Rahul Raj Singh’s allegations.

As this cycle continued, Rahul Raj claims he eventually left TV 10 years ago. “I used to earn around Rs 3-4 lakh per month in those days. I owe answers to my friends and fans as to why I quit TV. It was because of Mushtaq Shiekh. I told my parents the same thing 10 years ago: I can’t do this, because I will be forced to sleep with someone,” he said in the report. Mushtaq Sheikh is yet to respond to the claims

We tried to get in touch with Mushtaq Sheikh for his version, but he did not respond to our calls and messages till the time of going to press.