This means the World Bank has exposure to the contentious Carmichael project, from which a growing number of Australian and overseas banks are shying away.

Adani acquired the exploration rights from Linc Energy, which has since folded and is facing criminal charges over Queensland’s largest pollution scandal.

There is divided public opinion in Australia over the prospect of a taxpayer-funded loan of up to $1.1bn for the rail portion of the Carmichael project.

Adani’s loan application to the Australian government’s Northern Australia Infrastructure Facility has conditional approval, but questions persist about its eligibility, and the issue of taxpayers lending to a project held by corporate structures linked to the Cayman Islands tax haven.

The Adani group is also embroiled in several Indian criminal investigations into possible fraud and corruption, including the alleged siphoning of money offshore through an invoicing rort and the alleged profiteering on imported coal through inflated valuations.

An Indian subsidiary of the Australian project’s parent company, Adani Enterprises, was accused by its own lawyer this year of fraud, illegal land purchases and other violations over a solar project. Adani has denied wrongdoing in all cases.

The Greens have pointed out that Adani paid $39,000 in tax on $487m in earnings from its Australian enterprises in 2014-15. An environmental lawyer and a Greens state candidate Michael Berkman said that equated to a “measly” 0.008% of Australian income.

Adani’s former adviser on Carmichael, the Commonwealth Bank, as well as National Australia Bank are among those that have either withdrawn or ruled out involvement, reportedly in part because of the environmental controversy. 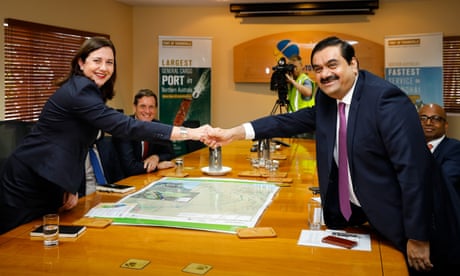 The mine is expected to create more annual carbon emissions than New York City and is being fiercely resisted through legal action by traditional owners, whose opposition could prove the decisive hurdle for Adani gaining finance to deliver the project.

That was despite its Mundra coal plant and port being blamed in an Indian Ministry of Environment investigation for flouting public consultation requirements, and creating ecological and social harms, including air and water pollution, destruction of mangroves and curtailing the livelihoods of local fishers.

The managing director of Inclusive Development International, David Pred, said it was “a huge misconception that IFC funding should be regarded as a gold seal of approval for corporate environmental and social practices”.

Kate Geary of the US-based Bank Information Center said the IFC revelations were part of a “worrying trend – not just at the World Bank, but other development banks too – of hands-off lending through third parties to projects they would never usually touch”.

“At the same time, the bank is washing its hands of the mounting human and environmental costs – to forests, rivers and communities,” Geary said