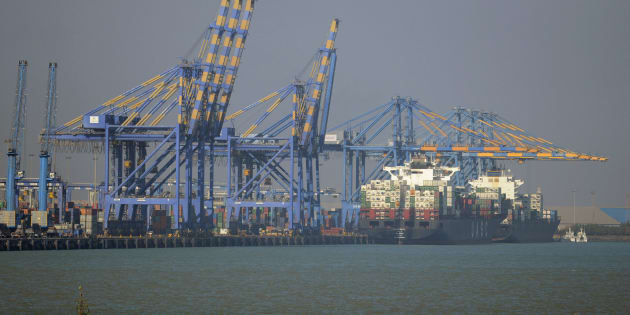 AFP/GETTY IMAGES
A view of the Adani Port Special Economic Zone in Mundra. Image for representational purposes only.

NEW DELHI—The Adani Group did not violate conditions of environment clearance (EC) by carrying out construction activities over a “sand hill” located within the premises of its commercial port at Mundra in Gujarat, a five-member expert committee led by environmentalist Sunita Narain has said in a report submitted to the Supreme Court.

The court is yet to adjudicate on the report’s findings.

In 2013, in a separate matter, the same expert committee found “incontrovertible evidence” that the Adani port project at Mundra had not complied with the conditions of its environmental clearance.

In 2018, the panel prepared the report at the direction of the Supreme Court in response to a petition filed by Mundra resident Pravinsingh Bhurabha Chauhan.

In his petition, Chauhan claimed that a “sand dune” named Mor Dhuva had been damaged by an Adani Group company—the Adani Ports and Special Economic Zone Ltd (APSEZ)— while constructing the port.

Damaging the dune, the petition said, was in violation of the terms of the clearance granted by the Union environment ministry, which specifically states that “sand dunes, corals, mangroves, if any, on the site shall not be disturbed in any way”.

“Dhuva” is a Gujarati word used to refer to the sandy natural features in the Kutch region. The precise legal definition of a dhuva, specifically Mor Dhuva—as sand dune, or sandy hill—will decide if APSEZ has violated the terms of its environment clearance or not.

Chauhan’s petition also contends that the Gujarat state forest department facilitated the transfer of Mor Dhuva to the company by wrongfully including the sandy feature as part of the forest land that was to be legally transferred to the APSEZ.

The precise legal definition of a dhuva, specifically Mor Dhuva—as sand dune, or sandy hill—will decide if APSEZ has violated the terms of its environment clearance or not.

The expert committee’s report has said Adani did not violate EC conditions because it concluded that: a) Mor Dhuva is a sandy hill, not a sand dune, and b) the forest department did not wrongly measure the land transferred to Adani.

HuffPost India has reached out to Narain, the lead author of the report, and the Adani Group, and will update this story once they respond.

Naran Gadhavi of the Kheti Vikas Seva Trust—who has filed several legal cases against the Adani Group in recent years and was one of the people the expert committee met during its field visit to Mundra — told HuffPost India that he was “disappointed” and “dissatisfied” with the committee’s report.

On his part, petitioner Chauhan repeated his claim from the petition that “Mor Dhuva is a sand dune” and stated that his counsel will prove this in court.

The expert committee report, submitted in January 2018, relies on two methods to arrive at a conclusion about the sandy structure, or “dhuva”: a field visit to the site of the port project and an evaluation of maps submitted by the Adani Group and the petitioner.

Following its field survey, the panel said there are five dhuvas in and around the port—Bharadi Mata Dhuva, Vekhri Dhuva, Bet Dhuva and another unnamed Dhuva contiguous with the controversial Mor Dhuva—that once comprised part of a reserve forest called the Mundra mangrove forest.

To understand what a dhuva is, the committee studied ‘undisturbed’ and ‘pristine’ dhuvas in the area rather than the remains of the Mor Dhuva

All of these were in the charge of the state forest department until the APSEZ took possession of Mor Dhuva and changed its land use from forest to non-forest and carried out dredging, reclamation and construction activities.

To understand what a dhuva is, the committee studied the ‘undisturbed’ and ‘pristine’ dhuvas in the area rather than the remains of the Mor Dhuva. After studying the other four dhuvas, the committee concluded that “Dhuva is not synonymous with shifting sand dune. Instead it is the term for the geomorphological area between the sea and the land. It can be broadly said that the Dhuva’s geomorphological features are sand hills with vegetation.”

The committee also studied two sets of maps of the region: A Coastal Zone Management Plan map, verified by the Gujarat government, and submitted to the committee by the Adani group—which does not mention the presence of a sand dune. And a topological map, or toposheet, prepared by the Survey of India and submitted by the petitioner—which, he says, clearly indicates the presence of a sand dune.

After considering both maps, the committee said the Survey of India map was “ambiguous” and chose to rely on the CZMP plan (submitted by the Adani group) which does not mention the dune.

The expert committee thus concluded that it could not be proved that the Adani group “violated EC conditions in terms of its change of land use in Mor Dhuva”.

“In our view there is no ‘ambiguity’ in the toposheet submitted by us as in the given series, all maps employ the same reference point, scale, projection, conventional symbols, signs and colours,” the petitioner’s counsel, advocate Shilpa Chohan, told HuffPost India in an email . “The conventional symbol for sand features is clearly depicted in the toposheet submitted by us before the Committee as well as Supreme Court of India and as such there is no ambiguity.”

Chauhan, the petitioner, has also accused the Gujarat forest department of facilitating the transfer of Mor Dhuva to the Adani Group by wrongfully measuring forest land legally allotted to Mundra port. He has made this claim based on replies received from the forest department to his Right To Information (RTI) applications. According to him, the replies clearly state that there are various sand dunes in the area including Mor Dhuva and no permission has been given to “break” them.

On comparing the two sets of documents, the expert committee concluded that “there is no evidence to show that Mor Dhuva was not part of the allotment” to Adani

On comparing the two sets of documents, the expert committee concluded that “there is no evidence to show that Mor Dhuva was not part of the allotment” to Adani and that the land when handed over “was given in excess”.

Advocate Chohan disagreed with the expert committee’s findings and said in her email responses to HuffPost India‘s questions, “(The) RTI reply dated 05.09.2017 by the Forest Department, Bhuj which forms part of record of the committee and the Hon’ble Supreme Court confirms that the sand dunes in the area includes Mor Dhuva.”

Interestingly, though, the expert committee report also states that the forest department provided RTI replies to the contrary to Chauhan. Analysing both sets of documents, it remarked that the contrasting replies by the department was either a case of “extremely shoddy and careless work” or a “disregard for answering such queries with any degree of seriousness”.

The Narain-led expert committee was first asked to study the APSEZ in Mundra in September 2012 by the environment ministry. The controversial project was mired in allegations of widespread violations of environmental norms.

The committee, consisting of Narain, Ramesh Ramachandran, Director, National Centre for Sustainable Coastal Management, and Anthony Gnanamuthu, Lalit Kapur and Ajay Mehrotra of the Ministry of Environment, Forest and Climate Change, submitted its first report to the then environment minister Jayanthi Natarajan in April 2013.

Specifically, the 2013 report mentioned destruction of mangroves, problems in management of fly ash utilization and disposal, absence of monitoring of groundwater which had turned saline, among other things.

The expert committee examined three more issues not mentioned in its Terms of Reference: fishermen’s livelihood and access to fishing grounds, village common land and cumulative impacts of power plants and port projects.

The report also recommended “remedial measures” for “effective deterrence for non-compliance” with the EC conditions. They were: setting up an Environment Restoration Fund that is one percent of the project cost or Rs 200 crore, “whichever is higher”; and cancellation of EC for north port, which is part of the overall project.

The 2013 report, however, made no mention of the leveling of sand dunes. In 2015, Chauhan filed a petition on the matter of Mor Dhuva in the apex court. In October 2017, the court asked the expert committee to submit another report.

The committee submitted its second report—on the matter of sand dunes—in January 2018 but this was distributed to all the concerned parties only in mid-September.

The case last came up in the SC on 14 September 2018. The court has asked it to be listed after four weeks since then.

Facebook in the dock for coaxing teenage girls to befriend middle-aged men
Gujarat Villagers write to Obama, Modi against nuclear power plant
The Plight of Women & Young People in the Rohingya Refugee Crisis
India - Never seen a woman journalist braver than her