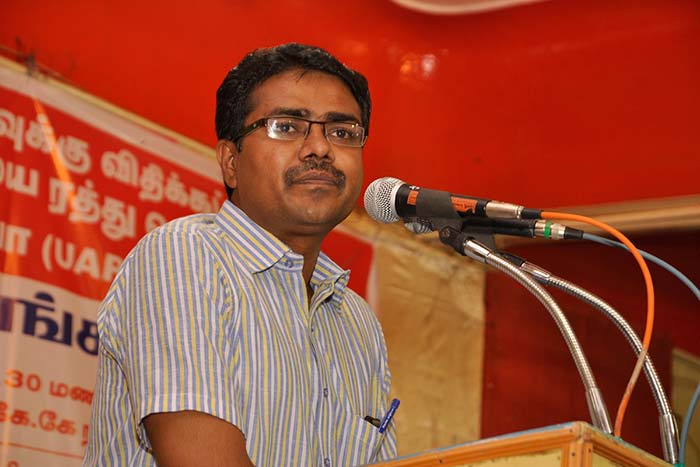 The wife of advocate Vanchinathan, arrested on the charges of spearheading the anti-Sterlite protests in Thoothukudi, has filed a habeas corpus petition before the Madurai Bench of the Madras High Court on Tuesday. She sought an order restraining the authorities from invoking detention under National Security Act, 1980 against her husband.

The petitioner A. Nandini claimed that false cases were foisted against her husband and police fabricated confession statements against him. She said that her husband provided legal assistance as an advocate and a civil rights activist and had voiced for the people in their agitation against Sterlite Copper.

Ms. Nandini said that the police did not follow any mandatory procedures while arresting her husband. She said that he was picked up by the police in plain clothes from Chennai Airport on June 20. No intimation was given to the family members on the arrest, she said.

Senior counsel M.Ajmal Khan, representing the petitioner said, “Voice of dissent are being silenced”. He questioned as to how a prima facie case was made out to remand Vanchinathan.

However, Additional Advocate General K.Chellapandian said Mr. Vanchinathan was arrested following the charges against him and after his plea for anticipatory bail was dismissed by the High Court Bench.

Taking up the plea for hearing, a Division Bench of Justices C.T.Selvam and A.M.Basheer Ahamed directed status quo be maintained in the case and adjourned the case by a week for further hearing. The court also heard a slew of petitions filed against the police for arresting public under the National Security Act,1980. The cases have been adjourned to next week.

Mr. Vanchinathan is lodged in the Palayamkottai Central Prison. The Thoothukudi police had booked cases against him under Sections 147 (punishment for rioting), 148 (rioting, armed with deadly weapon), 188 (disobedience to order duly promulgated by public servant), 353 (assault or criminal force to deter public servant from discharge of his duty) and 506 (punishment for criminal intimidation) of the Indian Penal Code and Section 3 of the Tamil Nadu Public Property (Prevention of Damage and Loss) Act, 1992.