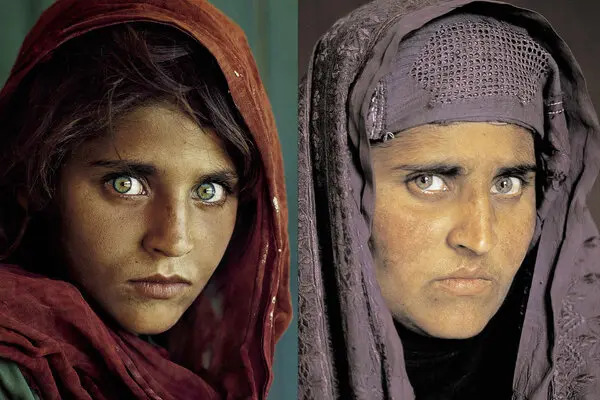 Sharbat Gula, whose haunting portrait was featured by the magazine more than three decades ago, was evacuated to Rome after the Taliban takeover of Afghanistan.

Sharbat Gula, who became an international symbol of war-torn Afghanistan after her portrait at a refugee camp was published on the cover of National Geographic magazine in 1985, was evacuated to Rome after her country fell to the Taliban, the Italian government said Thursday.

Ever since the U.S. pulled out of Afghanistan in August, nonprofit organizations had appealed for help in evacuating Ms. Gula, the Italian government said in a statement.

“The prime minister’s office has brought about and organized her transfer to Italy,” the statement said. It did not say when she arrived, and the foreign ministry later said it did not know whether she would remain in Italy or go elsewhere.

Ms. Gula, now in her late 40s and the mother of several children, was believed to be 12 when Steve McCurry photographed her, with a piercing, green-eyed stare, in 1984 in a refugee camp in Pakistan. He did not learn her name until 2002, when he found her in the mountains of Afghanistan and was able to verify her identity.

A 2002 National Geographic article about Mr. McCurry’s search for her described the adult Ms. Gula: “Time and hardship had erased her youth. Her skin looks like leather. The geometry of her jaw has softened. The eyes still glare; that has not softened.”

In 2016, Ms. Gula was deported from Pakistan after being arrested on charges of obtaining false identity documents, a common practice among Afghans in Pakistan. Human rights groups condemned the Pakistani government for sending her back to Afghanistan. On her arrival, the Afghan president at the time, Ashraf Ghani, gave her a warm welcome and provided her with a government-funded apartment.

In August, Taliban leaders moved into the presidential palace that had been occupied by Mr. Ghani. Their takeover once again displaced hundreds of thousands of Afghans. Pakistan braced for as many as 700,000 refugees. Italy has evacuated more than 5,000 people from Kabul, the government said.

In the United States, more than 22,500 Afghan refugees have been resettled as of Nov. 19, including 3,500 in one week in October. About 42,500 more remain in temporary housing on eight military bases around the country while they wait for housing.

Until the Taliban takeover, the rights of Afghan women had been expanding. Afghan girls were going to school and getting college degrees, and more were participating in civic life. But under the first few months of the Taliban’s conservative rule, women have already faced new restrictions, like not being allowed to play sports. The Taliban have severely restricted education for women, and Taliban gunmen have gone door-to-door in some neighborhoods looking for anyone who supported the American efforts in the country.

Heather Barr, the associate director for women’s rights at Human Rights Watch, said that it was a particularly dangerous time to be a high-profile woman in Afghanistan. She said there had been cases of prominent women being threatened or intimidated, or feeling like they had no choice but to stay in hiding or change locations constantly to avoid attention.