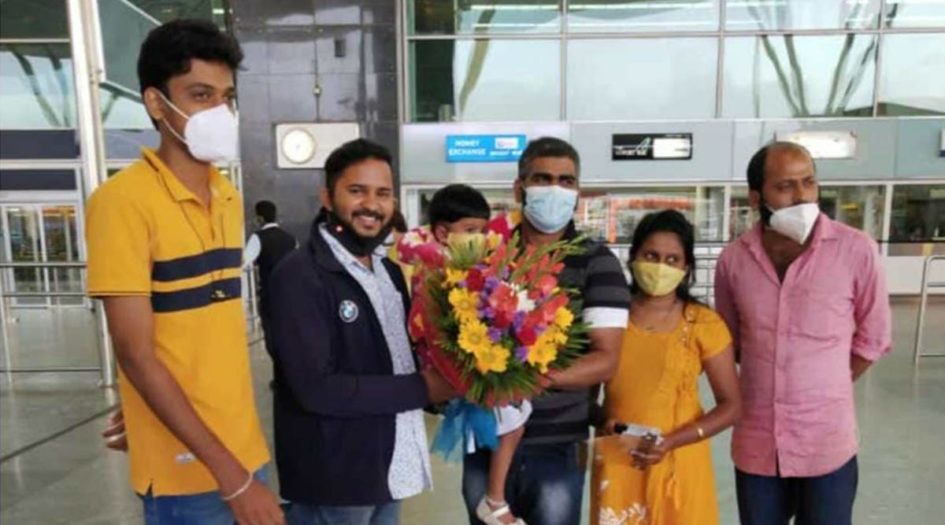 Harish Bangera with his family on his arrival at Bangalore airport Wednesday. Probe in India helped clear him. (Express photo)

Back home in Udupi, his wife Sumana M filed a complaint with the district police, saying unknown persons had impersonated Bangera on Facebook.

An air-conditioning technician belonging to Udupi district in Karnataka returned home Wednesday after spending 604 days in a prison in Saudi Arabia on charges of defaming the Crown Prince and a community on social media. Harish Begera, 34, faced life in prison or the death penalty, before a probe by the Udupi police found that impersonators were behind the post that landed him in jail.

A resident of Bijadi village, Bangera was arrested on December 22, 2019, in the Saudi city of Dammam where he worked. This was three days after he shared a Facebook post that supported the Indian government’s Citizenship (Amendment) Act and plans for a National Register of Citizens, drawing his employer’s ire

“I released a video apologising for sharing the post. I did not, however, mention that it was specifically for the post which I had made, and later deactivated my Facebook account,” Bangera, who arrived in Bengaluru on Wednesday morning, told The Indian Express.

But soon, there was another Facebook account, in his name, where defamatory posts were put up against Saudi Arabia’s Crown Prince Mohammad bin Salman and a community, leading to his arrest.

Back home in Udupi, his wife Sumana M filed a complaint with the district police, saying unknown persons had impersonated Bangera on Facebook.

In October last year, local police arrested two brothers from Moodbidri town in Dakshina Kananda district, Abdul Huyez and Abdul Thuyez, after their probe found that the two had created the Facebook account in Bangera’s name the same day as he deactivated his profile. According to police, they did it out of anger over Bangera sharing a post supporting the CAA and NRC.

At Bengaluru airport Wednesday, Bangera couldn’t control his tears seeing his four-year-old daughter after 19 months. “I was made to look like a terrorist by posts that were made by somebody else. My family and I went through horrific times,” he told The Indian Express. “Before I was jailed I used to make video calls to my wife and daughter three-four times a day. I barely spoke to them after I was jailed.”

He added that he was always confident he would get justice. “But I was freed only after spending 604 days in prison.”

#India - Corporate Globalisation and Conflict #Sundayreading
Stop Bharat Biotech's COVAXIN trial in Bhopal - 42 Organizations and 189 citizens demand investigat...
They saved their land from Naxalism, still a `threat to the state'
India - The blurring line between corporate and national interests