The formal closure of Posco’s steel plant project in Odisha is seen as a victory of agrarian economy over unwanted industrialization and the betel leaf farmers of Jagatsinghpur are rejoicing, although those who lost their land face new challenges 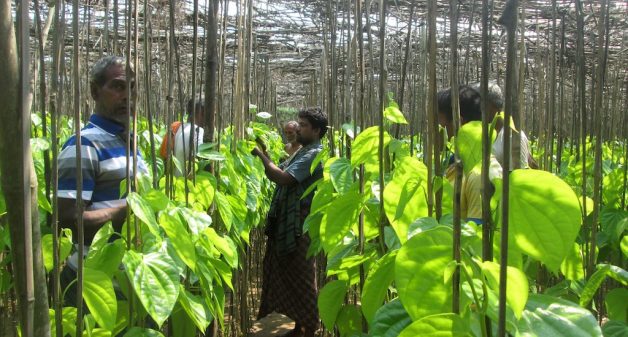 A betel leaf vineyard in Jagatsinghpur district of Odisha. (Photo by Basudev Mahapatra)

In a unique case of victory of the agrarian economy over mineral-based industrial economy, betel leaf farming in the Jagatsinghpur district of Odisha proved to be more dependable and promising than the proposed $12 billion integrated steel plant project planned by one of the world’s largest steel producer POSCO.

The betel leaf stood firm against steel and forced the South Korean steel major out of its Odisha project. POSCO confirmed the withdrawal of its project by requesting the Odisha government to take back the land transferred in its name, according to a statement by Odisha’s Industry Minister Devi Prasad Mishra made on March 18.

POSCO had suspended its the project in July 2015 and, later, by deciding to temporarily freeze the project in 2016. Experts say POSCO had to drop the idea of investment in Odisha as the project couldn’t make any progress over the years due to strong resistance by local people. Since signing a memorandum of understanding (MoU) with Odisha government for the project on June 22, 2005, POSCO faced consistent opposition from local people, many of whom were betel leaf cultivators.

It’s important to realize the economic importance of betel leaf in order to understand the factors behind people’s fight against the gigantic project that would have attracted largest investment by a foreign company to India.

“This is not just a leaf, but the soul of our life and economy and the source of income that any industry can hardly offer to us,” said Ramesh Chandra Pashayat of Govindpur village, who had lost his betel vineyard for the POSCO project.

“After meeting all expenses and making the labor payments, I used to earn around Rs 50,000 a month from my vineyard on nearly 40 decimal of land. This apart, the cashew plants around it fetched me be Rs 30-40,000 in a season. This apart, the mango and moringa trees in the vicinity always supported our food and income,” said Sridhar Swain of the same village, while asking: “Given the fact that I don’t have any formal education, can POSCO or any other industry offer me an opportunity of this kind?”

“This is the reason why we opposed POSCO and wanted to protect our land and the dependable source of livelihood — the betel vines,” Sridhar told VillageSquare.in. 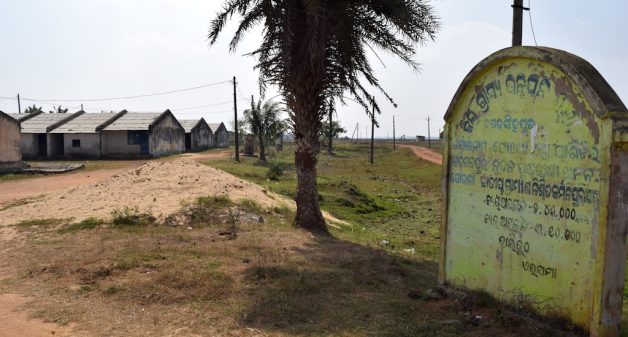 A transit camp lies abandoned after supporters of the Posco project were evicted. (Photo by Basudev Mahapatra)

According to the farmers, the vineyards raised by the villagers had the potential to employ thousands of people from this locality and even from outside. The daily transaction in the betel leaf business in the area exceeded Rs 5 million.

“The cultivation of betel leaf generated significant income. Destruction through the project development promised little compared to the social, economic and cultural benefits of existing livelihoods,” notes the Routledge International Handbook of Criminology and Human Rights, based on facts collected on the ground.

As per rough estimates, a vineyard raised on an acre (100 decimal) of land usually fetches the farmer a profit over Rs 1 million every year. This means every decimal of land pays the farmer at least Rs 10,000 a year. This economics probably made the betel leaf stronger than steel and a better choice for people.

“While acquiring land for POSCO, the government offered us Rs 11,500 per decimal of land as one-time compensation money. How could a farmer sacrifice the land permanently for such a meager compensation?” questioned Bishnu Das, a betel leaf grower.

Despite strong opposition from the farmers, the government didn’t heed to their voice and demands. Going by its unilateral decision in favor of POSCO, the local administration demolished hundreds of acres of vineyards by force. “Some of the vineyard owners were forced to accept the compensation money and vacate their land while at least 32 farmers didn’t get any compensation for their vineyards,” said Nibha Samal, a farmer.

“I had spent nearly 3 lakhs of rupees to raise my vineyard on 60 decimals. The administration demolished it but didn’t pay any compensation money. The list of farmers published by the administration listed many who never had a vineyard while several of the real farmers didn’t feature in the list,” 60-year-old Shiba Bardhan told VillageSquare.in. “We have filed cases against such injustice done to us by the administration.”

“They did not only destroyed the betel vines but also cleaned the area by cutting trees around and made our green surrounding look like a desert,” said Gouri Das, a woman farmer. 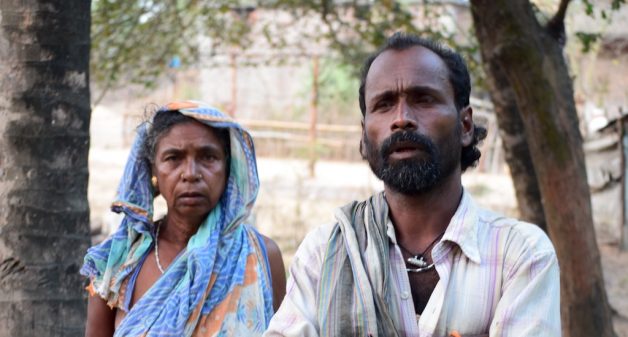 An anguished Gouri Das, seen here with her son Ranjan Das, has lost her land to the now-abandoned steel project. (Photo by Basudev Mahapatra)

Despite all efforts to curb the people’s movement and acquire the land, POSCO is now a lost dream for the Odisha government.  On the other hand, though the people’s movement came out victorious so far, it’s only a lose-lose situation for the people who lost their land, livelihood sources and everything for POSCO.

Their betel vines were demolished with promises that the upcoming project would provide an alternate livelihood. As the industry didn’t come, their livelihood is now completely lost.

“The compensation money they paid has been exhausted by now because we had to live without any immediate employment. The project didn’t happen. We are now reduced to daily wagers. How will we survive with a daily wage of 200 rupees?” asks an angry Gouri Das who has lost his land.

“The government forgot all its promises like an interim stipend, alternate livelihood etc. So, once farmers, we live like beggars today,” said Ramesh Das, who has not only lost his land but also has broken his hand in the conflict between people and the government over the POSCO project.

Those who extended whole-hearted support for the project and submitted their land are living a more miserable life. “The government betrayed us. We surrendered all our resources to see the industry in our area and enjoy the benefits of industrialisation. But the government couldn’t make it possible. Nor has it returned the land to us to continue our traditional economic activities like raising betel vines to make a survival,” said Tamil Pradhan, leader of people who supported the government.

The most pathetic story is of the people who sacrificed everything for POSCO and were kept by the government in a transit colony. “They were the first supporters of the project. But as POSCO decided to freeze the project, we suddenly became a burden on the government. The administration threatened to disconnect electricity and lock the houses unless we vacate the transit colony immediately and return home,” said Chandan Mohanty of Patana village, who was also the president of the POSCO Transit Colony Association.

“The administration even didn’t bother to shift us to our village safely. So, we had to negotiate with people who opposed POSCO project and came back to our village to live our own destiny,” he said with agony.

Sounds of another battle

As the plights of people keep increasing since POSCO has shown indications to withdraw its Odisha project, the discontent among people of the project area is simmering too. “Since POSCO has scrapped the Odisha project and the government has not taken any responsibility of the affected people and the land losers, the lands must be returned to people immediately,” said Tamil Pradhan who also hinted that the affected people and land losers are to hold a meeting soon to decide on the issues and to re-occupy their land.

“If the government was not sure about the intentions of POSCO, why did it take away and ruin our guaranteed sources of livelihood? Even if we get the land wherefrom we shall get money to re-raise our vineyards?” asked Jayanti Pashayat and many other farmers who have lost their land has been acquired for the POSCO project.

Even the POSCO Pratirodh Sangram Samiti (PPSS), which opposed the steel project, has announced to start a mass repossession drive in the affected villages.

However, there is very little chance for the land losers to get back their land because, as per Odisha government’s revised policy for land acquisition notified on 7th February 2015, “Land acquired and possession taken over but not utilized within a period of five years from the date of possession shall in all cases revert back to the State and deposited in the Land Bank automatically.”

“The acts of the government are highly questionable because it destroyed the sources of people’s livelihood and couldn’t bring the industry to fulfill its promises of alternate livelihood. Putting people in such a miserable state is purely anti-people and against the very spirit of democracy. We won’t allow this to continue and, also, won’t allow the farm lands to be converted for any other use,” said Abhay Sahu, president of PPSS.

“Shortly, we are going to start another movement against the government and mobilise people to repossess their farm lands and reconstruct their vineyards for the cultivation of betel leaves,” PPSS Spokesperson Prashant Paikray stated.

The sounds of another war to reoccupy the land and revival of the betel leaf economy have started reverberating in the villages surrounding the land acquired in the name of the POSCO project.

Basudev Mahapatra is a journalist based in Bhubaneswar.

Open letter to PM Modi on Compulsory Licensing (CL) for TB Drug #mustshare
10 years of the Forest Rights Act: Say no to change in progressive and pro-people's law
UP election: How BJP changes its narrative within 50 kms, from Hindutva to secularism
Death threats, assault and harassment have not deterred Vyapam whistleblower