After More Than 7 Months in Jail, Dr Kafeel Khan Gets Bail From Allahabad High Court

Dr Khan’s family had applied for bail on six different occasions in the past seven months.

NEW DELHI: “Bail ho gayi, Allah shukar…” was the short message from Adil Khan, brother of Dr Kafeel Khan this afternoon. The message captured the relief that poured out over the telephone call that followed the message. Adil Khan, barely able to speak, handed over the telephone to their lawyer Nazrul Islam Jafri who has been representing the doctor, jailed for over eight months in an ordinary criminal cell for a ‘crime’ manufactured by Uttar Pradesh Chief Minister Yogi Adityanath’s government.

Jafri who was finally able to make an argument in what really amounted to the first hearing on the case by the courts in eight months, said there was no evidence against the doctor. Pointing out that the state government itself had maintained that not a single “unnatural” death had taken place in BRD hospital, Jafri said that none of the charges could be held against Khan. As he told The Citizen Sections 409, 308, 120 B could not be applied as there was no evidence whatsoever against the young doctor.

The lawyer, sounding as relieved as the family, said that he would now make a case for questioning the procedings altogether. The Citizen had been the first to report on the long stint that the doctor who had tried to save the child patients from dying because of a shortage of oxygen supply, had attracted media attention at the time as he was the only senior doctor visible, trying to do his job. He was directly threatened by Adityanath, and later arrested.

The proceedings have amounted to a travesty of justice, as the bail hearing was repeatedly delayed on one pretext or the other. Sometimes the lawyer was not able to make it, sometimes the clerk had not made the desired notings, and at least once the court notice actually showed two dates for the hearing at the same time.

Adityanath had directly threatened Khan during a visit to the hospital after the deaths. This had led the doctor to fear for his safety, and seek sanctuary in Delhi, away from Gorakhpur that is the CM’s home constituency. The Citizen recently reported on the kind of harassment his family had to undergo, midnight visits by the UP police lasting several hours, threatening his wife and mother, roaming through the house while the children howled in terror. And then moving to take his wife into custody, agreeing to substitute her with Adil Khan when he intervened. Complete harassment of a kind that defies all law.

The bail has now been given when it could not be delayed any longer. Particularly as the Supreme Court intervened to grant bail to another accused Manish Tiwari of Pushpa Sales, the agency that was actually supplying the oxygen.

But then as his family said, when the ordeal and the tension that had been gathering since April 25 date had been set, “Shukr Allah ka” that he has got bail. Jafri said the order should be with him tomorrow, after which Kafeel Khan should be able to go back for serving a sentence for a crime created by the Adityanath government.

A campaign to free Dr Khan had also built across India after The Citizen report went viral. Lawyers, ordinary citizens, all sections of society contacted the family with offers of help. Even BJP dissident and actor Shatrughan Sinha tweeted just recently: 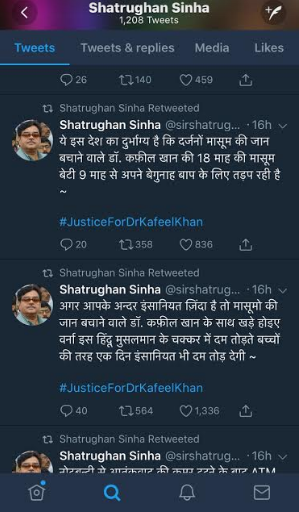 Dr Khan’s family had applied for bail on six different occasions in the past seven months.

The Gorakhpur Police have already dropped charges of corruption and private practice against Kafeel, who is one of the nine accused in the BRD Medical College case that left many dead allegedly due to oxygen shortage in the children’s ward.

Kafeel, the head of the encephalitis ward and an assistant professor at the paediatrics department, was removed from the post of the nodal officer at the National Health Mission in the wake of deaths.

Khan has been charged under Sections 120-B, 308 and 409 of the IPC by the office of DG Medical Education.

Addressing a press conference in Delhi last week, Dr Shabista Khan, the wife of Dr Kafeel Khan, alleged that the prison authorities were not giving proper medical care to her husband. Citing her husband’s ailing health, Dr Shabista urged the government to consider his deteriorating condition as an emergency and grant him bail on medical grounds.

“My husband is a heart patient, his blood pressure is running high, he is also suffering from depression. Who will bear the responsibility if something happens to him,” asked Dr Shabista Khan.


Speaking to media during his visit to district hospital, Kafeel said, “I am being framed by administration. A doctor is falsely accused.”

Parveen told Adityanath that her family was going through a difficult time and that the CM must help them.

“My son was arrested over the BRD Medical College incident while he was doing his duty because a conspiracy was hatched against him. I have requested CM Yogi Adityanath and he has assured me to look into the case,” said Nuzhat Parveen

#India -Bhopal gas victims take out rally and demand "no Justice, no Vote"
Malaysian Woman wins landmark case on discrimination over pregnancy ‪#‎‬womenrights
'Left must recognise BJP as its enemy No. 1, including in Bengal," says the CPI(ML) general secretar...
India's Marie Antoinette Moment