Ahead of Trump’s visit- Driven up the ‘wall of shame’, Kerala activist to take on BJP govt 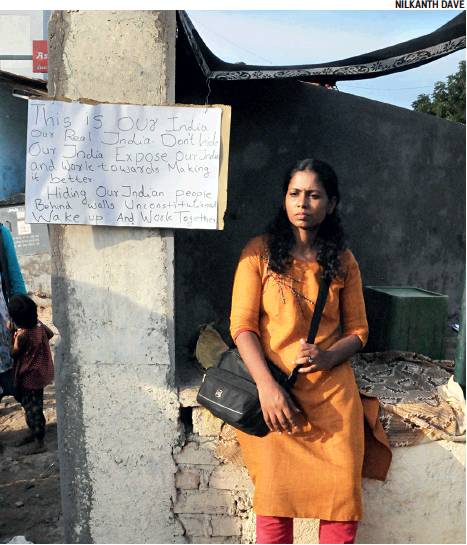 A social activist from Kerala, the state which has put up the fiercest resistance to the saffron brigade, has reached the BJP bastion to protest against the ‘wall of shame’ being erected near Indira bridge. The half-a-kilometre long 4-ft wall is being built by Ahmedabad Municipal Corporation to keep Saraniyavas slum out of sight ahead of US President Donald Trump’s visit on February 24. Perched on a platform adjoining the wall, Aswathy Jwala, 33, who is on a hunger strike, says, “If I am not arrested, I will be sitting right here on Monday when Trump’s convoy passes by.” She has also hung a placard with a poignant message on the wall. It reads: “This is our India. Our real India. Don’t hide our India. Expose our India and work towards making it better. Hiding our Indian people behind walls is unconstitutional. Wake up and work together.”

This govt is ashamed of its own people

Aswathy is clear about her motive: “There are 5,000 people living in 2,000 shanties here in the Saraniyavas slum. I want all of them rehabilitated. You can spend Rs 80 crore on a guest’s visit, but do nothing for your own poor? As a government of the people, your job is not to mock their poverty or be ashamed of it, but to uplift them.”

Boarded train after reports in papers

Aghast after reading about the wall in the papers, she boarded a train with a co-worker and reached Ahmedabad on February 17.

Aswathy, who runs an NGO for the destitute in Thiruvananthapuram, received Kerala government’s Youth Icon award in 2015 for exemplary social work. For the past six years, her NGO Jwala, which is on a mission to eradicate hunger, has also been rehabilitating the homeless wandering the streets and setting up shops for the disabled to help them earn a livelihood.

‘Not a Keralite, I am an Indian first’

“Please do not ask me why I am here in Gujarat when there are issues galore in Kerala, my home state. I am a social worker and an Indian first. We are not restricted by caste, class or others barriers,” she says, expecting the obvious question.

Regarding her protest near the wall, she says she decided to “interfere at the opportune moment” so the matter reaches people from across the world and forces the government to rehabilitate the slum dwellers residing here for nearly seven decades.

When she first met the residents of Saraniyavas on Monday, they were all quite supportive of her, she says. But gradually, many of them began distancing themselves fearing harassment by the police.

“The women were in tears, blaming themselves for not being able to give me space inside the slum. I understand their situation. Their apprehensions are not unfounded. So, I decided to move out and carry on with the hunger strike. It is a safety risk, but I am determined,” says the mother of two. Aswathy slept over at the railway station on Monday night and returned to Saraniyavas the next morning to continue with the strike.

‘Guj govt not adhering to Mahatma’s vision of India’

Aswathy says the government, which has scheduled Trumps’ visit to Sabarmati ashram, seems to be impervious to the “shameful irony” the 4-ft wall exposes.

“The Mahatma had said that a country becomes a nation when it wipes the tears off the cheeks of the last man in the queue. While the government wants to show off Sabarmati Ashram to the Trumps, it cannot adhere to the Mahatma’s vision of India. The joke is on the government,” she avers.

‘Awaken the HIndu in you’

Identifying herself as a “true Hindu”, she also has a piece of advice for the BJP government. “Awaken the Hindu in you and you will find a true patriot who treats everyone as equals. That is what Sanatana dharma teaches you. Hinduism champions for ‘loka samastha sukhino bhavantu’ (let the entire world be happy). Where does discrimination fit in here?”

Aswathy Jwala, 33, near the wall erected to mask the slum ahead of Trump visit