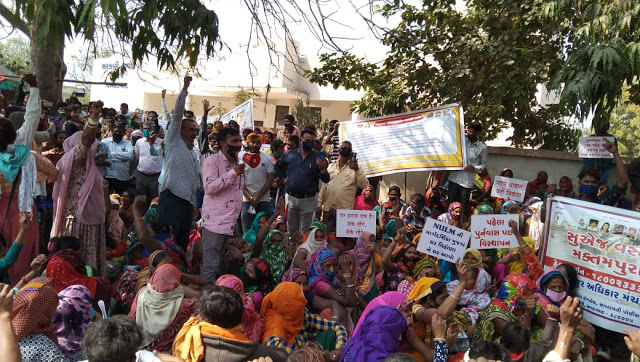 Tuesday, February 16, 2021By Our Representative

Twenty-two people, including the president of the Union Hirabhai and secretary Minaben and leaders of the Struggle Committee, were detained. All of them were released in late afternoon and allowed to submit a memorandum to the district collector.
Those detained include union activists Dinesh Parmar, Ashok Parmar, and Shanti Lal Meena. During the baton charge, a woman leader, Magiben, was injured. She had to be hospitalized by calling an ambulance. Rest of the assembly was forced to disperse

The workers are residents of some 40 settlements of Ahmedabad, inhabited by seasonal and permanent migrants to the city, said Mina Jadhav of the Majuar Adhikar Manch, which had organised the protest. The settlements are not recognized by the Ahmedabad Municipal Corporation (AMC) and bulldozed frequently without any resettlement. Recently, people staying put at Fatewadi near Juhapura were evicted.

The workers have been raising their, demands for last ten year, said Jadhav. The demands include government undertake a survey of unrecognized settlements where they are living; basic public services like sanitation, drinking water, paved roads, and electricity be immediately provided to all the settlements; and no eviction should be carried out without due process of proper rehabilitation.
The demonstrators also demanded revision of the Gujarat Slum Rehabilitation Policy, which promotes public private partnership; shelter for persons counted as homeless in 2018 by the government; implementation of the recently announced Affordable Rental Housing Scheme for migrant workers; and shelters for urban homeless designed to provide accommodation to families who come from outside Ahmedabad.

Patna: At Least 32 Feared Dead in a Stampede at Gandhi Maidan
Mandatory linking of Aadhaar to health and allied social security schemes- Gross Violations of Human...
When beauty is rendered as a tool to assert and/or negotiate spaces.
India's rewritten textbooks talk of demerits of democracy, praise Hitler, underrate Mughals