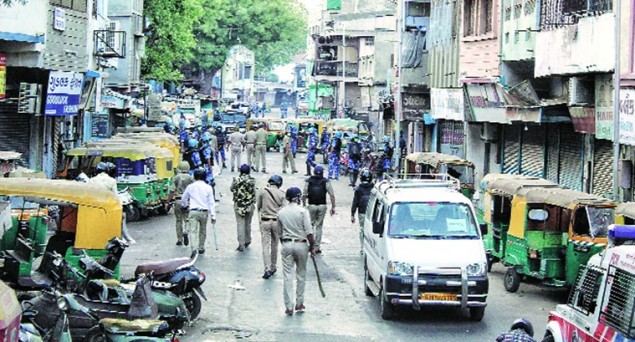 NEW DELHI, MAY 10—After a clash between the policemen and the local people under Shahpur police station of Ahmedabad in Gujarat on Friday evening, as many as 29 persons, including a 60- year-old man, were arrested on charges of attempt to murder, conspiracy and rioting as also Section 51(b) of the National Disaster Management Act (NDMA) and Section 3 of the Epidemic Diseases Act, 1897.

While police claim that the local police were assaulted when a police party was on patrol duty to implement the lockdown and asking people not to sit outside, the locals have a different story to tell. However, police fired 71 teargas shells to disperse the mob. While police claim that one of their personnel sustained injuries in the head, besides small injuries to several others, it is not known immediately if any of the members of the public or stone-pelters suffered injuries in police action.

Many local women say the immediate provocation for the clash were two small incidents that escalated into a big violence between the two sides. According to locals, it was around 6.15 pm, just 15 minutes before the ‘iftar’ or fast breaking time when a woman was going towards her house with a 10 kg bag of ‘aata’(wheat flour) on her head and she was stopped by a police patrolling team. “The policemen not only threw away the flour bag but also made her do sit-ups”, say the locals, adding that this was not only an incident of highhandedness on a woman but forcing her do sit-ups was highly insulting.

In another incident around the same time, another police party beat up a Muslim milk-seller. “The policemen began hitting the milk-seller with baton questioning as to why was he selling milk during lockdown. But the man protested saying that selling of milk is allowed during the lockdown. But the police did not listen to him and continued beating him. When some women came to protect the man, they were also beaten by the police”, alleged several local women. These women also gave their video statements to the media. According to the locals, the police have sealed the shop that sold the wheat flour to this particular woman.

The women told medaipersons that the local police, accompanied by the Rapid Action Force (RAF) came with reinforcement, broke the doors of their houses and committed brutalities. The cops, said the women, beat up whoever came in their sight. “They even threw my one and a half year old kid from my lap and dragged me up to my house while beating me all along”, said a young lady.

Another woman said that they beat up a pregnant lady when she tried to prevent the policemen from beating her brother. “A policeman repeatedly thrust his baton into the abdomen of a pregnant lady. I could not bear it and snatched the baton from the policeman. We cannot remain silent when our men are beaten, particularly a pregnant lady is being assaulted by the cops. This is what Gujarat police did?”, said another woman.

Yet another woman alleged that her brother was performing ‘wuzu’(ablution) outside the house just before ‘iftar’ timings when the police began beating him. “When we objected to the police behaviour, they entered our house, beat my father and us also. They took away my father and brother”, said the woman. She said that “before leaving, the policemen crushed the fruit and other items for ‘iftar’ with their boots leaving nothing for ‘iftar’. They also damaged household goods”.

According to another woman, her husband was looking after their small kid and she was preparing ‘iftar’ in the kitchen. “All of a sudden, policemen entered our house, pulled my husband away and started beating him mercilessly. When I pleaded that my husband is innocent and requested not to beat him up and asked them to let him ‘do ‘iftar’, they pushed me back and threatened to arrest me also. They took him away without allowing him do ‘iftar’. I broke my fast simply by drinking water”, the woman narrated.

Some other women alleged that the cops broke locks of some houses and damaged household goods. The women said that the police suspected that the people might be hiding inside with some people having put lock on the outside.

The locals alleged the police atrocity was repeated the next morning also.

However, sub-inspector H B Chaudhary of the Shahpur Police Station denied the allegations of atrocities. “The police were implementing the lockdown when it came under stone pelting from the local people”, he told India Tomorrow, adding that this resulted into the clash. According to Chaudhary, a policeman was injured in the head in stone-throwing by the mob of around 2,000 persons.

Did Fatigue Plus Hatred Trigger The Violence ?

While local MLA Gayasuddin Sheikh could not be contacted despite several efforts, political analyst Nishant Verma says that the whole incident seems to be a result of “fatigue factor of the police combined with hatred of the police against a section of the population”.

Verma says that “when such an atmosphere prevails, even a small spark can ignite a big fire and that is what happened in Shahpur area of Ahmedabad when the policemen hit a Muslim lady carrying wheat flour, though lightly, on Friday evening”. Moreover, there has been old Hindu-Muslim friction in the area and this also added as fuel to the fire in the background though it was not a communal incident.

“It was a combination of fatigue, hatred and power given to police to deal with lockdown in any manner that led to undesirable and ugly scene in Ahmedabad”, Verma said.

“It is highly condemnable that police broke the doors of the houses, beat up men and women and even children as small as one and a half year old and pregnant woman. I feel very bad about it”, he said.

He alleged that “what happened was the result of decades of hatred nurtured against Muslims in pre-Vijay Rupani era in Gujarat. This is very shameful”. Verma said that the policemen could take action against men involved in stone-pelting but attacking women and children inside the houses could never be justified. He demanded action against policemen responsible for attacks on women and children.

Verma said that the Shahpur clashes also appeared to be a consequence of the “political friction between the local Police Inspector R K Amin and local MLA Gayasuddin Sheikh. It could also be one of the triggers for the ugly incident”.