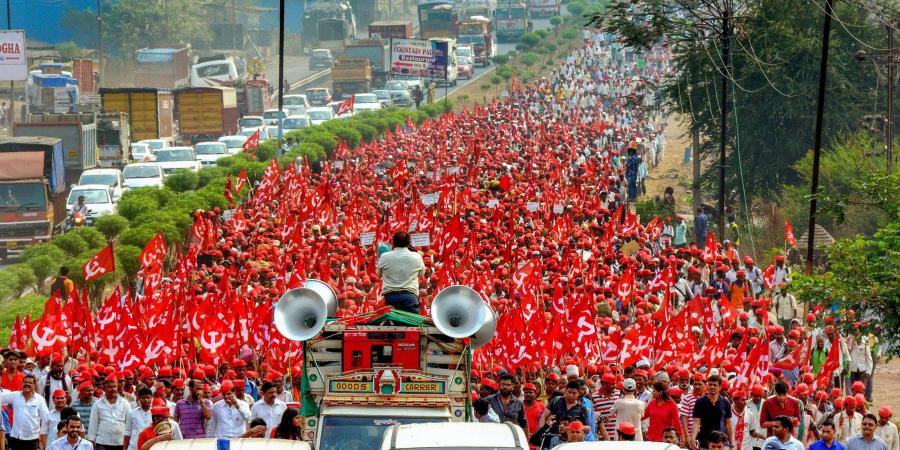 All India Kisan Sabha’s (AIKS) Maharashtra unit will begin a statewide Vehicle March of 20,000 farmers from Nashik to Mumbai today January 23 on the occasion of the birth anniversary of Netaji Subhash Chandra Bose. The March will start in the afternoon from the Golf Club Maidan in Nashik in hundreds of tempos, pick ups and other vehicles.  This March is being held to support and expand the historic two month long farmers struggle in Delhi for the repeal of the three Farm Laws and for a central law to guarantee a remunerative MSP and procurement all over the country.

Along with the AIKS, the CITU, AIAWU, AIDWA, DYFI and SFI will also mobilise workers, agricultural labourers, women, youth and students from the state for this March.

After leaving Nashik, the Vehicle March will halt for the night at Ghatandevi on the night of January 23. On January 24 morning at 9 am, 20,000 peasants will march down the Kasara Ghat and resume their Vehicle March to Mumbai.
The Samyukta Kisan Morcha (SKM) has given a nationwide call for struggle from January 23 to 26, including rallies to the Governors of states.
Accordingly, over 100 organisations affiliated to the All India Kisan Sangharsh Coordination Committee (AIKSCC), Trade Unions Joint Action Committee (TUJAC), Struggle Committee of Mass Movements (JASS), Nation for Farmers and Hum Bharat ke Log came together and formed the Samyukta Shetkari Kamgar Morcha (SSKM) (Maharashtra) in a meeting held in Mumbai on January 12.
The SSKM has called for a massive joint sit-in or mahapadav at Azad Maidan in Mumbai from January 24 to 26. The AIKS Vehicle Jatha will merge in this mahapadav on January 24 afternoon.
On January 25, there will be a massive public meeting at 11 am. AIKS National General Secretary, one of the leaders of the SKM and ex-MP Hannan Mollah, top leaders of all the three parties in the ruling Maha Vikas Aghadi in the state and leaders of the Left and democratic parties will address this meeting. After this at 2 pm, the huge rally will march to the Raj Bhawan and submit a memorandum to the Governor.

The main demands of the rally are: Repeal the three anti-farmer, anti-people and pro-corporate Farm Laws, Enact a central law guaranteeing remunerative MSP and procurement, withdraw the Electricity Amendment Bill, Repeal the four Labour Codes, Vest all Forest lands, Temple lands, Pasture lands etc in the names of the tillers, and resume the implementation of the Mahatma Phule Loan Waiver Scheme for farmers, which had been suspended due to the Covid pandemic.