The number of hungry people in the world has increased for the first time since the turn of the century, sparking concern that conflict and climate change could be reversing years of progress.

In 2016, the number of chronically undernourished people reached 815 million, up 38 million from the previous year. The increase is due largely to the proliferation of violence and climate-related shocks, according to the state of food insecurity and nutrition in 2017, a report produced by five UN agencies. 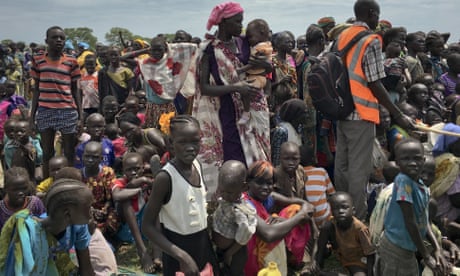 Cindy Holleman, a senior economist at the Food and Agriculture Organisation, said it was hard to know whether the increase was a blip or marked the reversal of a long-term trend. However, she said the rise in conflict and climate change – factors that rank alongside economic slowdown, which makes food hard to access for poor people, as key drivers of food insecurity – was cause for concern.

“Whether it has been a blip and it’s going to go back down again, we’re not sure,” said Holleman. “But we’re sending warning signals. We are sending a message that something is going on.

“If you look at the 815 million [chronically undernourished] people, 489 million or 60% of them are located in countries affected by conflict. Over the last decade we’re seen a significant increase in conflict. We also see that conflict combined with climatic effects is having a significant effect.”

A foreword to the report, written jointly by the heads of the five UN agencies, said: “Over the past decade, conflicts have risen dramatically in number and become more complex and intractable in nature.

“This has set off alarm bells we cannot afford to ignore: we will not end hunger and all forms of malnutrition by 2030 unless we address all the factors that undermine food security and nutrition. Securing peaceful and inclusive societies is a necessary condition to that end.”

Oxfam’s head of food and climate change, Robin Willoughby, said:
“This must act as a wake-up call for international leaders and institutions to do more to resolve the catastrophic cocktail of climate change and conflict around the world. Global failure to tackle these issues affects us all, but it’s the world’s poorest who will suffer most.”

The report is the first UN global assessment of food security and nutrition following the adoption of the sustainable development goals, which aim to end hunger and all forms of malnutrition by 2030.

Progress has been made on reducing global hunger, which affected more than 900 million people at the turn of the century. Over the past year, however, hunger has reached an “extreme level” in many parts of the world, with famine declared in South Sudan in February, and Yemen, north-east Nigeria and Somalia considered on the brink.

People living in countries affected by protracted crisis are nearly two and a half times more likely to be undernourished than those living elsewhere, the report said.

Chronic child malnutrition continues to fall, but at a slower rate in some regions, the report found. Wasting remains a threat to the lives of 52 million children.

Overweight and obesity rates in children are rising in most regions, and in all regions for adults. Such “multiple burdens” for malnutrition is a “cause for serious concern”, said the report.

Africa has the highest levels of severe food insecurity, affecting 27.4% of the population – almost four times that of any other region. Higher food insecurity was also observed in Latin America, rising from 4.7% to 6.4%.https://www.theguardian.com/global-development/2017/sep/15/alarm-bells-we-cannot-ignore-world-hunger-rising-for-first-time-this-century

Alleged killers, arsonists and rapist are in the fray today
The Imam Who Saved Not Just Asansol, But Perhaps India From Burning
India- Bureaucratisation of Violence and Kafka in Chhattisgarh
Jignesh Mevani- `Modi is talking due to our pressure'