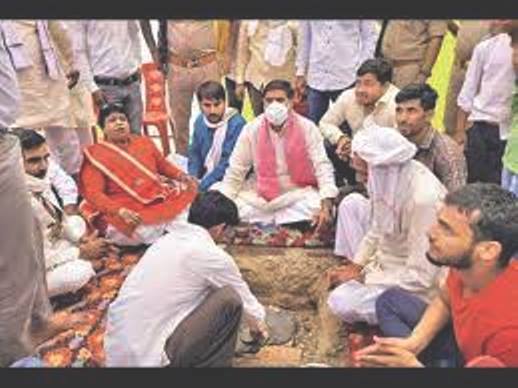 AGRA: Almost a month after a Dalit wedding procession was allegedly assaulted by members of another community near a mosque in Noorpur village in UP’s Aligarh, BJP MP Satish Gautam has laid the foundation stone for construction of a temple 300 metres from the mosque.

The mosque in the village was at the centre of a row following a scuffle that took place after the wedding procession on May 26 was allegedly asked to stop playing music until people had offered their prayers. Police later booked 11 people for rioting.

The matter had snowballed and Vishva Hindu Parishad (VHP) leader Sadhvi Prachi had announced that she would perform a havan at the mosque. She didn’t turn up but some saffron outfits tried to enter the village. They were, however, stopped by police.

Talking to TOI, Gautam said since there was no temple in the village, he had decided to build one. “This was a demand of the Jatav community in the village. So we laid the foundation stone on Monday keeping their sentiments in mind,” he said.

Virendra Kumar, who belongs to the Jatav community, said he was not aware of any such demand by their community. “We only follow Dr B R Ambedkar and his ideology. But a few people from Dalit community have recently joined the BJP and may have put forth this demand.

No Riots in Gujarat, MP, UP & Chhattisgarh After Our Govts Came To Power: BJP Chief Amit Shah. All C...
86 students and workers arrested in Dili, East Timor during May Day
Another petition in SC challenges mandatory  #Aadhaar for mid-day meals etc
Bihar - Muslim Boy with Tricolour found dead