A long night in Berkeley.

A planned talk at the University of California, Berkeley, by alt-right lightning-rod Milo Yiannopoulos has been canceled after protests erupted on campus.

Yiannopoulos is an editor at Breitbart, the far-right online publication, and is a self-professed “mouthpiece of Trump-Pence.” He is in the midst of a campus speaking tour that has attracted intense ire from student groups around the country. Similar protests broke out last month at University of California, Davis, shutting down his appearance there, and at University of Washington where a protestor was shot.

An estimated 1,500 protesters descended on UC Berkeley’s Sproul Plaza for the demonstration. During the evening, windows were smashed at the student union, and a portable light pole generator was torched, sending flames into the night sky and setting a nearby tree on fire.

Shortly after 6:00 p.m., two hours before Yiannopoulos was scheduled to speak, university police called off the event.

A statement released by the university said campus police determined the event could no longer take place “amid violence, destruction of property and out of concern for public safety.” It went on to defend the university’s decision to host the event in the first place, arguing that “while Yiannopoulos’ views, tactics and rhetoric are profoundly contrary to our own, we are bound by the Constitution, the law, our values and the campus’s Principles of Community to enable free expression across the full spectrum of opinion and perspective.” 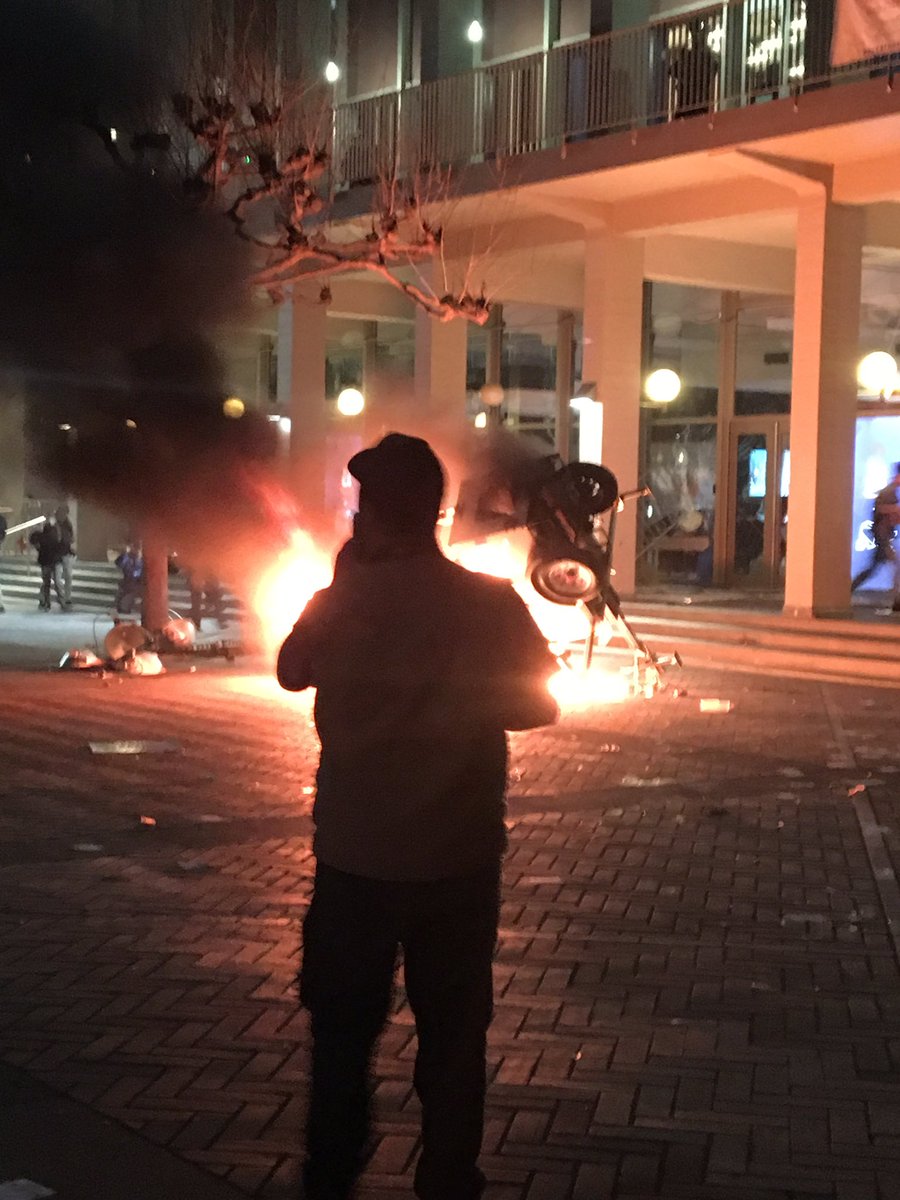 “We came here tonight to help make sure this event did not happen,” said Nick Pardee, 26, protesting with a group from the Party for Socialism and Liberation. “We came here to prevent the hate speech that leads to acts like the shooting in the Quebec mosque the other night.”

One man who wanted to be referred to as “Red,” said, “You have to confront fascism and not let it advance or give it a platform. You can’t even allow the platform to spew their bullshit.”

“This should be standard practice,” he added. 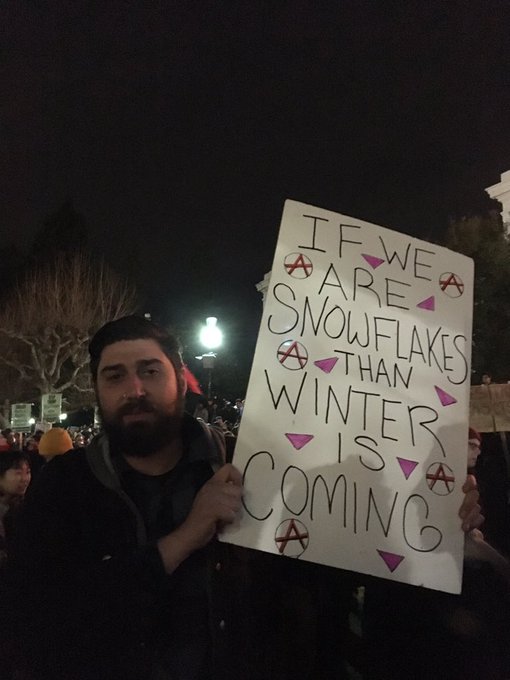 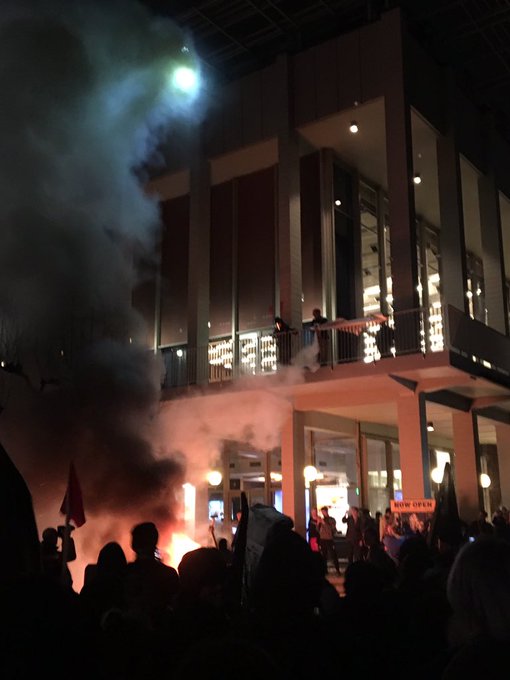 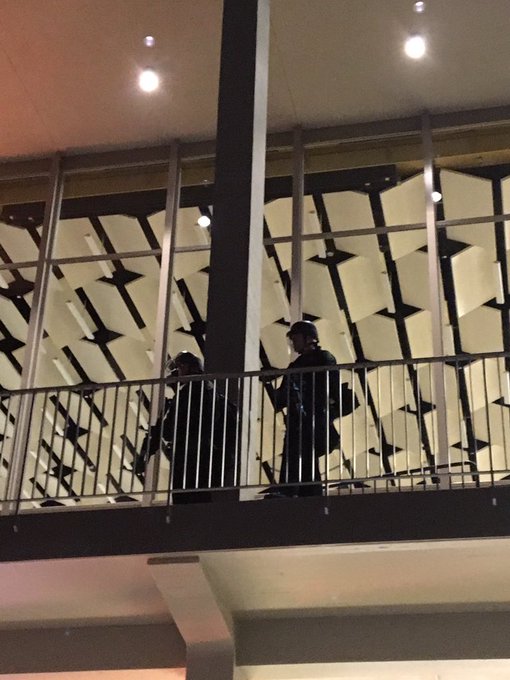 Police giving protestors ten minutes to disperse. Of course, no one seems to be leaving. #MiloYiannopoulos at UC Berkeley

Angelie Castenada from Fremont, Calif., however, paid $5 for the event and said protesters were going against something UC Berkeley has always stood for. “I’m disappointed, because since the 60’s, UC Berkeley was an arbiter of the free speech movement, and even if it’s a conservative opinion, schools should be allowing speech of all kinds.”

Eddie Brock, former Cal student “This is what happens when you let anti-Fascist, Fascists into a protest.” Says was “hit for disagreeing.” 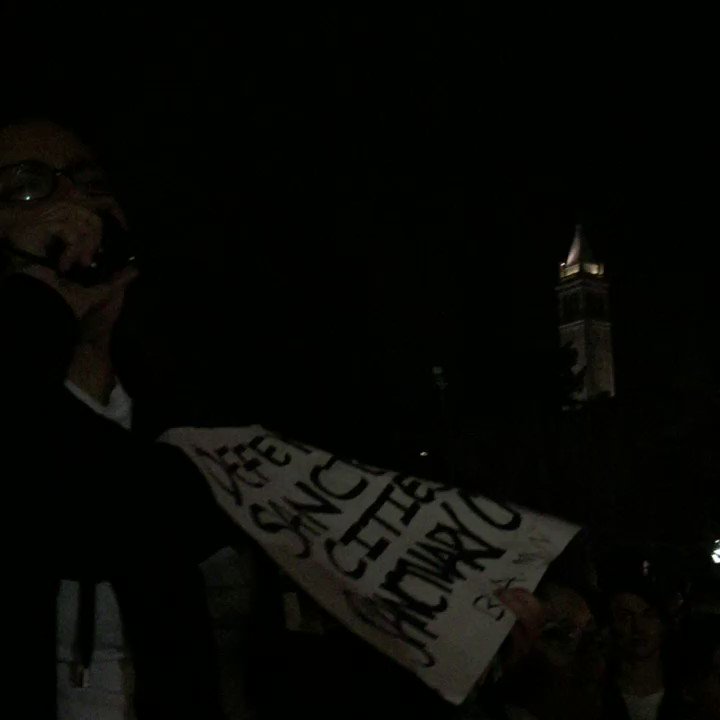 There were lighter moments during the protests, too: Drum circles, dancing, and chants of “Immigrants are welcome here” were all in abundance.http://m.motherjones.com/politics/2017/02/uc-berkeley-riot-milo-yiannopoulos