On 12 December, BJP National President Amit Shah was in Chhattisgarh on the occasion of 13th anniversary of Raman Singh government.

But while he was praising the state government in the state capital Raipur, villagers in Bijapur’s Timmapur were surrounding a local CRPF camp while shouting slogans against the alleged atrocities of the police. The protestors were angry over the death of one local and the injury of another, allegedly at the hands of the security forces. 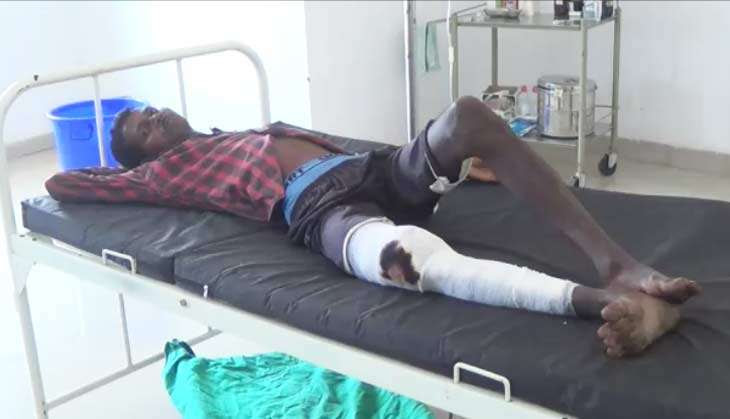 According to locals, the police fired at the youths on the night of 11 December. Poonem Nandu, one of the victims, died on the spot. The other was shot in the foot and is being treated at a hospital in Raipur.

The villagers claim both had gone to guard their fields when the incident occurred. However, the police and security forces have denied the accusations.

“The slain youth, Nandu, was the son of Suklu Poonem, the Usoor block Congress Committee president”

The 168th battalion of CRPF is camped at some distance from Timmapur. The police officials say a team of CRPF jawans was returning from a search operation when they heard a suspicious noise in the fields. Soon, they came under fire and the youths were killed in the retaliatory action.

The residents of Timmapur are contesting this account. They maintain there was no encounter at the site and the police jawans fired without provocation.

A score to settle?

The slain youth, Nandu, was the son of Suklu Poonem, the Usoor block Congress Committee president. Suklu insists his son had nothing to do with the Maoists. “He used to provide refreshments and vegetables for the CRPF jawans on many occasions,” he claims.

If Suklu is to be believed, Nandu was asked by the local police to gather information about women Maoists active in the area. But Nandu had refused to work as a police informer. “They killed my son to settle this score,” Suklu alleges.

The Congress MLA from Konta, Kawasi Lakhma, and District President Vikram Mandavi visited Timmapur after the incident. There were heated arguments between Congress leaders and CRPF officials during the visit.

The latter were allegedly refusing to hand over the dead body of Nandu, provoking the villagers to raise slogans against the government and the security forces.

Kawasi Lakhma has accused the government of conspiring to wipe out Adivasis from the region under a well-planned strategy. “The government wants to hand over the entire Bastar region to corporate companies. But the Adivasis are coming in their way,” Lakhma says.

Meanwhile, a local Adivasi organisation had called for Bijapur bandh on 13 December to protest against the alleged police excesses.

The Bijapur SP K L Dhruv says the police had credible information about the Maoist conspiracy to carry out a big incident in the area. It was upon this tip-off that CRPF jawans were carrying out search operations. “An encounter ensued between these jawans and the Maoists when they were returning from the search operation. A youth was caught in the firing and he succumbed to his injuries,” Dhruv says.

Dhruv also informed the media that the CRPF has taken seven other locals and will be questioning them. “They will be released if found innocent,” he says.

Nevertheless, the administration has ordered an enquiry. However, the probe is restricted to finding out whether the victims were Maoists or not.