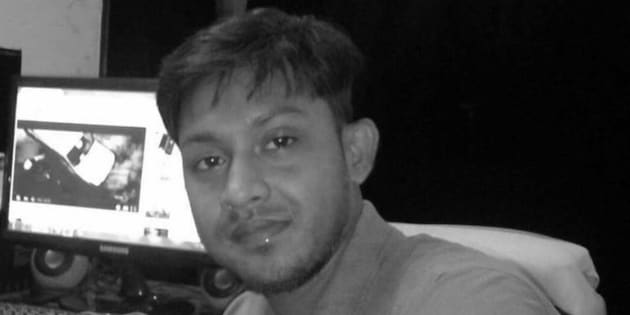 Twenty-eight-year-old Santanu Bhowmik loved a good story. The young Tripura journalist would always rush to cover any breaking news, determined to get the first scoop, the exclusive details, and the live-from-ground-zero shots.

So when a clash broke out between the Indigenous People’s Front of Tripura (IPFT) and the Tripura Rajaer Upajati Ganamukti Parishad (TRUGP) on Wednesday, the television journalist was determined to be first to the spot. He needn’t have worried — most news channels refused to send their reporters, considering the situation too unstable. Bhowmik was one of the only journalists at Mandai, about 45 kilometres from Tripura’s capital Agartala, his news organisation told HuffPost India.

He recorded a part of the clash with a local stringer for their media organisation Channel Dinraat, explained their editor-in-chief Samir Dhar.

“While Santanu tried to record visuals, the mob gave him chase,” Dhar told HuffPost India over the phone from Tripura, adding that Bhowmik left the spot and sent the channel the footage he had taken. “We asked him to come back as soon as possible.”

However, after he parted ways with the stringer, he received a tip-off that the clashing groups had set a police van on fire. He rushed back to the spot and tried to take a video using his mobile phone. It was at this point when members of the mob are believed to have hit him with a stick and dragged him inside before beating him to death. He had been stabbed multiple times, the police found.

“It was basically a lynching, and he was dead on the spot,” said Dhar.

Colleagues in Tripura remember him as a fearless journalist, always eager to get the best story. “Journalism was his passion,” Bhowmik’s former colleague Tanmay Chakraborty told HuffPost India. Bhowmik’s first job was at the television channel Khabar 365 Din, which he joined in January 2013, and was soon reporting to Chakroborty, who joined a few months later.

“He would always be the first to rush to cover a story,” recalled Chakroborty. “He liked covering conflict.”

Though most of his colleagues remembered him as a quiet, polite person, on the field he was brave and committed. “He loved being part of a newsroom and was very enthusiastic,” recalled Rajib Chakraborty, who also worked with Bhowmik in Khabar 365 Din.

Chakroborty, who worked as chief anchor at the television channel, said Bhowmik “was also very good-natured and easygoing,” recalling how he would hand over handwritten scripts from the field in his sometimes hurried, illegible scrawl, asking others in the newsroom to help him edit it on Microsoft Word. “I can’t help remembering these details now that he’s gone,” said the Agartala-based senior journalist.

He described how Bhowmik was the sort of journalist who would come two hours early to work, and was always eager to work extra hard on all news stories. He also had a keen interest in national issues, and would follow news from across the country.

After working for two-and-a half years there, Bhowmik joined a local television network Channel TV 24 where he worked for about a couple of months. Earlier this year, he joined Channel Dinraat, a society-run TV channel that opened in April this year. He was earning about ₹6,000 per month.

His news beat was IPFT, a tribal party in Tripura supported by various militant outfits. Their main demand is for an autonomous state ‘Tipraland’. According to Bhowmik’s editor Dhar, the young journalist covered the party relentlessly, exposing how the Bharata Janata Party was secretly funding the organisation to disturb peace in Tripura, a claim echoed by the local Congress party chief in the state.

Bhowmik also ran a small nursery school from his home, ‘Manobik Nursery’. ‘Manobik’ means humane in Bengali, and this was part of Bhowmik’s larger dream of doing social work, say his friends. He had recently sent his younger sister to study in Gangtok in Sikkim, and was proud of that.

He is now survived by her and their mother, a government clerk, and the only earning member of the family. Bhowmik’s father had reportedly left when the children were very young.

Four people have been arrested in connection with the brutal killing of the young journalist, who died despite heavy police presence at the spot. Political parties have been quick to use the killing as way to place blame, even as the state gears up for assembly elections next year.

The Committee to Protect Journalists (CPJ) condemned the killing, noting that at least 41 journalists have been killed in India since 1992, in relation to their work.

“Authorities must thoroughly investigate the motive behind the murder of Santanu Bhowmik, who was killed while on assignment,” said Steven Butler, CPJ’s Asia Program Coordinator in Washington D.C. “Authorities must swiftly bring Bhowmik’s killers to justice, and ensure the future safety of journalists working in India.”