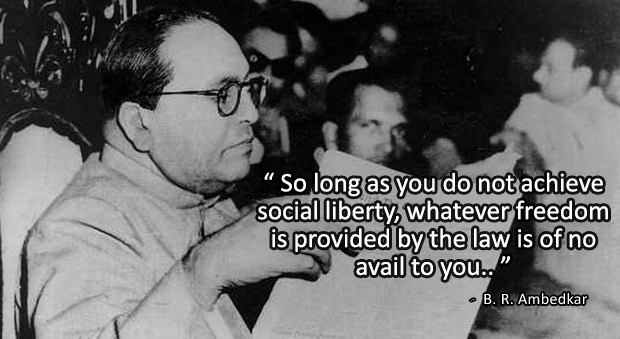 Events of the last few days indicate AAP and BJP worship Ambedkar purely for electoral gains and not from commitment to his ideas.

Recently, Aam Aadmi Party (AAP) leader and minister in Delhi, Rajendra Pal Gautam, was forced to resign after he attended an event on Ashok Vijayadashmi, 5 October, in the city. The program was a Buddha Dharma Deeksha Samaroha, attended by thousands of people, mostly Dalits, for whom it was a solemn occasion to embrace Buddhism and renounce Hinduism. They followed in the footsteps of the first law minister of independent India and head of the Drafting Committee of the Indian Constitution, Dr BR Ambedkar. As in 1956, the Samaroha involves taking twenty-two vows. Those accepting Buddhism are expected to give up worshipping Hindu gods and goddesses such as Bramha, Vishnu, Mahesh, and Gauri and adopt humanism, non-discrimination, honesty, non-violence, truthfulness, etc.

The irony is that the RSS can oppose Ambedkar’s twenty-two vows while garlanding his portraits. The presence of Gautam at the event infuriated the Rashtriya Swayamsevak Sangh (RSS) and its affiliates to such an extent they launched a campaign to label Gautam anti-Hindu. Equally remarkable was the attitude of the AAP, which runs the government in Delhi but did not support its leader and minister. These are odd responses since both outfits claim to worship Ambedkar and display his portraits prominently in government offices. Yet their reactions have demonstrated how easily the RSS, whose offshoot Bharatiya Janata Party (BJP) controls the wheels of power at the Centre, and the AAP, did away with Ambedkar’s ideas and words and the values he laboured for all his life.

A group of BJP workers assembled outside Gautam’s home and shouted slogans against him then hoisted a saffron flag bearing an image of lord Rama. Social media and the pro-government media went overboard, alleging Gautam insulted Hindu gods and goddesses at the event. Delhi BJP president Adesh Gupta filed a complaint against Gautam, and Delhi Police have questioned him. Posters appeared in election-bound Gujarat labelling the Delhi Chief Minister Arvind Kejriwal as anti-Hindu. Kejriwal quickly said he was born on Krishna Janmashtmi and is an ardent Hindu, then expressed displeasure at Gautam taking the twenty-two vows.

Finally, Gautam resigned. As clarified repeatedly, the vows people took on 5 October were those Ambedkar had administered to nearly three lakh followers in 1956. The vows have a prominent place in his writings and ask followers not to worship Hindu deities. In no way, however, are the Hindu gods insulted.

The RSS-BJP combine’s complex strategy to woo Dalits while undermining their biggest political icon in modern India, and Kejriwal’s hollow iconisation of Ambedkar, became apparent from the entire episode last week. The RSS holds Ambedkar as worthy of pratah samaraniya, or one we should remember in the mornings. Even prominent leaders from the RSS background, including Prime Minister Narendra Modi, have said they owe their careers to Ambedkar’s struggles for equality and justice. RSS outfits often celebrate Ambedkar’s birthday with pomp and show.

The other side of the coin is eulogising Ambedkar, which is part of the RSS’s plan to change India into a Hindu Rashtra. Naturally, it goes against what Ambedkar stood for. (As was the formation of the RSS a century ago to counter the ‘non-Brahmin’ movement in the Nagpur area). While the anti-caste campaign targeted caste-based hierarchies, the RSS initially sought to combine all Hindus under one umbrella without dealing with caste’s deep social and economic roots. The RSS eulogised a mythical golden past, best exemplified in Brahmanical imposition and a State that would, in the future, follow the Manusmriti’s commandments. Gradually, the RSS altered its strategies and language. It retains the core plan for a Hindu nation, but with the Hindu Mahasabha, it sought a Hindu nation in contrast to secular democratic India created in 1947. It undoubtedly found an opposite twin seeking an exclusively Muslim country in the Muslim League.

Ambedkar found both religion-based nationalisms worthless and stood for social justice and a secular state. In the revised edition of his book on Pakistan, he opposed the demand for a new country since it may pave the way for a Hindu nation in the vast swathes that remained of British India beyond Pakistan. Ambedkar foresaw calamity for the Scheduled Caste and Scheduled Tribes in this vision of religion-based countries. Conversely, the RSS criticised his draft of the Constitution for borrowing western ideas and ignoring what they considered glorious in the Hindu holy books.

On caste, Ambedkar never wanted anything short of its abolition. His Constitution continued the reservation policy to create conditions over time that would annihilate caste differences and discrimination. The opposition to reservations in the dominant communities surfaced as anti-Dalit violence in Gujarat in 1981 and similar violence in 1986 against backward classes seeking job reservation.

After India implemented the Mandal Commission award, the RSS strengthened its movement to demand a Ram temple where the Babri mosque stood. Former prime minister Atal Bihari Vajpayee neatly described this phenomenon when he said Mandal needed a response, found in the Kamandal, or Hindu religion.

Thus the RSS can undermine affirmative action for Dalits and backward sections, as it did by introducing reservations for the Economically Weaker Sections a couple of years ago. It has co-opted members of the Dalit, backwards, and Adivasi communities through what is often called “social engineering”. It floats organisations that win over communities to its Hindu Rashtra agenda, such as the Samajik Samrasta Manch for Dalits and backwards, the Vanvasi Kalyan Ashram for Adivasis, and many others. The heroes of subaltern communities are selectively presented to them as the historical opponents, if not enemies, of Muslims. The best example is Raja Suheldev, from the Passi Dalit community, whom it first glorified, then gave an anti-Muslim slant.

Dalit leaders have been drawn to the power of the BJP, especially since 2014 when it began sweeping national elections. It helped the RSS dig its electoral and ideological roots among communities who were accorded a lowly status in the Hindutva pantheon. The RSS also does Seva, or service, in a form that undermines affirmative action.

Is it a surprise Gautam resigned once his party did not stand up for him? It also did not stand up for the rights of citizens to pick and choose their religious identity. Indeed, it betrayed the cause of social justice for which Ambedkar struggled. It would be hard to forget that Kejriwal was active in Youth for Equality, which sought to undermine affirmative action for the historically marginalised. It would appear from the events of the last few days that Ambedkar was made into a significant icon in the AAP-ruled States purely for electoral gains and not ideological commitment. It is a charge the party would find hard to contest.

The author is a human rights activist and formerly taught at IIT Bombay. The views are personal.