Ambedkar’s statue was unveiled at Ambedkar House on April 14, the Mulnivasi leader’s 127th birthday. Ambedkar lived in the house from 1920-23 while obtaining his doctorate at the London School of Economics and studying for the Bar course at Gray’s Inn. “It was a joyous occasion for us to celebrate Babasaheb here, where he spent years as a student,” says Jeram Patel, a Patidar activist from Gujarat. “It was an opportunity to demonstrate how Ambedkarism is a philosophy relevant beyond the narrow geographical confines of the Indian subcontinent.”

“We decided to raise the black flag to Modi after it came to light that he would try to steal the limelight by staging a secondary inauguration ceremony of Babasaheb Ambedkar’s statue during his UK visit on April 19,” says Ambedkarite activist Shekhar Bodhakar.

Hoisting black flags, Bodhakar and Shri Kant Borkar stood at the entrance to Ambedkar House. They lined the sidewalk with placards featuring photos of Narendra Dabholkar, Govind Pansare, M. M. Kalburgi, Gauri Lankesh, Rohith Vemula, and Asifa — all photos were captioned “Who Killed?” Dabholkar, Pansare, Kalburgi, and Lankesh were Indian intellectuals assassinated in recent years. Vemula was a Dalit student driven to suicide after being suspended from university for peaceful protests.

Placards featuring photos of those killed under Hindutva

Modi has faced relentless protests by a wide range of Indian diaspora communities during his multi-day visit to the United Kingdom. On April 18, he presented to a pre-screened audience of about 1500 at London’s Central Hall in Westminster, remarking, “Mahatma Gandhi made the struggle of freedom a people’s movement. I am making development a people’s movement.” Meanwhile, outside, protestors outnumbered the audience as they flooded Parliament Square.

After the event, reports The Wire, Modi “went about garlanding Gandhi’s statue in Parliament Square and inaugurating B.R. Ambedkar’s house.” The Prime Minister’s garlanding of Modi was similarly protested by another group of protestors but for a different reason. “Gandhi was a caste apologist, an anti-black racist, and a sexual predator on members of his own family,” says Sikh activist Simran Singh Bhinder. “When Modi groveled before an idol of his hero, Gandhi, we raised the black flag.” 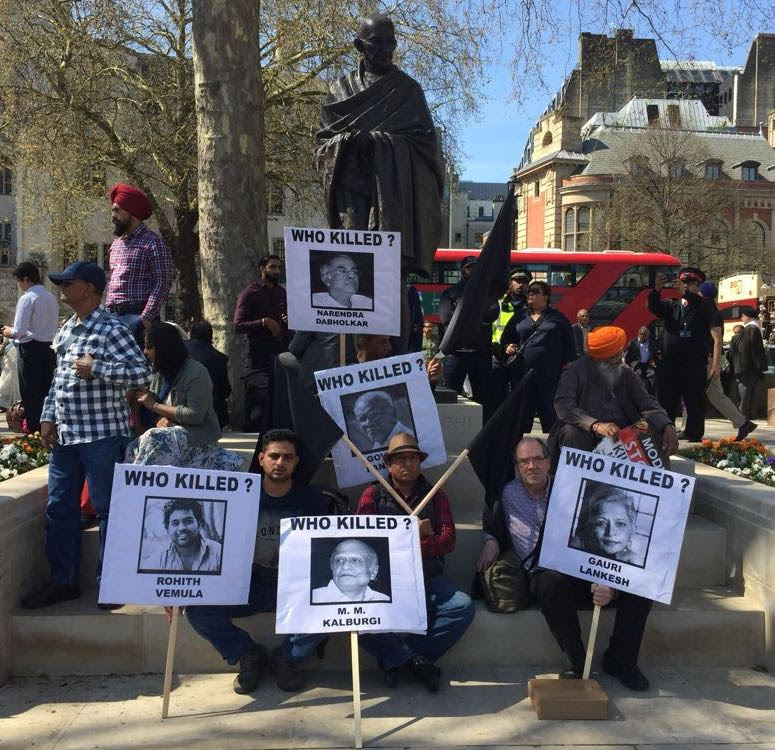 Bhajan Singh, Founding Director of Organization for Minorities of India (OFMI), heartily congratulates the protestors. “Bodhakarji is a giant of a man with courage harder than steel,” says Singh. “Babasaheb Ambedkar stood for the annihilation of caste, while Modi and his Hindu nationalist Bharatiya Janata Party are the most prolific purveyors of caste, oppression, and brutalization of the marginalized — especially Mulnivasi Bahujans — which India has seen in generations. It’s rank hypocrisy for Modi to celebrate Ambedkar.”

“Dr. Ambedkar warned that India is a land possessed by inequality in social and economic life,” remarks OFMI spokesperson Arvin Valmuci. “India is a democracy, yet Ambedkar argued that the fabric of Indian society is fundamentally anti-democratic because, through the caste system, it denies the principle of one person, one value. Modi follows the ideology of Hindutva, which says only Hindus have value; Ambedkar refused to die a Hindu and converted to escape caste. Hindutva is the ideological enemy of Ambedkarism.” 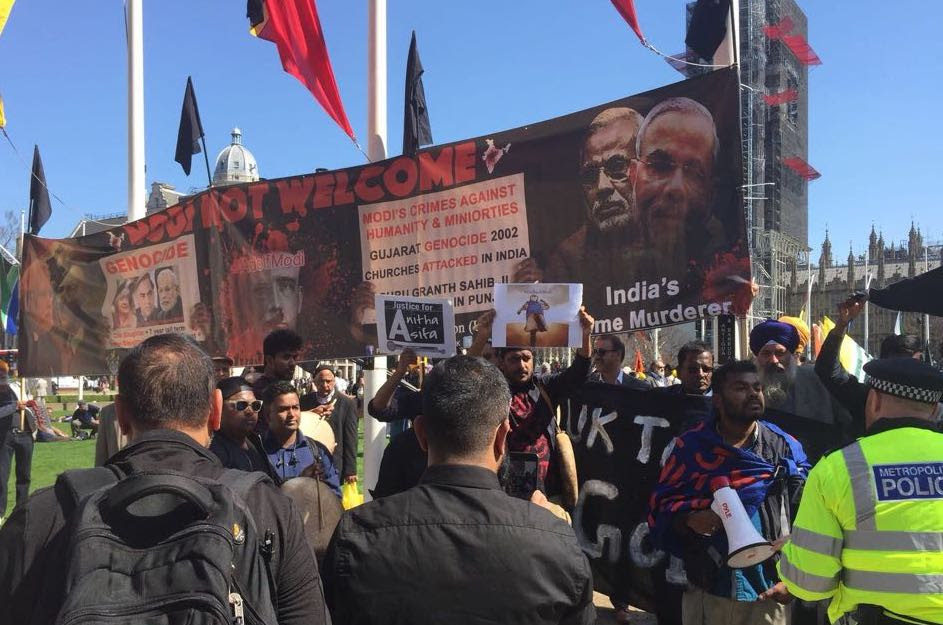 PM Modi directs destruction of 1.5 lakh files - to get rid of embarrassing evidence against the RSS...
Sexual Harassment at work - Mumbai second in shame list #Vaw
Beyond Abortion: Roe v. Wade and the Right to Privacy #womenrights
Women at the top of the world, still not at the center