Amir Rizvi – My First Roza was in a Durga Pooja Pandal 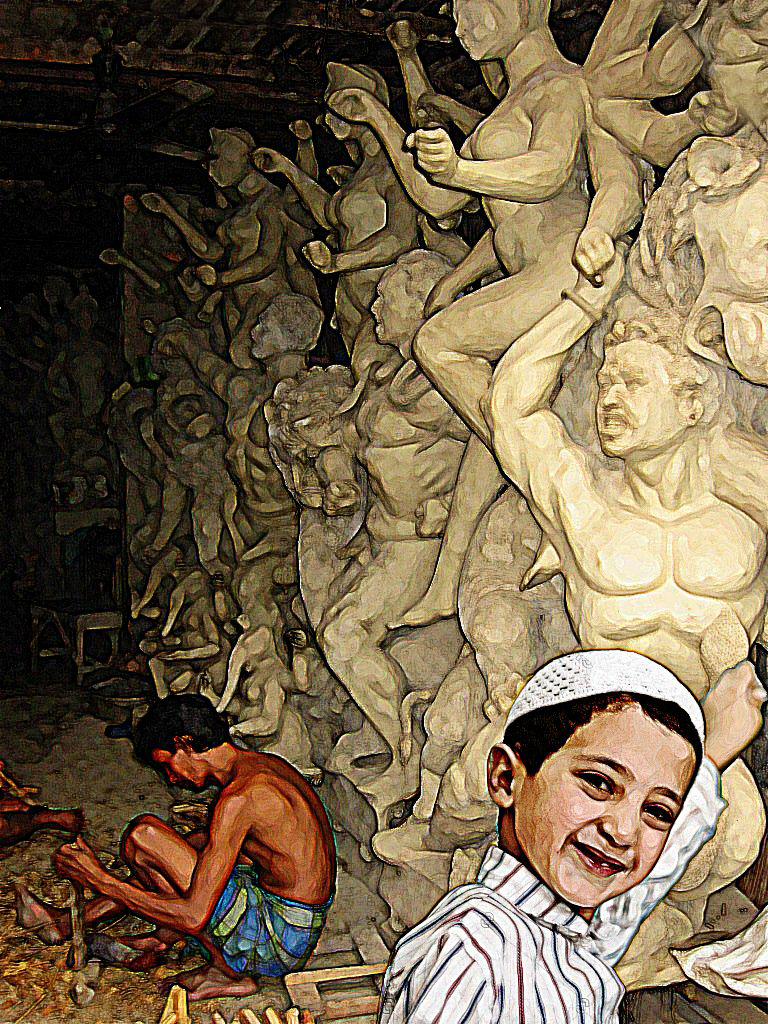 I don’t remember when I started praying and keeping my Rozas ( the fast during Ramzan). Every child starts aping their parents and I guess I used to do the same. During Ramzan as kids we had the half ticket concept, either fast for half a day “aadhe din ka roza” or the more popular was “aadhe mooh ka roza”: we were allowed to eat using one side of the mouth. The right side of the mouth was the favorite side to chew among us, kids.

We lived in a joint family and there were siblings and cousins of similar ages.

Even our pet parrot Mitthu used to ape the rituals of the home, he was taught to say “Nabiji Rozi bhejo” (Prophet Ji send us bounty). Often, we got confused on whether it was “Dada Abba” (Grandfather) praying or our Mitthu, he used to make gibberish-like sounds which resembled, in sound, the tilawat (Quran recital). Many a time we got up in the night wondering what was wrong with Dada Abba, why is he praying so loud at this hour, and found Mitthu happily busy with his tilawat.

We lived in the Rourkela Steel City. In Odisha, it was very cosmopolitan with neighbours from all over India. Many of my non-Muslim neighbors used to join us during Iftar (breaking the fast during Ramzan) and similarly we used join in the feasts after their Pooja(s) and Havan(s) (Hindu prayers).

I remember my first Roza, a serious Roza of not eating the entire day, it was one of the biggest achievements of my life; I wanted to prove that even I was grown up, I could achieve this; I was about 6 years old.

My mom dissuaded me initially saying it is not a compulsory ritual for children, but I did not think I was a child and insisted on keeping the Roza. Getting up during Sehri was an adventure, the most exciting part of keeping Roza, (Sehri was at about 4am in the morning) and the excitement lay in eating the last meal before fasting.

There was a Durga Pooja Pandal near our house, and those days the artisans used to make large installations of the Durga goddess on the site itself. Their work used to begin 2-3 months in advance. I was completely fascinated by the making of those elaborate Durga Pooja installations. Sometimes I used to spend entire day admiring the process and Amma (Mom) used send someone to call me for lunch.

When I insisted on keeping my first Roza, Amma knew I would not feel hungry if I was at the Pandal; so she asked my elder brother to drop me off at the Pandal in the morning. There I spent the entire day, at the Durga Pooja Pandal, chatting with the artisans, playing with their clay. Amma was right, I did not feel thirsty or hungry, did not even realize it was my first Roza, it was almost evening when my brother came to call me home, for Iftar.

After 40 years of my first Roza, when I look around at our mohallas and cities, society at large, I see a huge difference. Practising the faith was easy and relaxed, there was little conflict, parents had no problem sending Muslim children to play at the Pooja Pandal, non-Muslims never had any issue with Muslim festivals. There was no television and no religious preachers entered our lives. Our faiths and religious sentiments were not so fragile that we needed religious fatwas.

With the increasing influence of Arabian practices on Indian Islam, (an Arabisation, a sort of purification of Islam started taking place) and many Indian practices have started changing. “Khuda Hafiz” has become “Allah Hafiz” because Khuda is a Persian word. Ramzan is becoming Ramadan, because in Arabic it is pronounced with a “d”, not a “z”. And visiting Durga Pooja Pandal has become Shirk (the sin of practicing idolatry or polytheism).

I see similar changes in Hindu society, where people are going back to the so called “Vedic Era” and becoming more intolerant towards each other.

One by one, they died: The forlorn story of tribal children’s death in Odisha
Nuclear test for Narendra Modi in US pact
Misogynist Bullying of Rhea Chakraborty Is A Travesty of Justice for Sushant Singh Rajput
Jeetan Marandi still behind Bars,after being acquitted by Jharkahnd HC